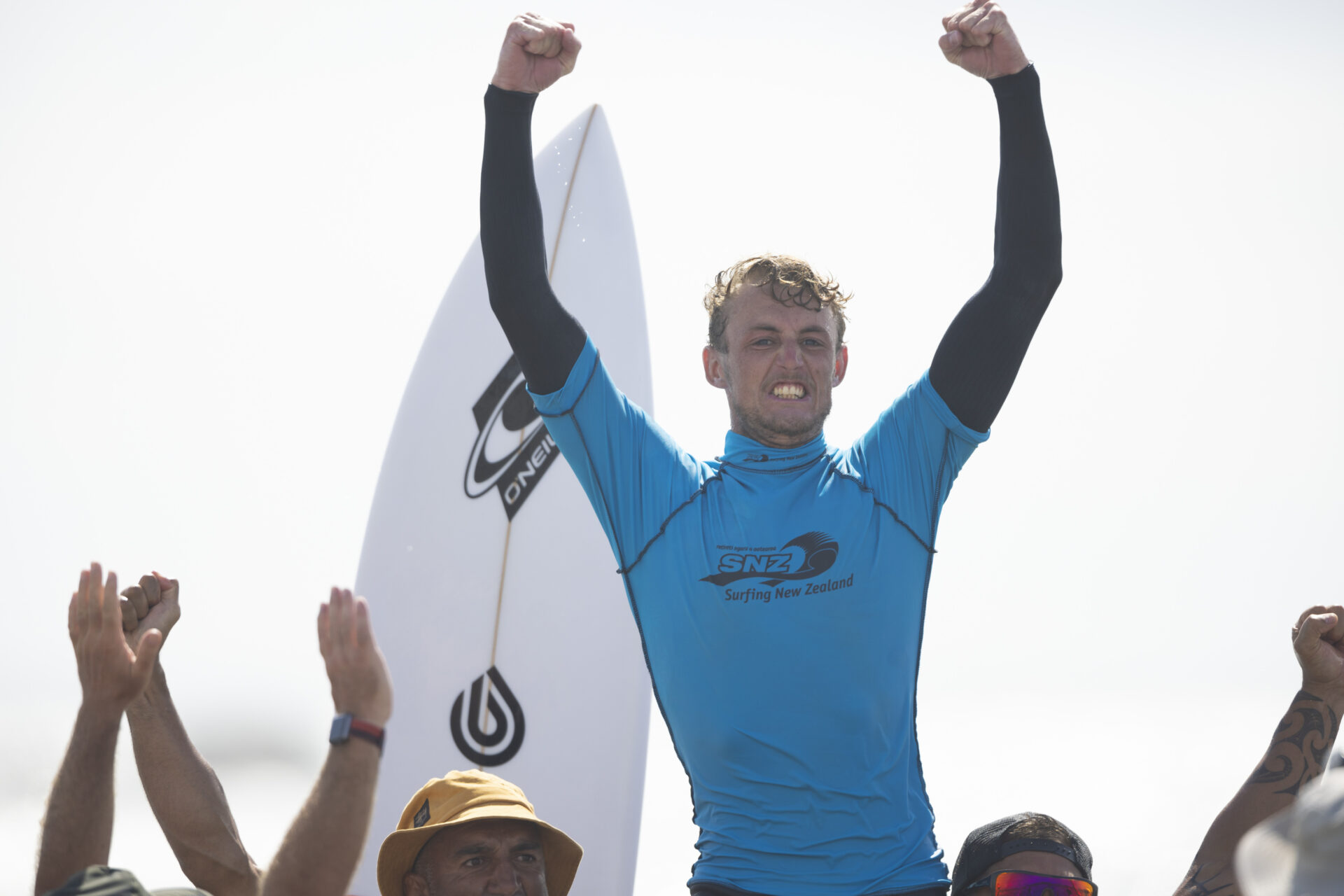 Taranaki surfers Paige Hareb and Daniel Farr both claimed their first titles in the premier Open Women’s and Men’s Divisions at the 2022 National Surfing Championships completed at Nine Mile Beach on Saturday.

The final showdown of the five-day event was relocated to Nine Mile Beach where participants were met with clean 1.0m swells all day and light variable winds. Conditions provided an excellent platform for the 29 finals that were contested at the event.

Twenty-two-year-old Farr surfed to a 16.0 point heat total to claim the victory over Raglan’s Billy Stairmand, Levi Stewart (Waihi Bch) and Reuben Woods (Mnt). Farr found himself trailing a near-unstoppable Stairmand early in the heat after Stairmand surfed out to a 15.33 point heat total early on.

Farr was forced to go to the air on multiple occasions knowing that something special was required to snatch the title.   Farr’s first completed air pocketing him a 7.07 before his second air with under five minutes to go in the final saw him take the lead scoring an 8.93. Stairmand had one last crack to get the 8.01 point ride required for the win, but came up with a 7.33 point ride and the title was Farr’s.

“Oh mate, I am over the moon,” said Farr fighting back the tears. “It is always nerve racking coming here and having a long week and surfing against the best guys in New Zealand. It’s unbelievable really. I am so stoked.”

“When I was behind it changed my game plan a little bit, I have been practicing airs a lot at home and getting my success rate up so I kinda wanted to do that in the final and it’s a final right? You’re up against an Olympian right? So, I had to pull something special out and luckily I landed those two”.

For the closing three minutes of the final, Farr played defence, sitting right next to Stairmand to put the pressure on and make sure he didn’t gift the lead back.

“I am not afraid to go sit right next to him and try get in his head,” Farr admitted. “I am not sure it did anything – he has done this for years, but I would push him onto a dud if I could, or sneak one from under his priority. I wanted to put the pressure on him for sure,” added Farr of the final moments.

Farr was greeted at the water’s edge by a strong contingent of Taranaki surfers as the final results were read out and he was lifted onto the shoulders of his travelling companions.

“We had a lot of finalists today,” Farr concludes. “Paige taking her first title as well. That is bloody good for the region. We are strong, we have a good culture and we were stoked with the finals day and how it unfolded.”

With Stairmand finishing runner up, it was Waihi Beach surfer Levi Stewart in third and quadruple finalist Reuben Woods (Mnt) who finished in fourth place.

It was Farr’s win that helped New Plymouth Surfriders Club emerge from a tight pack of front runners to take overall top club at the event for the first time.

Paige Hareb ticked off her long-standing goal of etching her name on the Open Women’s trophy.

With unrivalled international success, Hareb has often been unable to compete at the National Championships and on the few occasions she has, she has come up short of the desired win … until today.

Hareb looked to be in control of the final from the outset surfing to a 7.17 on her second ride and later backing that up with a 6.43 point ride to finish with a 13.6 point heat total and comfortable victory.

“I am stoked, but it is almost a relief … it was almost becoming a curse,” laughed Hareb of her first title. “I don’t have to do a Nationals ever again now … I mean I will, but not having a title played on my mind every year, so I will probably be more relaxed next year.”

Hareb, the consummate professional, had surfed smart heats all week, doing what was required in often tricky conditions. The finals day was no different as Hareb went about her work strategically.

With the title in the bag, Hareb now embarks on the Regional Qualifying Series in Australia and navigating international travel to secure a World Tour slot for 2023.

“I am home on Monday and then head to Australia mid-February,” she explains. “I have already had one flight cancelled, but I am looking forward to getting over there and starting off my international campaign.”

Ava Henderson (Chch) finished the final in second place scoring 12.0 points and left needing a 7.48 point ride for victory to add to her Under 18 Girls Division title. Raglan’s Brie Bennett finished in third place, her best result at the National Championships, and double finalists and Under 16 Girls’ Champion, Pia Rogers (WGM) finished fourth in her first appearance at this level.

Henderson was joined by Waikuku Beach surfer Rakiatea Tau as the two Under 18 Division champions. Tau, a double finalist, claiming his first ever national title. Henderson has previously won the U14s, U16, 2 x Under 18 and an Open Women’s title, making this her sixth national title.

Rogers was joined by Sumner Beach surfer Jack Tyro as the Under 16 Division champion. Both surfers claimed the titles in the dying stages of their respective finals, Rogers, on her last wave with seconds to go on the clock when she belted a big backhand closeout turn for a 5.93 point ride and the win.

Under 14 Division titles went to Alexis Owen (Dun) in the Boys, his second after winning in 2020 at home in Dunedin, and form surfer of the division Poppy Entwisle (Chch).

Gabi Paul (Piha) defended her title in the Women’s Longboard, her fourth straight in the division.

Reuben Woods was awarded the Peter Byers Most Outstanding Performance award for the event. Woods surfed in four divisions at the event and finalled in all of them. He surfed four heats a day for the final three days of the event and together with his whole family, epitomised what a National Championships week is all about.

The Volkswagen x Skinnies Wave of the Day went to Daniel Farr for his winning wave in the Open Men’s Division Final.

More than 320 entries were received for the event with a total of 29 divisions contested including the premier Open Men and Women, plus additional divisions comprising of age groups from Under 14 boys and girls through to Over 60s for males and females and Longboard, Stand Up Paddleboard, Bodyboard and Kneeboard disciplines.