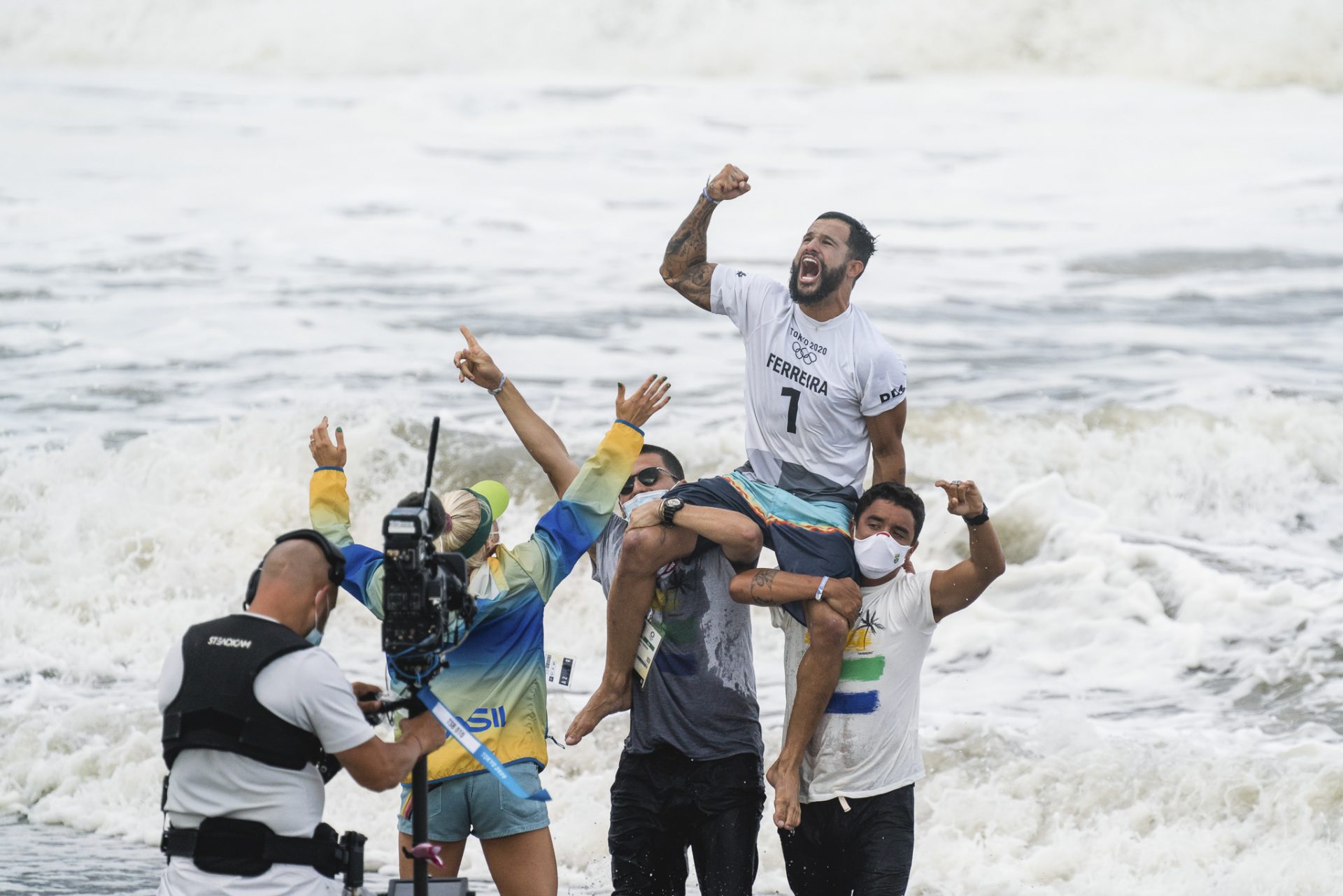 With charm and flair Brazil’s Italo Ferreira and Hawaii’s Carissa Moore, stood up on the biggest stage in sport and produced a masterclass in surfing. Tokyo 2020 has etched a new chapter in surfing. The sport’s inclusion in the Olympics has been impressive and few could argue that two of the world’s best surfers, both current World Champions, have arrived at the top step of the podium.

Their win makes them the first-ever Olympic gold medalist surfers with campaigns that weaved an incredible trail through knee-high sloppy waves at Tsurigasaki Beach to the wild, brown, churned-up maze of typhoon swell that greeted them for the finals. Both these athletes arrived at their gold medals through professionalism, hard graft and complete self-belief.

Ferreira has become the people’s champion – raised from very meager beginnings, he’s drawn from that journey and grown into a giant in the surfing world – loved by fellow competitors and fans alike. The emotion he brings to his gold medal win at the Olympics is testament to the sacrifices he has made and the true grit of his character. Every heat, right into his final, he gave it his all – often comboing his lesser competition – even local favourite, Kanoa Igarashi, in the final. But that shouldn’t serve to embarrass Igarashi – rather he met a man who had his hands halfway clawed around a dream.

For Moore, it is a similar story. Her wholehearted approach to surfing, her generosity of spirit and community leadership makes her a fitting Olympic champion. Like Ferreira’s final, Moore never gave Bianca Buitendag a chance to latch on to hope. Moore won the cryptic puzzle that was the Tsurigasaki Beach line-up finding two 7-point rides that eclipsed Buitendag’s 5 and 3.

Along the way two standouts emerged from the women’s competition with local girl Amuro Tsuzuki and USA’s Caroline Marks facing off in the fight for the last step of the podium. In the end it would be Tsuzuki who would find the waves to secure bronze, but Marks’ early heats showed a fierce determination beyond her 19 years.

For our Kiwi athletes, Billy Stairmand and Ella Williams, the medal run would end in the first man-on-man heat of the Round of 16. Williams came up against Costa Rica’s Brisa Hennessy who has enviably been spending her pandemic days on Namotu Island in Fiji. While Tsurigasaki looked nothing like Wilkes, Namotu Lefts or Swimming Pools, Hennessy was quick to apply the pressure to Williams who was unable to find an appropriate response. Williams had shown flashes of desire in her Round 1 match-up, but left a little off the pace of the hard-charging Marks, who appeared to be in a league of her own early on in the event.

Stairmand was given another David and Goliath situation drawing the form surfer of the early round in Italo Ferreira. It was of similar intensity to his 2011 head-to-head with Kelly Slater at the Drug Aware Pro in Margaret River, Western Australia. Then, at just 21, he beat the then 10-time World Champion 16.50 to 15.50.

But that scenario was not to play out at Tsurigasaki – Ferreira wasn’t having a bar of it – instead forcing Stairmand to reach deep into his bag of aerial wizardry. Stairmand did exactly that but was not able to stick the landings of some seriously giant airs to surpass the raging Brazilian. To Stairmand’s credit, he never gave up and surfed to his full potential and beyond at times during the heat. In the end Ferreira was never going to let Stairmand ruin his run to gold.

Overall the New Zealand surfers can hold their heads high and use this historic Olympic occasion as a learning experience. There are a lot of shortfalls and there is a lot of space between the medalists and our surfers, but that picture is a whole lot crisper now. Let’s hope the high performance sports tools that have been clearly lacking in New Zealand surfing, now have more relevance and urgency, not only for Stairmand and Williams, but our future Olympians for years to come.