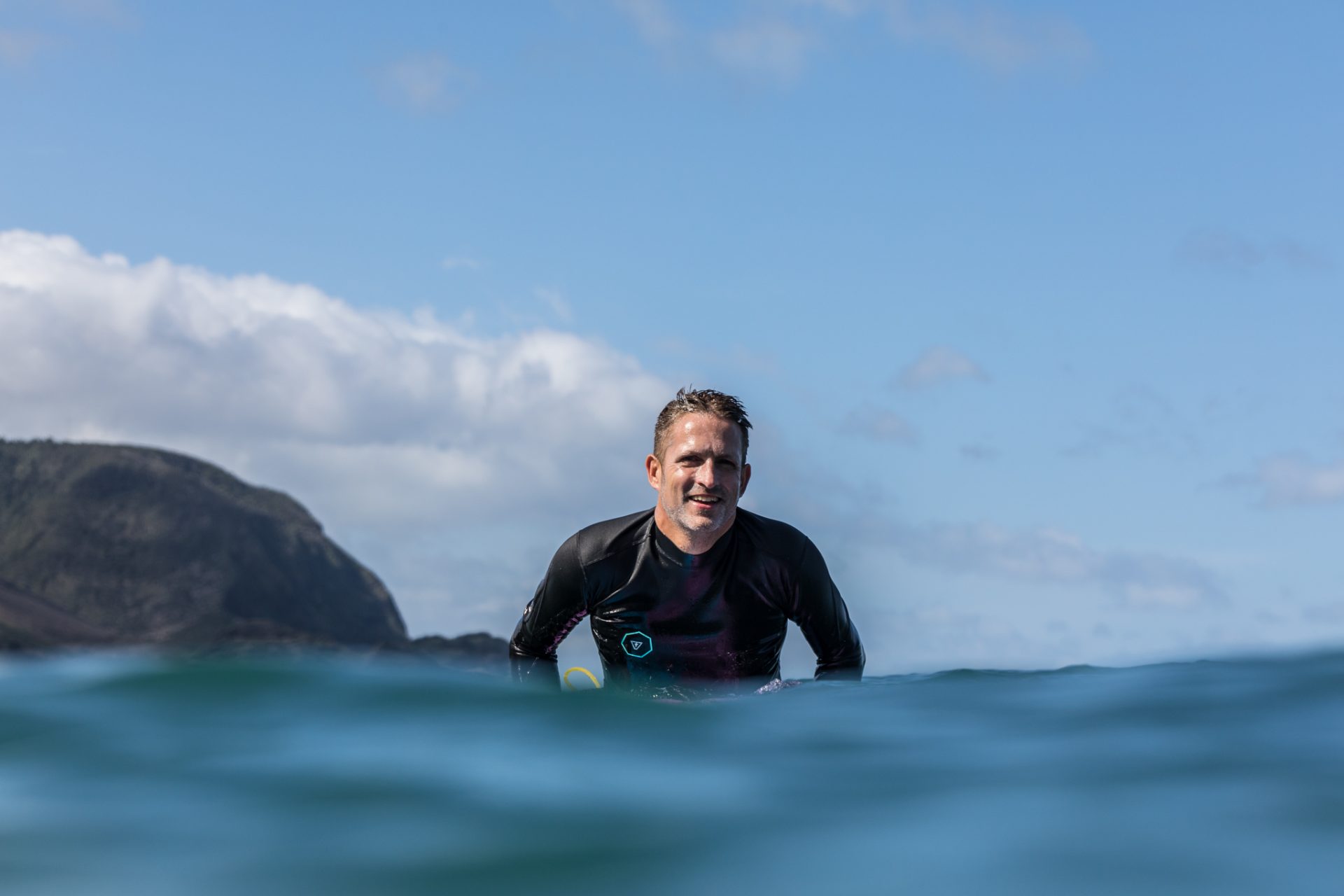 You may not have heard of artist Greg Straight, but chances are you’ve seen his work. His art is prolific and right now he’s completely on trend. He, and his wife Hannah, have landed his art into galleries throughout the country. And he’s in demand for commercial illustrations. Craig Levers caught up with Greg to complete some unfinished business. At Piha, Mr Straight can still bang it. Photo: CPL

Let’s go back to the start and tell us about your first foray in creating something surf related. What was the idea with Octi and when did you start that?

Octi was a clothing line I started in 1994 once I’d completed my Bachelor in Fine Arts. It was a streetwear label and at its peak sold in 12 stores nationwide. I was so green with the business side of things it was never going to be financial. After a couple of years I decided to pull the pin.

I wanted Octi to be 100 percent New Zealand made. I was to discover it is near impossible when you take into account how much things cost to make here in New Zealand. I did learn a lot from the whole Octi experience and it saved me from working for the man for a few years – I recall I surfed a lot back then.

I think this is how I first met you CP. If I remember rightly we had organised an Octi surf shoot at Piha on a Saturday morning with Jake “The Snake” Hogan and Paul “PH” Wynter. The swell jumped up and the wind swung so it never happened.

Author’s Note: I didn’t remember that part of it at all! I recall us having a great evening of BBQ and beers. Then Team Octi crashing on my lounge floor for the night – fun times! 25 years later, we finally do the surfing shoot. Photo: CPL

How long were you in the UK and what were you doing there?

I lived in London for six years and worked as a graphic designer for mostly fashion brands. It was full time and then freelance. It was pretty cool working on accounts like Bench, Dr. Martens, Duffer and Fenchurch.

When I arrived I got made redundant twice in the first two years. After the first time I took the redundancy pay and bought my first computer; an iMac. I used it every day and brushed up on my design skills. It was one of the best things I ever did – that was back in 2002.

Design-wise I was creating a lot of T-shirt graphics and repeat prints for clothing. I have always loved T-shirts from ’80s skateboarding tees to punk rock tees. Creating graphics for forward thinking and creative brands was a bit of a dream come true.

I also met my wife Hannah there in 2000 while she was working at a design company. She went onto having some pretty cool jobs working for a couple of West London’s top nightclubs. And later she worked for an independent record label called Barely Breaking Even (BBE).

London is definitely a crazy, but very awesome place. I still miss those days. Moving back to New Zealand did you have a clear idea of what you wanted to do work-wise? Was there a concern you were moving from a big pool to a smaller market?

Towards the end of our time in England I started surfing more (doing regular trips down to Devon). I had started really missing New Zealand and my family, so we decided to have a two-year trial back in Aotearoa. If that didn’t work out we were planning on heading back.

I continued freelancing for some UK companies, but as time went by the distance made it difficult. I did a bunch of tees for Huffer, RPM and the odd one for Federation. But was soon to realise being a T-shirt guy was limiting and underpaid.

We got married during that first year of being in New Zealand and discovered five days before the big day we were expecting our first. We had to buy a house and grow up real fast!

Then Hannah saw an ad for a full-time position with a supplier for a graphics guy. The pay was a lot less than I was getting in the UK and the work was way less creative. But with a mortgage and now family to support I took it and stayed there for seven years. The Papamoa daze – Greg with his first proper board, a Bob Davie shaped twin … and a rocking Piping Hot overlocked steamer! Photo: Supplied

There’s a lot of beach and surf references and orientation to your work. Are you always trying to sneak a cheeky reference in?

I’ve always loved and been fascinated by the ocean. I started surfing when I was 11 and I was hooked. I became totally obsessed.

My aunty and uncle used to live at Papamoa. Every school holiday we would go down there and I’d surf as much as I could. I have so many fond memories of this time and I try to tap into some of this nostalgia with my artwork. You know, the weathered bach, beaten-up longboard, the Kombi parked on the lawn.

But not all my prints feature the beach or have surf references. I recently created some South Island inspired prints just to mix up all the summer-heavy imagery.

The Piha print was one of five artworks I created for retail store Texan Art Schools, looking at different iconic Auckland locations. Piha had to have a couple of retro ’80s surfboards in it and have the Bar breaking – how could it not?

I remember one time we went out there when I was about 13, the road was gravel back then and my mum made us all chicken soup. We took my mate Jeremy with us and on one of the sharp corners he lost his shit and hurled chicken soup. It went all over Dad’s station wagon splattering our legs with regurgitated Watties. Needless to say, we never asked him along again. Greg at work in the studio. Photo: CPL

It’s a real juggle, bro! Life is super busy and weekends are full on with kids activities and general house chores. I tend to surf during the week.

About four years ago I used to work every night after my day job, to about midnight and worked a lot of weekends. That’s definitely not a good work/family/surf balance. But it was the only way to transition from a full-time job that was soul destroying (creatively), to being self-employed and following my dream.

I’m now surfing more than I have in 17 years. Saying that it’s only once or twice a week, but I’m happy with that. I don’t have a boss (except the wife). I spend more time with my kids, which I love. I get to work on some pretty cool projects with generally awesome clients.

So the answer to your question is the balance right now is pretty damn good!

Great to hear Greg and keep up the great work. Greg and Hannah are hosting a group show November 23rd at the Sustainable Coastlines Flagship, which is in the Wynyard Quarter, downtown Auckland. You’re invited:

Check out the Facebook invite for more details here.