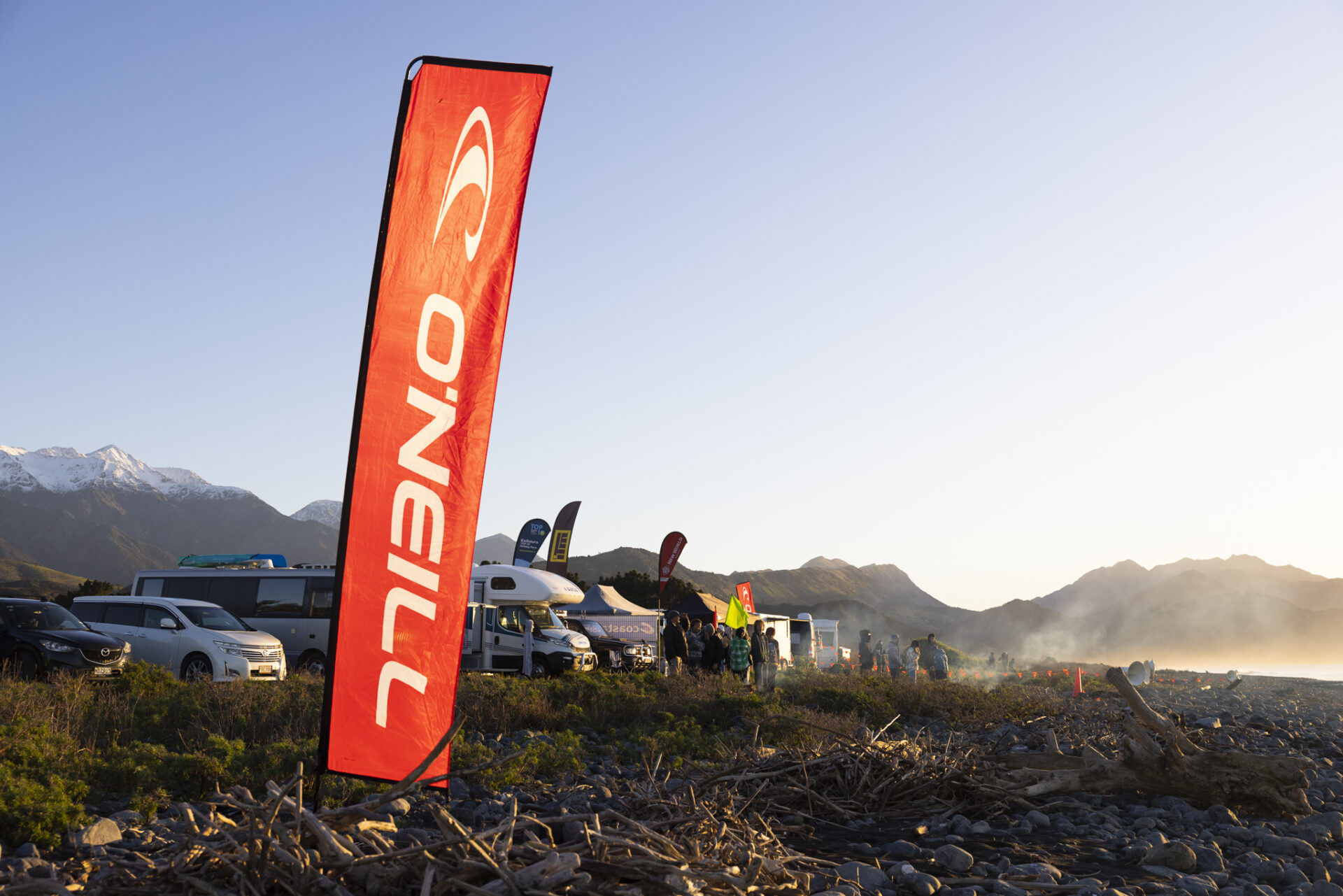 The O’Neill Coldwater Classic surf contest was held on the Friday and Saturday of Queen’s Birthday weekend with Levi O’Connor and Poppy Entwisle taking out the premiere open divisions.

Waves of cold southwest rain accompanying small one metre waves off the Mangamaunu urupa on the Friday, building to sloppy two metre waves for the second day of surfing on the Saturday.

O’Connor also came second in the LMC Building & Construction Senior Men, with Piha’s Ryan Hawker linking up a powerful backhand top-turn followed by a backside air-reverse in the final, which was the highest scoring wave of the contest, putting him in the lead by 7.94.

There were very few high scoring waves in the contest, with inconsistent and small surf at the urupa on Friday. Some competitors surfed right onto the beach to milk the wave to the very end. The Saturday at Meatworks was arguably even less contestable, with solid, but often fat waves in the morning starting off clean and highly contestable, becoming onshore by mid-morning. By noon waves were breaking further offshore and the onshore wind caused a side-chop to cut across the face.

Seth Piercey made it into the Pacific Pools/McCrory Plumbing Men’s Longboard final after an interference with Jackson Baxter in the semi. After spending half the final swimming around with a snapped board, he still managed to come third to Drew Dunfoy from KBR in second, with Charlie Wise from the Point Surf Team taking it out.

“I was just telling the boys what a good deal I got on the board off Trade Me,” Piercey explained after the final. “I was paddling back out and had a big ugly chunk off white water break over me, coming up with two halves. Then Drew yelled out, ‘at least you got a good deal, aye bro’.”

The following heat was the Spray Marks over 45 Men, with Aaron Surgenor and Al Te Moananui facing off along with James Washer from Greymouth and George Roberts Snr from Point Surf Team.

Te Moananui still managed to place second, even though he too snapped his board. “It was one of those weird oncoming sections. I went up to hit the lip as it closed out. I came up after and my board was in two,” said Te Moananui.

The carnage didn’t end there, with Sumner’s Cameron Haylock attempting to ride his longboard with no legrope – which is a common, but questionable practise in Sumner. He was punished for his efforts after waiting patiently for a decent wave. Eventually he caught a good wave, trying hard to pull off holding his board, only for it to be swept away and carried to shore, launching into the air and smashing into the beach to end the heat.

With the carnage also came the usual interference calls and drop-ins, including one frustrated South Coast competitor dropping in on a fellow competitor after they snaked him to claim priority multiple times, only for the South Coaster to drop in and do an aggressive cutback right at him, knocking him off the wave and having an interference call made against him.

Liz Franciolli faced off against her friend and fellow KBR surfer Toshi Davidson in the ITM Kaikoura Women Longboarding semi-final only to have an interference call made against her.

“I burnt Toshi on accident, but we had a cuddle by the fire after, let bygones be bygones,” laughed Franciolli, who came third, with Lucy Te Moananui close behind in fourth.

Haley Baxter played a by-the-book round of contest surfing through to the O’Neill Women’s Open final, placing third, along with Lucy Te Moananui who placed second in the Emporium Brewing over 30 senior Women’s.

Sonny Lyons made it to the semi-final of the Coastal Sports Under 18 Boys, with very few waves on offer throughout heats in both the under 18 and in the Jade Kiwi Under 16 Boys, where Sonny came third to Lincoln Penei from North Wai with Alexis Owen from South Coast taking it out. Owen was a stand-out throughout.

The contest was wrapped up in two days, with the prize giving held at the Strawberry Tree continuing into the wee hours for some. The tunes of the Hippy Pickers being the highlight for many.

This brings the SISA South Island surfing circuit to a close for another season, for which KBR would like to thank our local community and sponsors for coming out to support this event once again. We’d also like to thank all the competitors, officials and support crews who made the effort despite the rough forecast. Everyone made the most of the conditions, while bringing all the good vibes, banter and camaraderie that our South Island surfing circuit is renowned for.