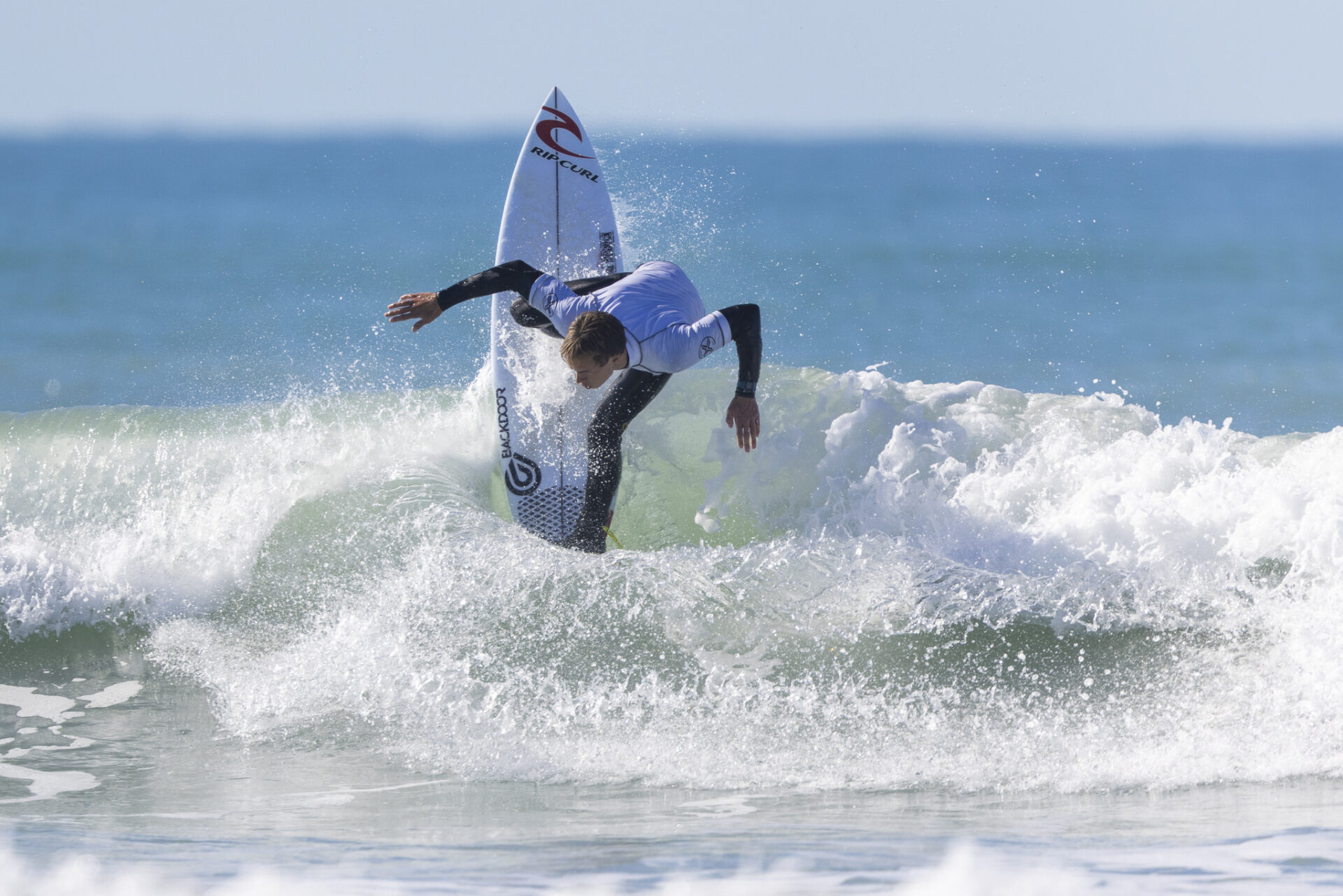 Over three days at the end of April surfers across Canterbury battled it out for Exit Surf Men’s Canterbury Surfing Championship titles. With Daniel Farr, Caleb Cutmore, Taylor Hutchison, Kalani Louis and more North Island surfers joining the fray on the heels of the South Island Champs, the stage was set for a very exciting showdown.

Thankfully the surf played ball with a small 1-3 foot swell running throughout the comp and organisers savvy enough to run heats through the mornings only to take advantage of the mostly offshore winds at North Wai.

Once again it was Alexis Owen who looked to be in a league of his own in the Under 14s, winning through to a dominant finish in the final to better Sonny Lyons in second, Tai McKenzie in third and Keo Morrison in fourth.

Alexis backed it up again in the Under 16s taking down form surfer in the division Rakiatea Tau to nudge ahead for the win. Third and fourth went to Jack Higgins and Lincoln Penei on this occasion.

The double win pushes Alexis to a perfect 5000-points in the Under 14s and elevates him to third in the Under 16s in the National Grom Series rankings.

In the Under 18s Taranaki rising star Kalani Louis proved his South Island Champs win was no fluke, digging deep in a supreme final battle in which he bettered second-placed local ripper Jai Oakley, Rakiatea Tau and Jake Owen. That win puts Kalani into a clear lead on the Under 18 national ranking table with two more events to play, including one in his backyard.

The Under 18s wasn’t without its share of controversy with Kaikoura’s rising star Tyler Perry copping a priority interference in his quarterfinal that effectively ended his campaign. He lost his second score completely as a penalty. The incident highlighted the confusion over priority and the need for education around the various nuances of it for surfers. From the outside it certainly seems to be broken when one of the best surfers isn’t advancing for a relatively minor mistake. Perhaps the penalty is too severe? I’m sure it will be discussed around the Surfing New Zealand round table.

The Open Men’s showdown was always going to feature a heavy North Island contingent with the defending champion Taylor Hutchison and National Champ Daniel Farr shaking up the field. But that turned on its head when local charger Myka Black sent Taylor Hutchison packing from the semi-final. Hutch was just unable to buy a wave as the ocean lulled out in his heat.

That set-up a showdown between North Islanders Caleb Cutmore and Daniel Farr and South Islanders Myka Black and Tyler Perry. A light onshore shift hinted at an air game, but the offshore prevailed for the final as the swell started to falter.

The final was about as exciting as you can get as first Caleb and then Daniel found 6s. You could feel the intensity ratchet up between the two while the battle with Myka and Tyler was trailing behind as they struggled to better 4s and 5s in the lacklustre conditions.

Then Daniel pulled the trigger on a clean air reverse to take control of the final. Caleb was behind and needed a 6.13. The horizon offered no hope. The clock was counting down. Caleb swung and paddled for a not overly promising wave in the dying moments. Maybe it had the potential, if it was surfed perfectly, to harbour a 6.8. Caleb didn’t waste a single drop of water and went through the lip five, six, maybe seven times as he belted it like he was on rails. He walked up the beach and everyone knew it had been an exceptional wave. But had it been enough?

The judges thought so. Caleb landed a 6.63 that handed him his first ever senior title. It was an incredible moment for a junior surfer who had been so dominant to finally crack the seniors in a heat against a completely in-form national champion.

What I liked most of all was the bits in between where Caleb, Daniel and Taylor would help out the young grommets and share their wisdom. That’s pretty special to see and speaks volumes for the characters we have in surfing and the future generations to come.

The longboard division saw another north vs south battle with Zen Wallis and Hugh Ritchie going head-to-head. This time the Southerner won the title with Zen in second, Charlie Wise in third and Jared Crawford in fourth.

The Over 30s was won by Ryan Hawker with local ripper Mike Oakley (yes, Jai’s dad) in second. Mike made short work of the Over 45s with a 3.13 gap to second.

Huge thanks to Exit Surf, Smoothstar, Ocean and Earth, North Wai locals and all the contest team and judges for putting on such a fun event.