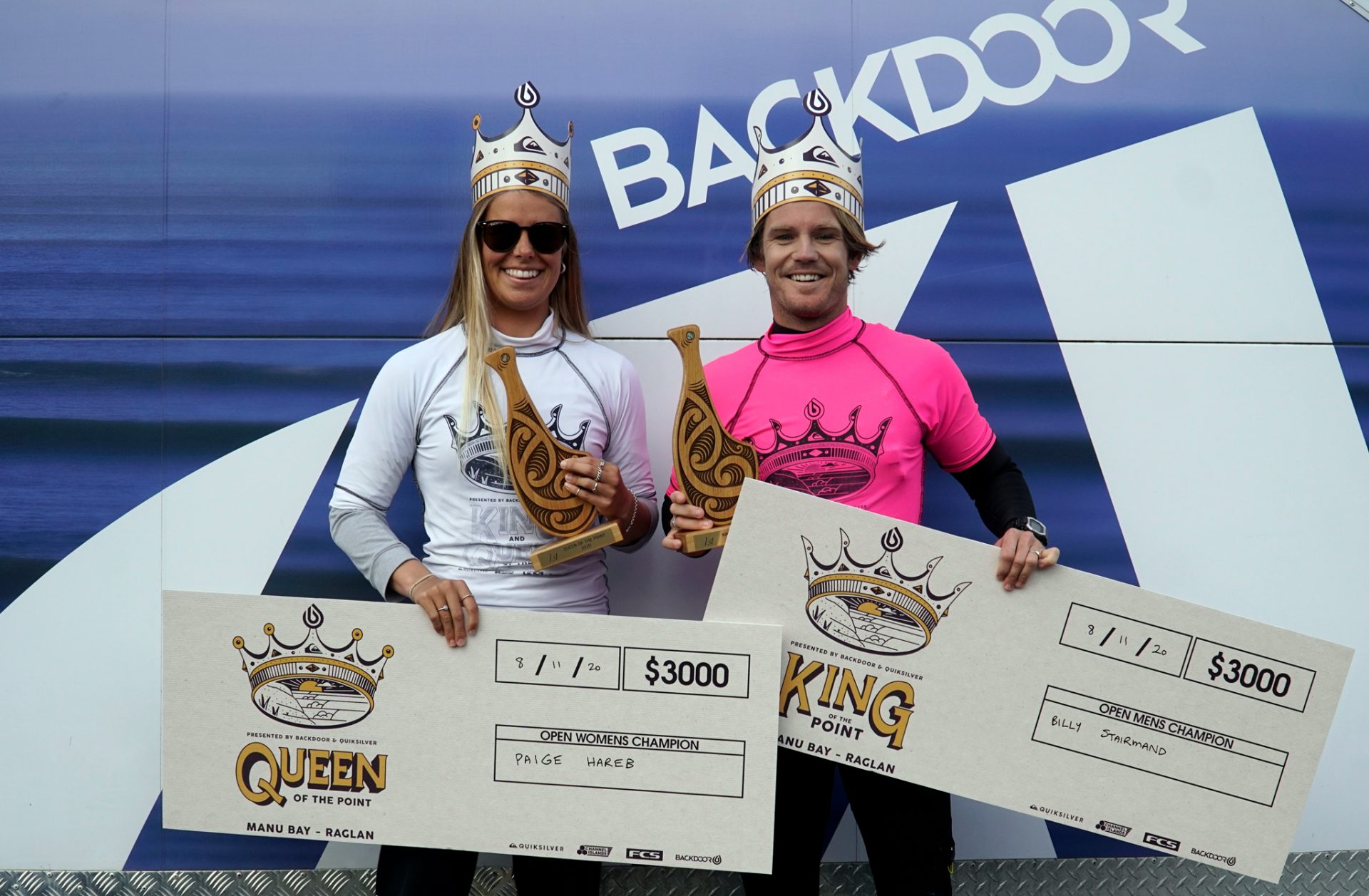 Local Raglan surfer Billy Stairmand was too good for his opponents this weekend being crowned King of the Point alongside New Zealand’s most successful surfer Paige Hareb, of Taranaki, who was crowned Queen of the Point in the Women’s Division.

The King and Queen of the Point, which is presented by Backdoor and Quiksilver, is the final national event of 2020, concluding the shortened New Zealand Surf Series for 2020. It was contested at Raglan’s Manu Bay over three days from November 6-8, 2020.

Finals day started out with a full storm and northwest winds before the wind swung more to the southwest and cleaned up the 1.5m waves along with the help of an afternoon full tide for the finals.

Stairmand looked in control of the final from start to finish ending up with a 16.0 point heat total out of a possible 20.

“It’s a hard one. I have grown up here all my life. I know the wave inside and out, but I try to class myself as the underdog,” Stairmand said about his win and favourite tag this weekend. “I like everyone talking about Cederman (Luke) and Ricardo (Christie) or Kehu (Butler) and me just coming through the ranks and doing my thing. So it is good to get a win and a bit of money for the summer.”

Stairmand’s performance was highlighted by an 8.33 point ride on his last wave, the highest of the final.

“There were a few wide ones earlier that I had seen and that one was too wide for the others and it was good to open up on a big wave and do some good turns”.

With the win, Stairmand takes out the truncated New Zealand Surf Series for 2020, his fourth consecutive title.

“It is good to finish off with the series win after the Nationals, then Covid, then I tore my MCL and then only this comp,” he admits. “To finish with a win at home is good – I can’t wait for next year. My plan is to train hard out for the Olympics – that’s my top goal at the moment. I’ll head into the Nationals at Piha in January then see what comes after that.”

Finishing runner up in the final was another local in Taylor Hutchison. Hutchison finished with a 13.4 point heat total after running through a strong field of surfers on the finals day. Dune Kennings (Piha) pushed Hutchison for the runner-up position throughout the final, but had to settle for third ahead of Shane Kraus (Piha) in fourth. Kraus was the dark horse of the event advancing through to the final after taking down top surfers including Kehu Butler (Mnt) and Ricardo Christie (Gis) over the weekend.

Paige Hareb showed her experience to dominate the final of the Open Women’s Division and become the Queen of the Point. After playing catch up early on, Hareb notched up a pair of seven point rides for a 14.84 point heat total and what looked like a comfortable win.

“I wouldn’t have been happy with anything less than winning this weekend so I am pretty happy with how it turned out,” admitted Hareb afterward.

“It took a little while to find my feet to be honest. The first two heats I used a different board and I wasn’t happy with my surfing – it didn’t feel right. So I changed boards for the final and risked it and it paid off,” added Hareb.

Despite comfortably being in the lead, Hareb drew on her international experience to protect the win in the latter stages of the final.

“I don’t like protecting my lead that much, but all the girls were surfing really well and one bomb wave could come through and changed things,” she reveals. “I didn’t want to risk it, so I used my experience and did what I had to do.”

Like Stairmand, Hareb has spent a lot of time in New Zealand this year, but her sights are firmly on a return to international competition in 2021.

“Looks like I will be home for a while at this stage, but I have my fingers crossed I can get overseas at some stage next year and compete internationally. For now I will just go with the flow though, home is pretty good.”

Triple finalist Ava Henderson, of Christchurch, appeared to run out of steam in her fourth appearance of the day, but a 5.93 ride on her last wave was enough to see her into second place and round out a fantastic weekend of surfing for the rapidly rising star.

Olympic provisional qualifier, Ella Williams, started out strong in the final securing an early lead before holding priority for much of the rest of the 25 minutes. However, she was unable to find a good back-up score and she finished in third place overall. Double finalist Aimee Brown (Grt Barrier) finished in fourth place.

Kehu Butler stormed out to a massive lead in the Under 20 Final with his first two rides in the first three minutes amassing a 14.3 point total. However, it was local surfer Caleb Cutmore that fought back with a pair of high seven-point rides that saw him take the lead from Butler. It would only be a second bite at the cherry in the final stage of the heat that would seal it for Butler with a massive two-turn combo that netted him an 8.44 point ride and the lead with less than a minute to go. Butler’s win left Cutmore in second with Raglan locals Kora Cooper in third and Josef Jungwirth in fourth.

Kai Woolf led the final of the Under 20 Girls Division from start to finish after posting a 7.17 on the first wave of the final. Woolf finished with a 12.34 point heat total for a comfortable win. Brie Bennett (Rag) fought back late in the heat with a 6.0-point ride, but it was not enough to reach Woolf, Bennett finishing in second ahead of Aimee Brown (Grt Barrier) in third and Ava Henderson (Chch) in fourth.

Finn Vette rode to the win in the Under 16 Boys Division in the final 10 seconds with a 6.5-point ride to jump into the lead and with that, the overall win for the 2020 New Zealand Grom Series. Vette had trailed local surfer Jayden Willoughby all final before his final wave pushing Jayden into second. Navryn Malone (Rag) finished in third place ahead of double finalist Kora Cooper (Rag) in fourth.

In her third final, Ava Henderson claimed the Under 16 Girls Division in the final ten seconds with an 8.17 on her last wave pushing Liv Haysom (Auck) into second place after having led the entire final. Natasha Gouldsbury (Tara) finished in third ahead of Sophia Brock (Mnt) in fourth. Henderson had already secured the overall New Zealand Grom Series with her performances leading into the final event of the year.

The King and Queen of the Point boasts $15,000 in prize money as the richest event of the year and with maximum national ranking points on offer.

The King and Queen of the Point is made possible thanks to the generous support from Backdoor Surf Shop, Quiksilver, Channel Island Surfboards and FCS Hardware. The event is hosted by Raglan’s Point Boardriders.

Watch: King and Queen of the Point Gallery

Final results from the King and Queen of the Point presented by Backdoor and Quiksilver
Manu Bay, Raglan, November 6-8, 2020