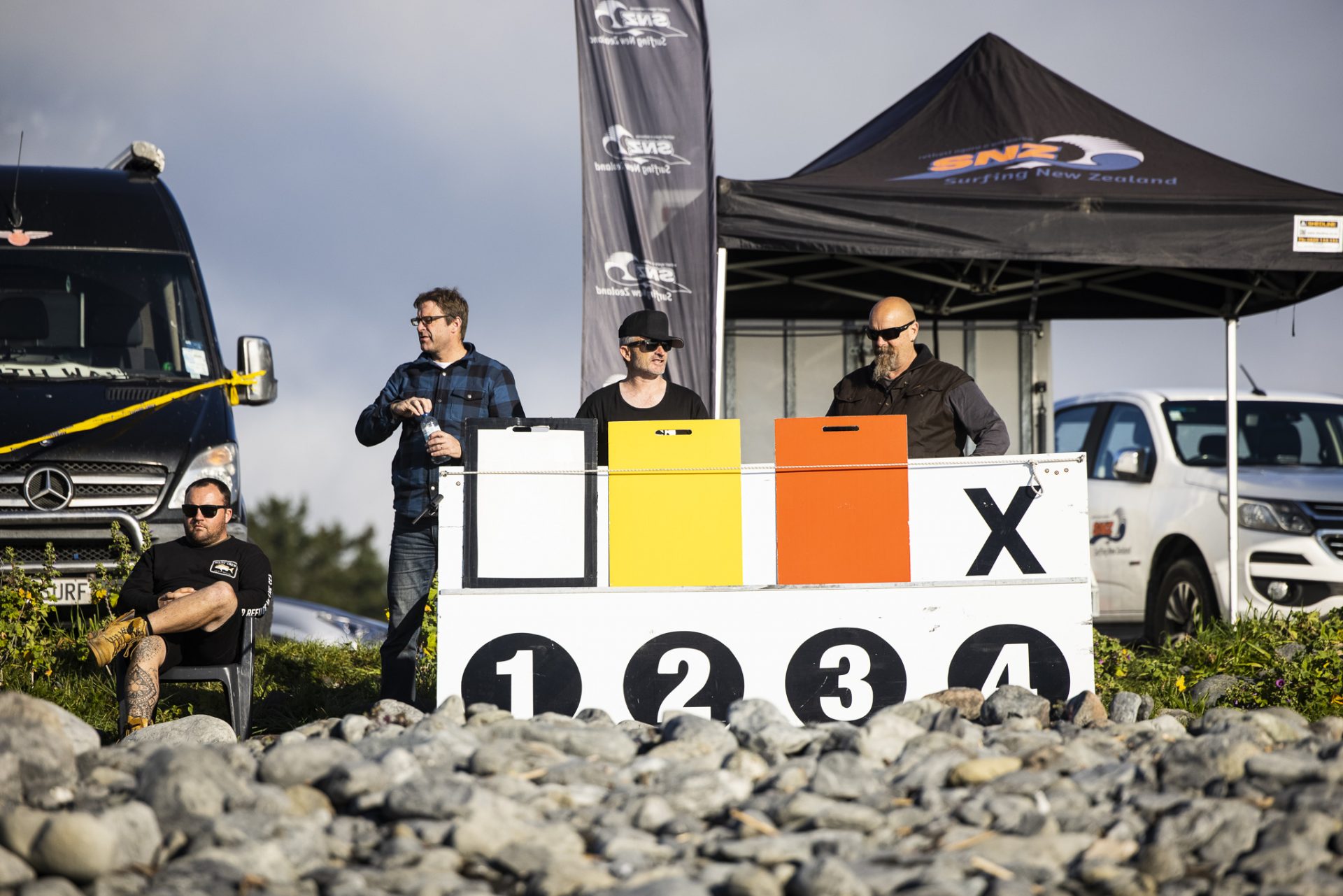 Since Surfing New Zealand implemented priority rules into local contests the quality of heat surfing has improved. But is there a dark side to the way we’re implementing it? Any blunder in priority rulings can effectively stop even the best surfer in their tracks. And that has happened at least twice in big events.

The idea of priority is to give the first surfer out the back the first choice of wave – it eliminates the scramble for the best waves and allows all surfers to perform at a higher level. When it works the surfers love it and we get to witness the best surfing possible.

But at the 2020 New Zealand Surfing Nationals, in Dunedin, Billy Stairmand found himself on the wrong side of a call. Priority relies on an imaginary zone that was fully tested in the Open Men’s Final when Daniel Farr was awarded priority over Billy Stairmand. Billy had taken a look at a wave, but realised it had no potential, pulled off and paddled back into the take-off zone, sitting just off to the right. Daniel paddled back into the zone moments later and was awarded priority. The priority judge, Lee Ryan, had a zone in his head that Billy had not quite entered and so gave Daniel the nod. Billy was visibly rattled.

“It wouldn’t have changed the outcome of that final,” admitted Billy, who finished second to Elliot Paerata-Reid, afterward. “But we do need to get priority right.”

When pressed on the controversial call Surfing New Zealand’s Ben Kennings defended the priority call made by Lee Ryan. World Surf League (WSL) priority judge, Iain Buchanan, upon reviewing the footage, assessed the wrong call had been made in that circumstance. He also noted how difficult it can be to get it right.

Roll on the 2020 New Zealand Scholastics Surfing Championships, held in Kaikoura in October, and the form surfer in the Under 18s is Jack Hinton from Mount Maunganui. Hinton had been the man to beat all event, but found himself the victim of a controversial priority call during his quarterfinal heat.

Thinking he had priority, he took off on a wave that James Millar, of Christchurch, was also looking at. Millar pulled off. Hinton surfed the wave oblivious that the priority had switched moments before when he had paddled to look at another wave. The resulting penalty discounted Hinton’s second score – effectively wiping him out of contention. Millar, himself an event favourite, went through with Sam Charlesworth, of Auckland. Hinton packed his bags.

From the beach, it was difficult to understand how the priority had switched. Hinton’s look at the wave was nothing more sinister than a positioning paddle.

Hinton, 17, said it had been a super fun comp until his quarterfinal priority interference.

“The judges mucked up the priority, which was a bit annoying,” he managed after the heat. “My second score got wiped out – how’s that? Comp over. All the other surfers thought I had priority, even James Millar. He pulled off that wave. When I checked the boards it was showing I had first priority and then I paddled out and saw James looked at a wave so I decided to use my priority and just went straight for it. And then heard them say that I didn’t have priority. So frustrating.”

Immediately after the heat Hinton sought clarification from the judges.

“They reckoned I paddled for the wave before, but I didn’t – I just had a look at it,” Hinton explains. “You have to paddle pretty hard for it to be counted as trying to catch one – I just had a look at it and paddled over the back of the wave. It’s so frustrating – I had felt like I was going pretty good. I’m pretty gutted about it, but they have made the call and I can’t change that.”

Hinton was one of the event’s clear favourites, winning each of his heats in convincing style leading up the the quarterfinal. He pauses for a moment and looks for something positive to take away.

“It’s such a fine line,” he offers. “You just have to learn from your mistakes, carry on with it and I’m happy with my surfing in the event up to that point. I had some new Sharp Eye boards turn up before this event and they are just magical.”

“A priority interference ruling like this just drives me to be a better surfer.”

One thing that is becoming very clear around the use of priority in surf contests in New Zealand is that very few people actually know how the finer elements of it work – even the priority judges it seems.

Surfing New Zealand’s Lee Ryan is responsible for implementing it here in New Zealand. We asked him to shed some light on the paddling rules – specifically around the Jack Hinton incident.

“There is no set rule or number of paddle strokes,” Ryan offers. “It is up to the discretion of the priority judge to make the call as to whether it was a definite attempt to catch the wave, or if it is a look. Generally, if the surfers are digging in and paddling towards the beach as opposed to paddling sideways across the peak then it is obvious they wanted the wave. Kicking your feet is also a giveaway.”

Ryan admitted it was a grey area.

Another issue in the Jack Hinton ruling was that he never saw the change in priority happen.

“Priority changes can happen in a split second so it is up to the surfer to look up at the board to see if they lost priority,” offers Ryan. “It also helps to have the MC watching the water the whole time and announcing when there is a priority change. Remember Medina v Caio Ibelli in Portugal?”

I ask Ryan, if upon review he thinks they made the right call with priority red on blue (Jack Hinton on James Millar) in that Under 18 Boys quarterfinal at the Scholastics.

“Yes, that was the right call,” he asserts. “I wasn’t on priority – I was judging that heat, but was keeping a close eye on the calls as was the head judge Dan Kosoof.”

While Surfing New Zealand stands by the calls of its judges the mistake in the National Open Men’s final with Billy Stairmand and Daniel Farr, and then this one at the Scholastics there seems to be some disconnect.

We ask Ryan if there should be an education component required on the part of the judges? And the surfers themselves?

“Priority is a challenging job and the only way to get better is to do more of it,” Ryan states. “We try to rotate priority with other judges so they can all learn. We are also having a judges’ workshop (led by Ratso on the afternoon before the King of the Point Competition in Raglan this weekend) to upskill our current officials.”

“Surfers also need to learn the rules and stay up to date,” he presses. “The WSL Priority manual is updated regularly and priority is a learning curve for everyone – even the WSL.”

“Mistakes can and will happen as judges are only human,” Ryan admits. “Note the priority judge does not take his eyes off the water for one second during a heat as he or she is watching the paddling and not the surfing. Where a judge only has to watch the surfers rides when they are called ‘up and riding’. WSL and ISA also have the benefit of video replay to analyse close paddle calls.”

And in that last point we see a key component to being able to execute priority well: video replay. The ability to be able to challenge and review a judge’s decision has transformed sports like rugby and tennis. It has made them fairer. Why not in surfing in New Zealand? Jack Hinton may not have been able to win that quarterfinal heat – it was full of top-rated surfers, but the ability to challenge and review that particular priority decision should be possible. The hours of training and costs of competing so far from home are not insignificant when your campaign becomes derailed by a call that, on the face of it, seems fairly flimsy. And incorrect.

As Ryan has stated, there is an onus on judges and athletes to upskill when it comes to priority. Let’s just hope that there is a whole lot of commonsense woven into the education around it from here on in.