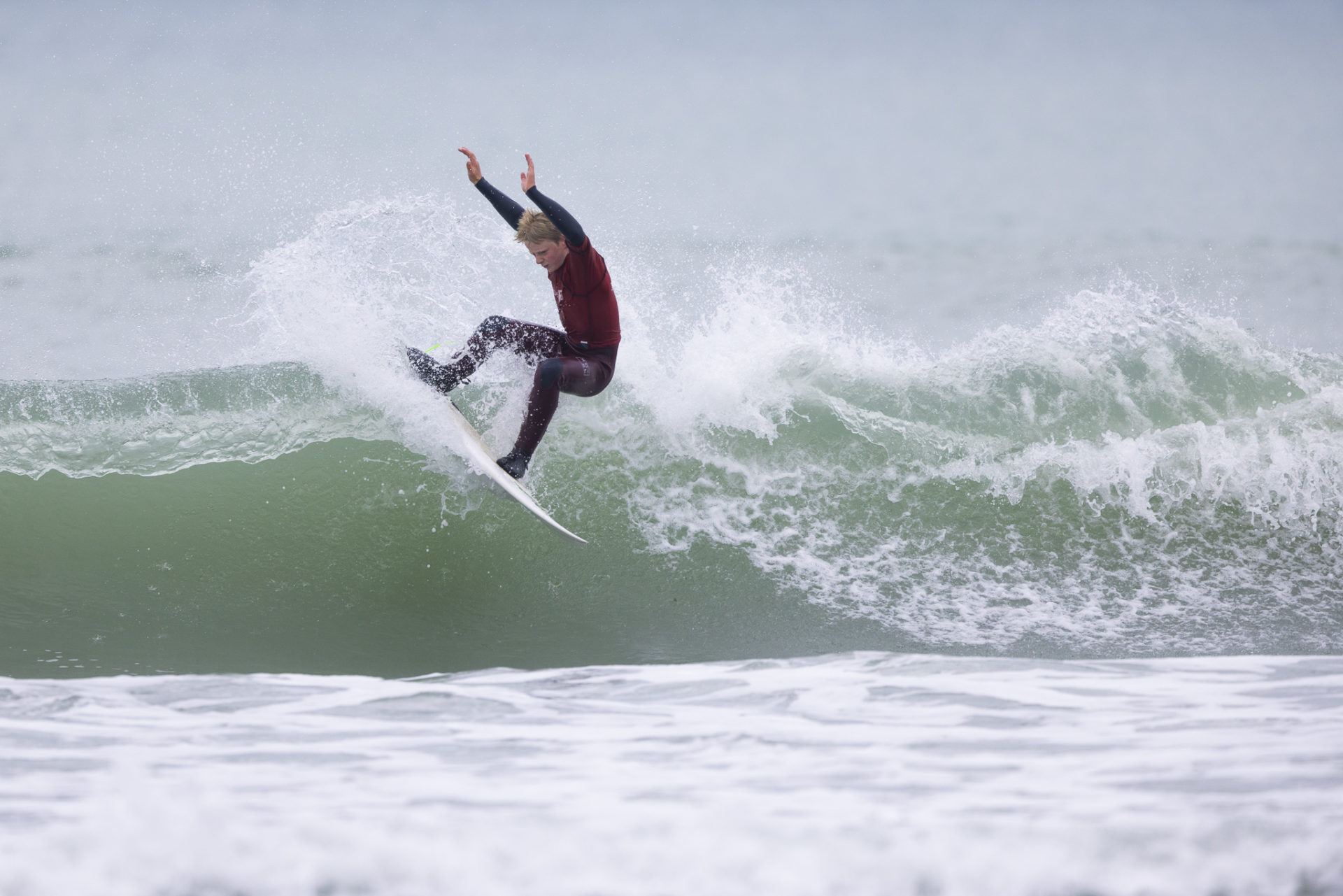 The warm coast of New Brighton delivered waves in the 1-2 foot range for the contest with a mixture of glassy waves and onshore winds for the South Island Primary School Champs.

With Covid raging up north and Under 12s unable to be vaccinated the fields were smaller than usual, but still presented plenty of great battles. This event is one of only a handful of events that have been able to run this year with the New Zealand Primary School Champs, scheduled to be held in Gisborne in December, cancelled last week.

The waves were challenging, but ultimately contestable for the groms. If you asked Lexi Owen … well, he made them look like pumping waves. He’s been out of action for most of last year and earlier in 2021 with injury, but now he’s back and, somehow, he’s even stronger than before. Lexi is now surfing better than he was when he won the Under 14 National Championship back in 2020.

In the Year 7/8 Boys division he was notching up 5s while his competitors struggled to find a 3. His 9.87 heat total put him clear ahead of second-place Kaikoura ripper Sonny Lyons (6.13) in the final. Blenheim’s Dan Lynn finished third with Dunedin’s Keo Morrison in fourth place.

In the Year 7/8 Girls division it was local surfer Poppy Entwisle who laid down her intentions in every single heat with her dominant, ultra-competitive style. She probably wasn’t expecting Dunedin’s Pipiata Ritchie to breakthrough at this event, but Pipiata put everyone on notice when she carefully extracted the best score of the opening round of this division – her 8.13 bettering that of Poppy’s 7.77.

In the dying waves of the final though, Poppy wasn’t about to rollover and dominated from start to finish. Poppy’s 5.90 was enough for the win from Pipiata’s 4.00, Daisy Kay’s 3.77 and Georgie Macefield’s 2.14.

In the Year 6 and Below Boys another surfer raised their hand. Kobe Coleman, of Christchurch, surfed an impeccable opening heat and continued that surge into the finals to win with an 8.80. Local surfer Jacob Seipp took second with 5.20 ahead of Ed Thomas on 2.40 and Dylan Dempsey on 1.40.

Eleven-year-old Pipiata continued her dominance in the Year 6 and Below Girls with a 6.43 total in the final to better local surfers Layla Duke and Riley Somogyvari who struggled to find the high scoring waves in the deteriorating conditions.

Full kudos to the host club North Wai Boardriders who used the event to blood officials into the newly introduced Live Heats software. With Live Heats expert Jimi Higgins overseeing proceedings the event ran flawlessly and the live scores and communications were equal to any WSL World Tour comp. Just superb and, although Hawke’s Bay Boardriders has been using this tech for several years now, this heralds a new era in surf comps in New Zealand with the South Island Surfing Association embracing it and Surfing New Zealand rumoured to be pondering it.

North Wai prides itself on this event and it didn’t disappoint with a pretty epic prize cabinet that included a brand new JS Monsta Box surfboard and Ocean and Earth wetsuit and three $100 notes split among the winners of each category. Pipiata claimed the surfboard and wetsuit, to add to her dreamy day of competition. She couldn’t get the smile off her face.

Lexi won the James Ritchie Memorial Trophy, adding his name to a distinguished list of competitors.

“I’d like to say a big thanks to Modern Strategy, Exit Surf, Hawke Financial, Lewis Joyce, the Sheriffs, North Wai and New Zealand Surf journal for supporting the event,” contest director Russell Ritchie said. “And also to the best event support team in the country.”