We Rank The 10 Best Surfers In…

Ziggy Alberts Shrugs Off The Sleet To…

Super Heat: Inside The 2020 New Zealand…

Vege Power: How One Surfer Owned His… 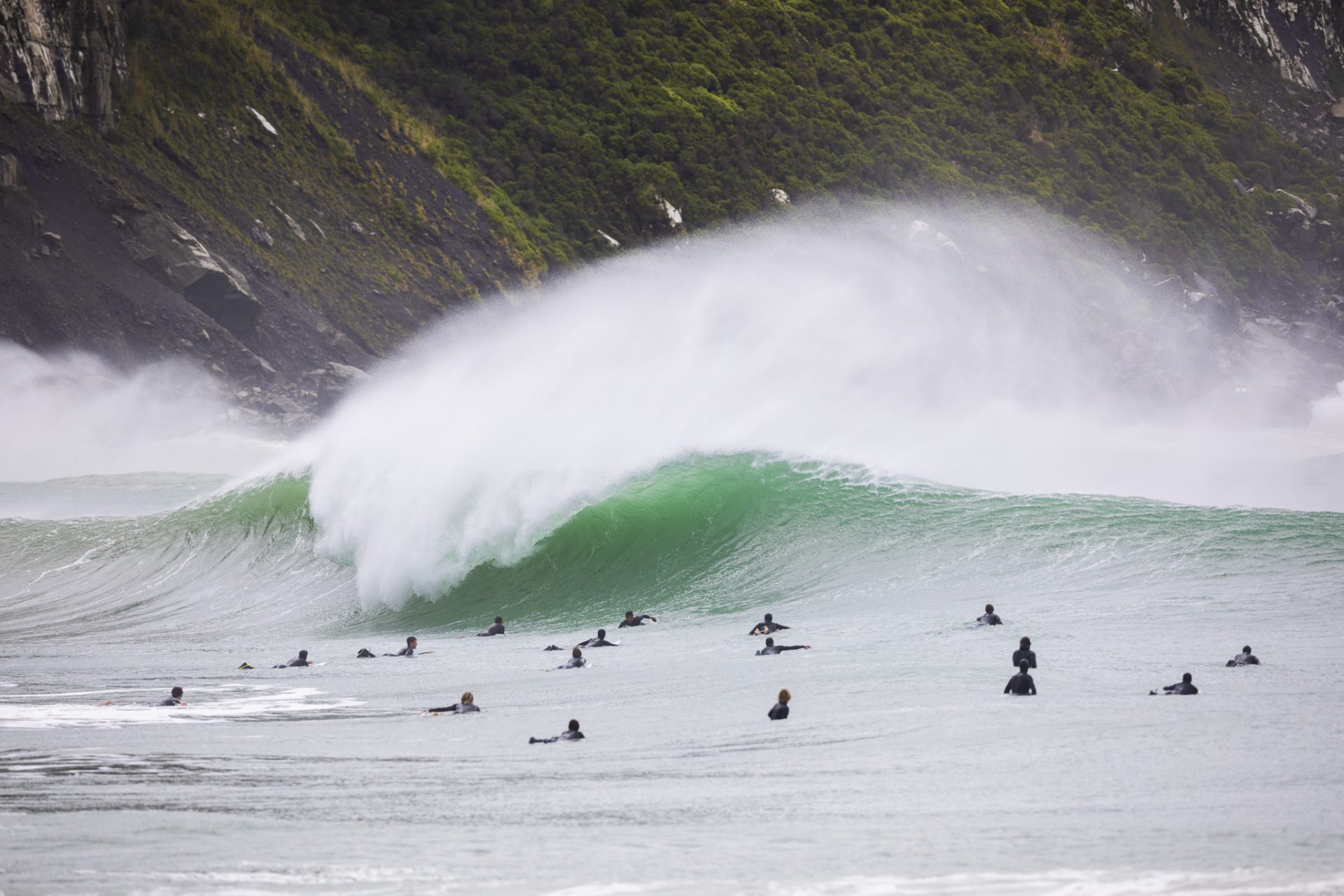 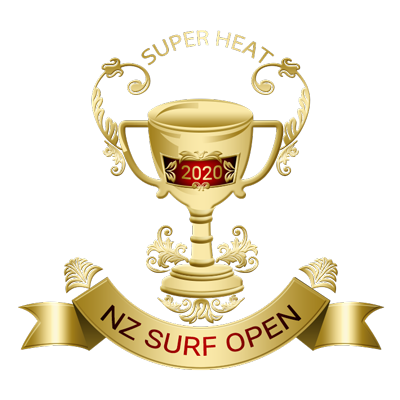 The wheels were set in motion when a gust of wind ripped across the St Clair Esplanade after four heats of the Health 2000 2020 New Zealand Surfing Championships. Contest director Ben Kennings looked at the forecast and pulled the pin immediately. The offshore swell was forecast to jump to 8m thanks to 45km/h southwest winds with 90km/h gusts – nasty stuff. But everyday fodder down in the Catlins.

One remote bay became the focus. Locals thought the swell might be too big and the wind too strong to produce the type of waves we were after. It was a 50-50 call.

Thankfully, the forecasts were wrong. And by 11:30am on Monday, January 6, 2020, the Super Heat began in powerful, offshore waves in the 3-6-foot range.

In attendance were New Zealand’s surf media with photographers Hayden Campbell and Cory Scott and filmmakers Tim Shaw and Damian Phillips documenting the best of the best trade waves in the natural amphitheatre.

Among the surfers we had Olympic hope Billy Stairmand, WQS campaigners Daniel Farr and Elliot Paerata-Reid, chargers Bugsy Malone, Paul Moretti, Dune Kennings, Caleb Cutmore, Finn Vette, Kora Cooper, Aimee Brown, Conor McLennan and a host of others including Jamie Civil who normally surfs this place alone. It’s a star-studded cast and they made the most of it.

Here’s 12 of the standout moments from the Super Heat:

This has to go to Dune Kennings (above) for reading this outside peak wave so well. Smooth as silk and seemingly totally comfortable in the size on offer. He eventually retreated from the session with a broken board – the price to pay for picking off the biggest bombs beneath the cliff face. Impressive. Let’s hope he stays out of the injury bay for 2020 – this lad has a lot to offer.

In a close second for wave of the day we have Billy Stairmand with this drainer and snap into the pocket just another feather in his Super Heat wave collection. 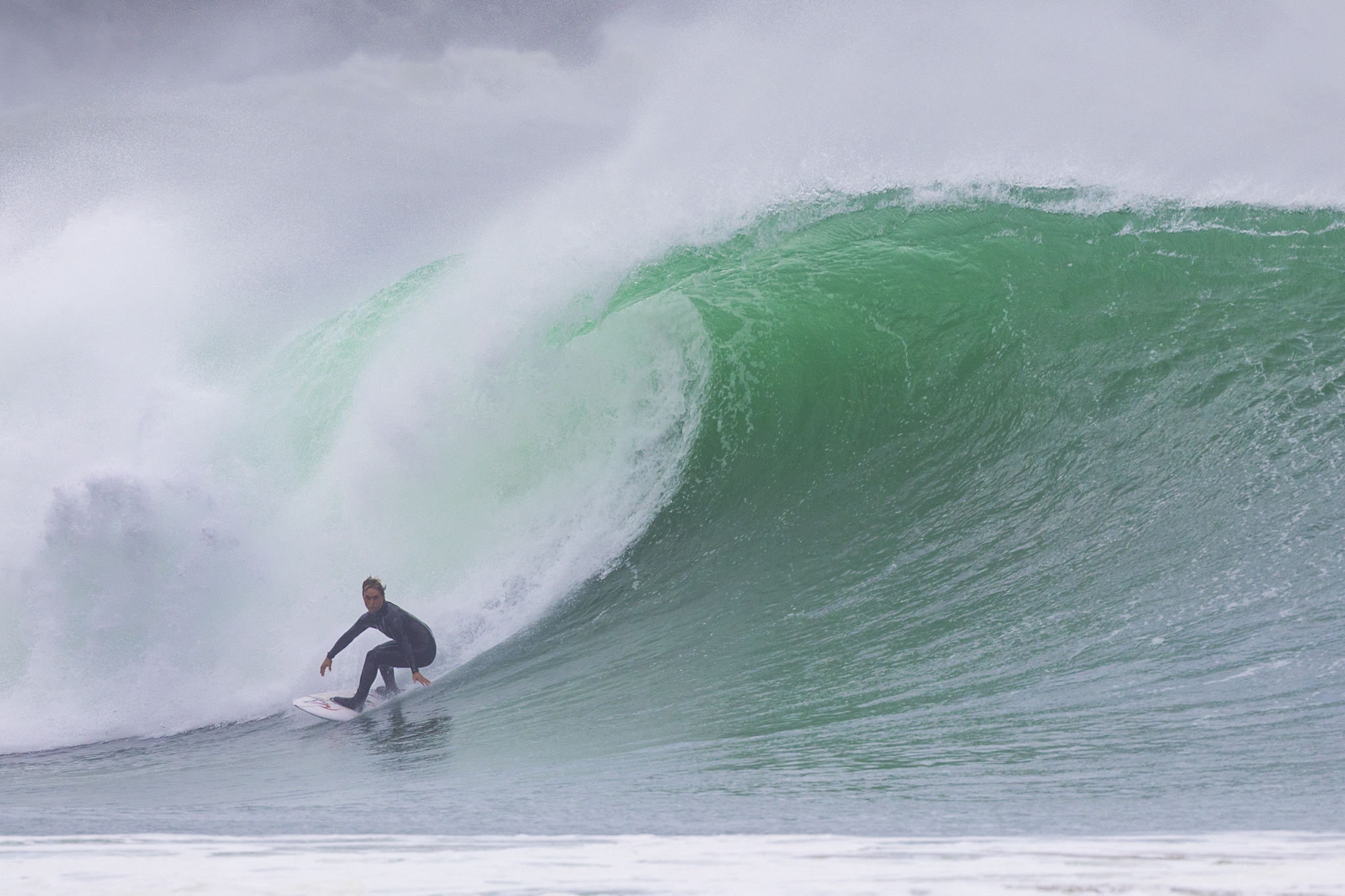 Also harvesting waves from the outside peak, playing the patience game, was Elliot Paerata-Reid – again adding to his overall performance in the southern extremes.

With 40 people in the water the chaos was guaranteed to ensue. The ugly side of surfing rears its head and we get a few questionable moments. Here’s our number one with local big wave surfer Joe van der Geest, aka Joe Dirt, negotiating a jumper on a set wave. He was one of the local chargers to stand out in the conditions. 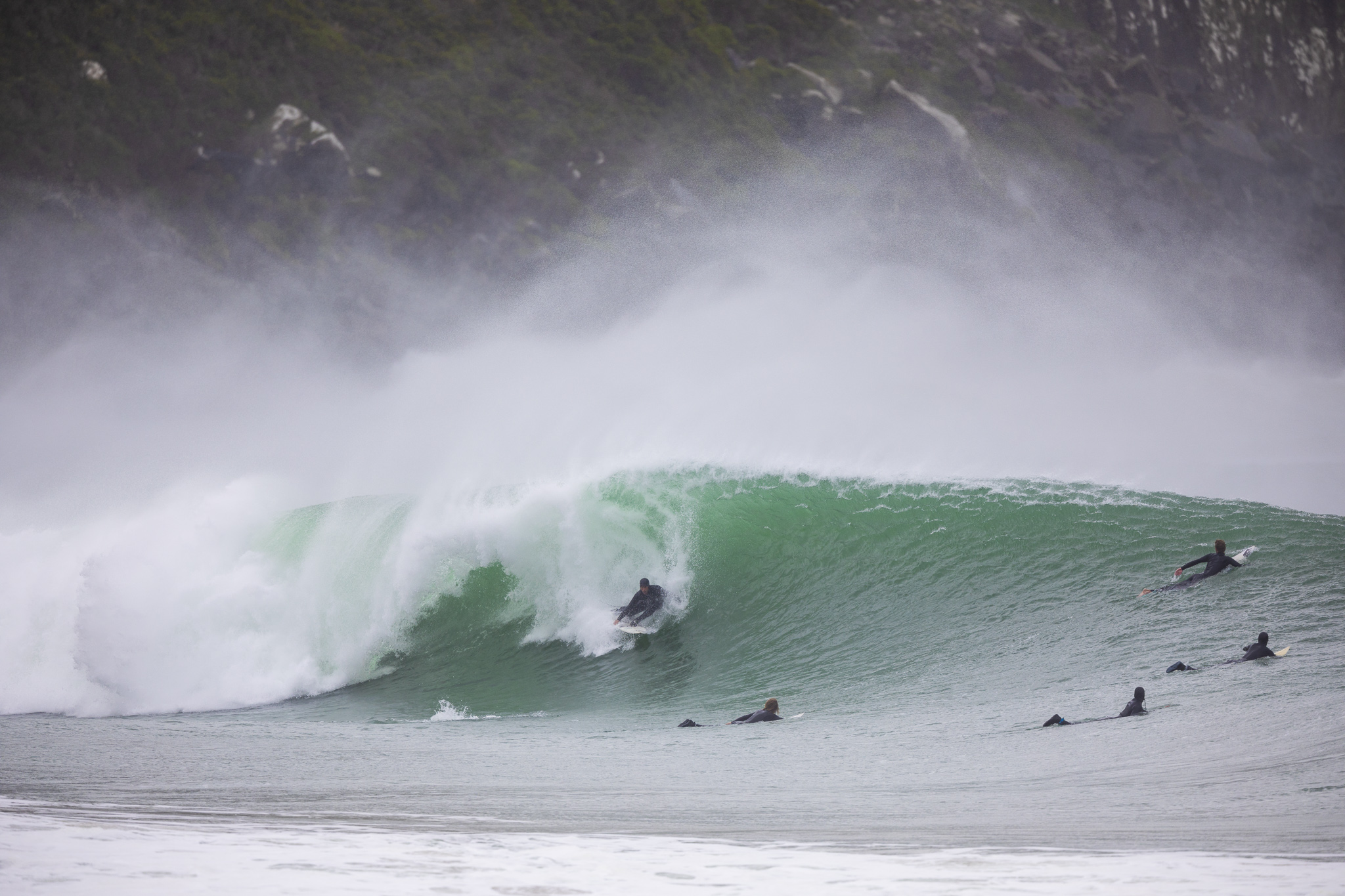 Local Dunedin surfer Jamie Civil is one of those surfers who prefers to let his actions do the talking. He’s a regular down here, usually surfs alone, but had been attracted at the thought of the peak pulsing through at max size. He’s one of the few regular surfers who can tame this place when it is at full throttle. His slides into the pit are the stuff of legend. And necessity.

So many contenders for this one with EPR, Dune and Billy all setting the standard. Here’s our top three: 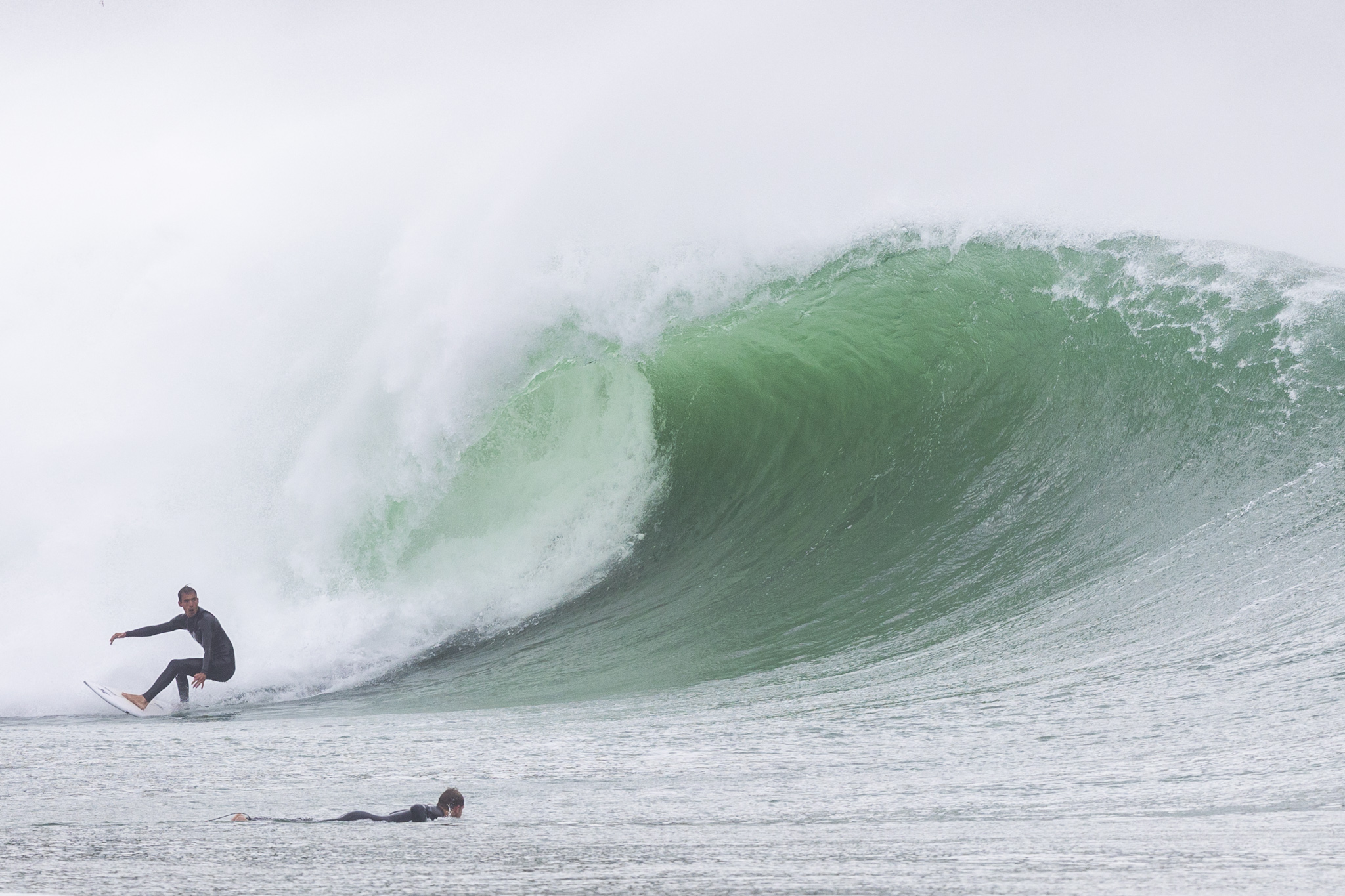 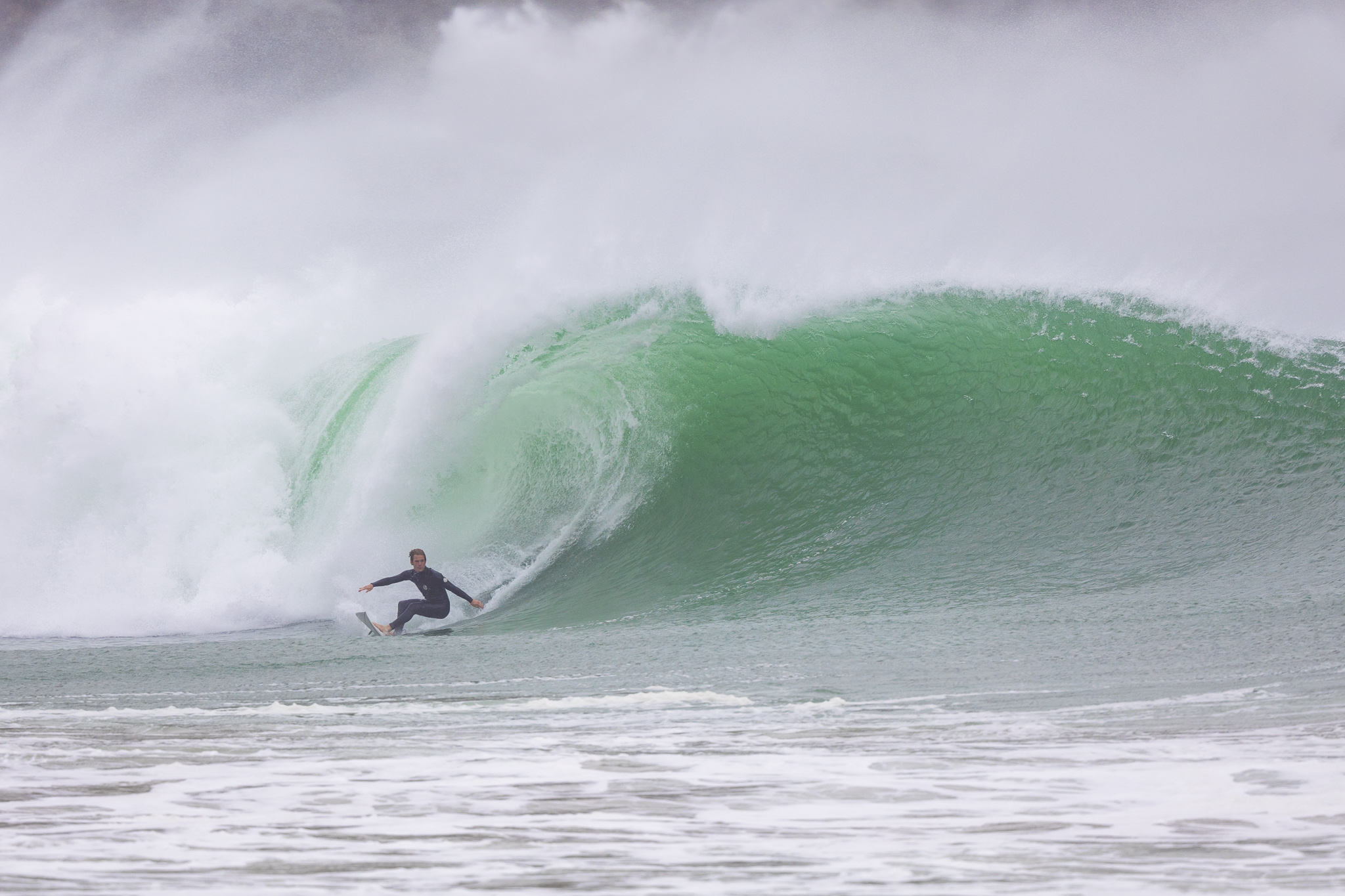 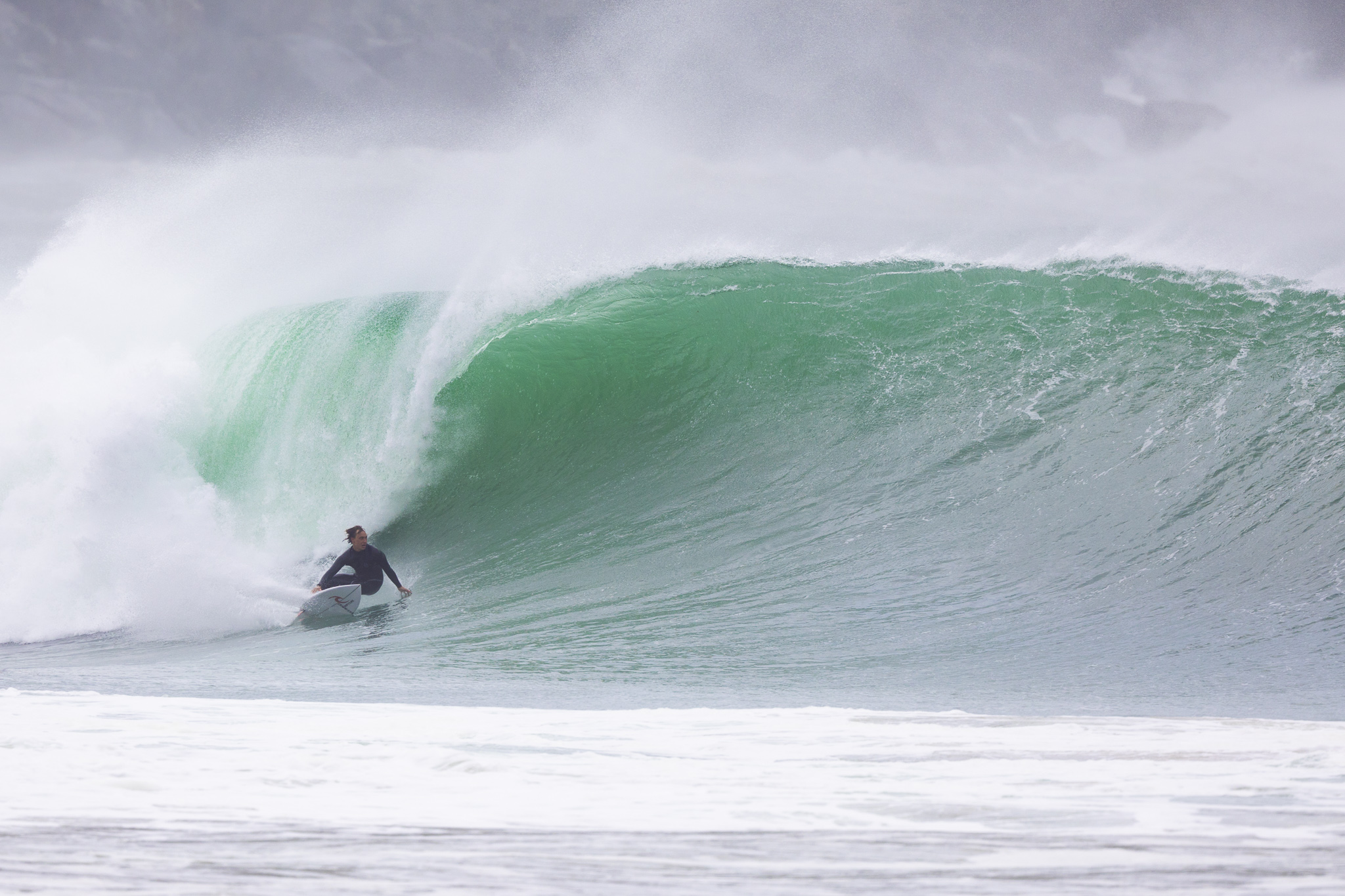 Again, a lot of contenders for this award with some unlikely names. Here’s our top three: 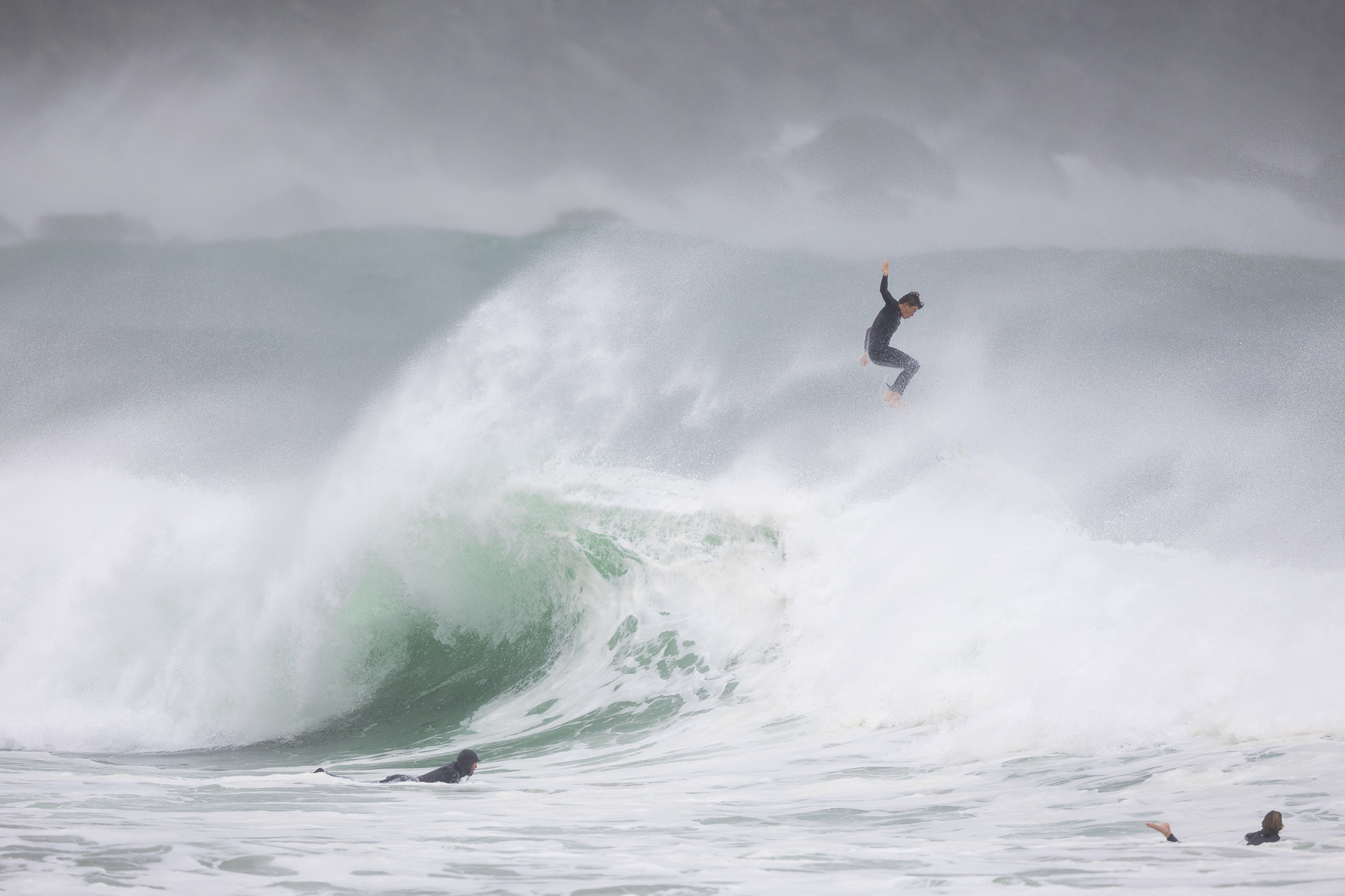 3: Exit Stage Right: nice exit, but quite a long way to fall off the back of waves like this. 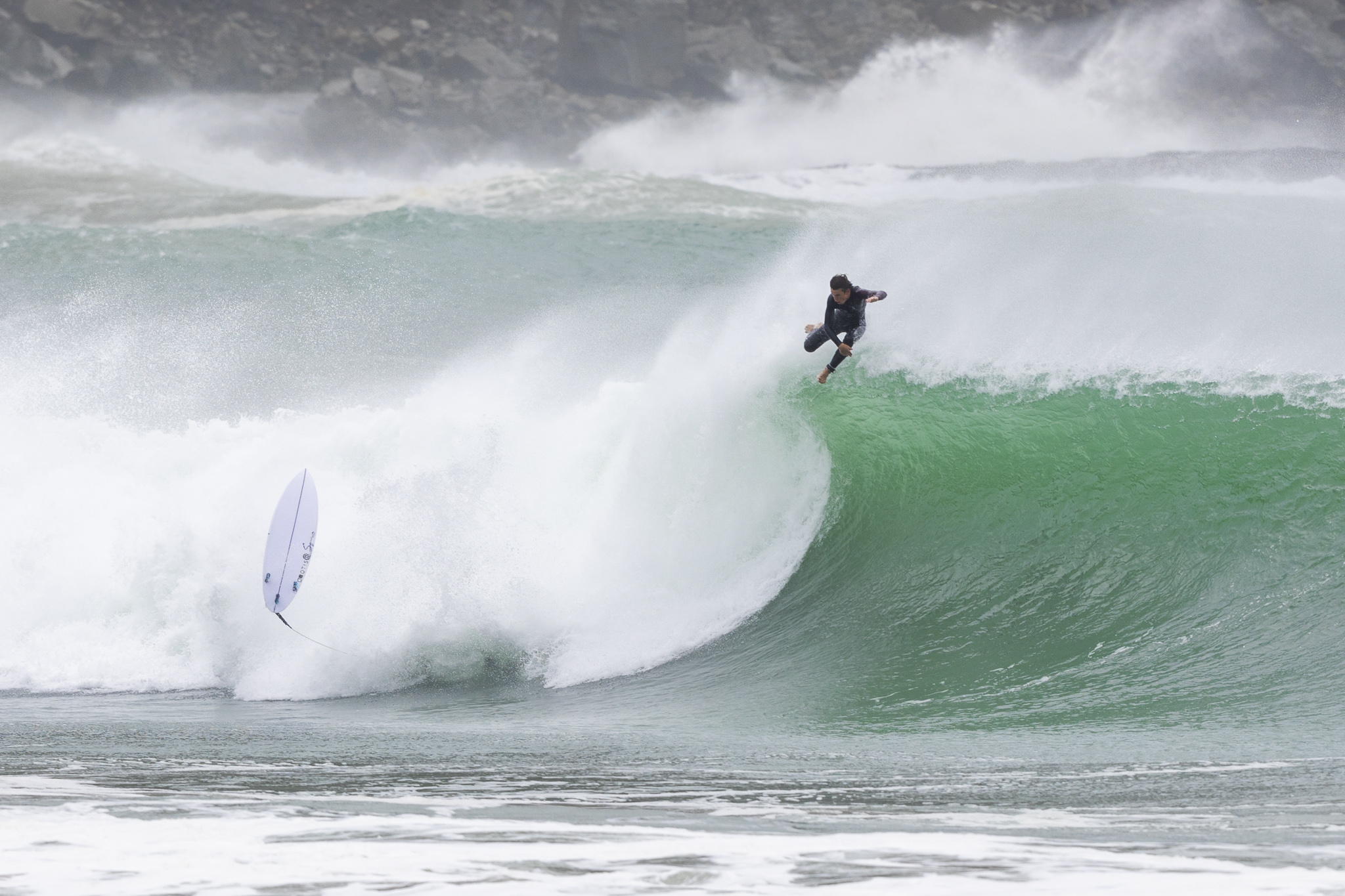 2: Ejected: When the wave hits the bank it can double up super fast and send your ankles through your shoulders before you know what’s happened. 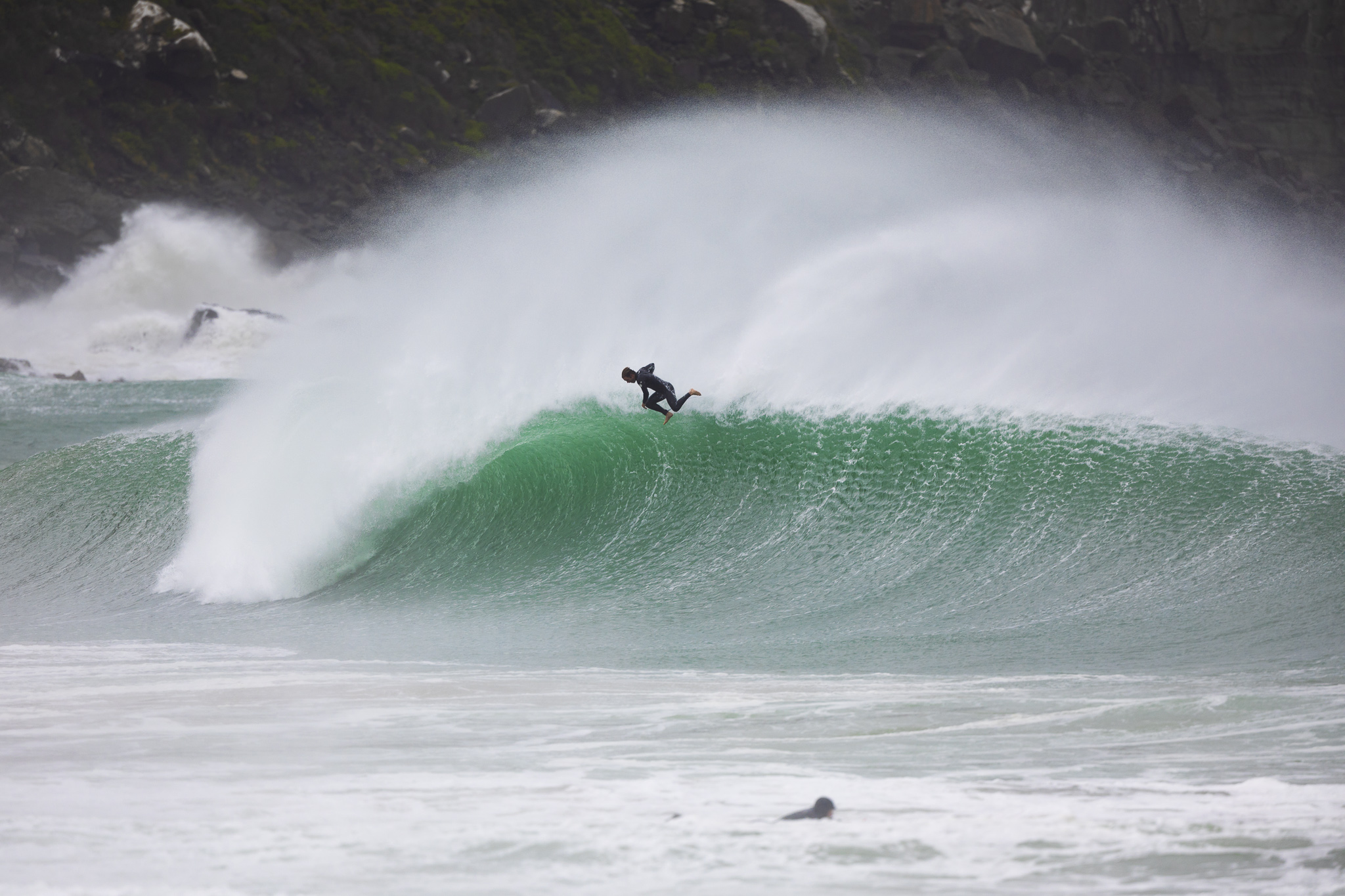 1: The Launch: Billy Stairmand gets wind under his board and the timing wrong (didn’t happen a lot). He gets the Pitching Gong for his efforts. Will probably hang that right next to his string of National Championship trophies. But spare a thought for the defending national champ – he weighs in at just 65kg. Even paddling into the 30-45km/h winds is a mammoth effort with that mass. And he’s riding a 5’11” board, “that’s a massive step for me,” he explains. “I normally ride a 5’7″ – the 5’11” felt good.” 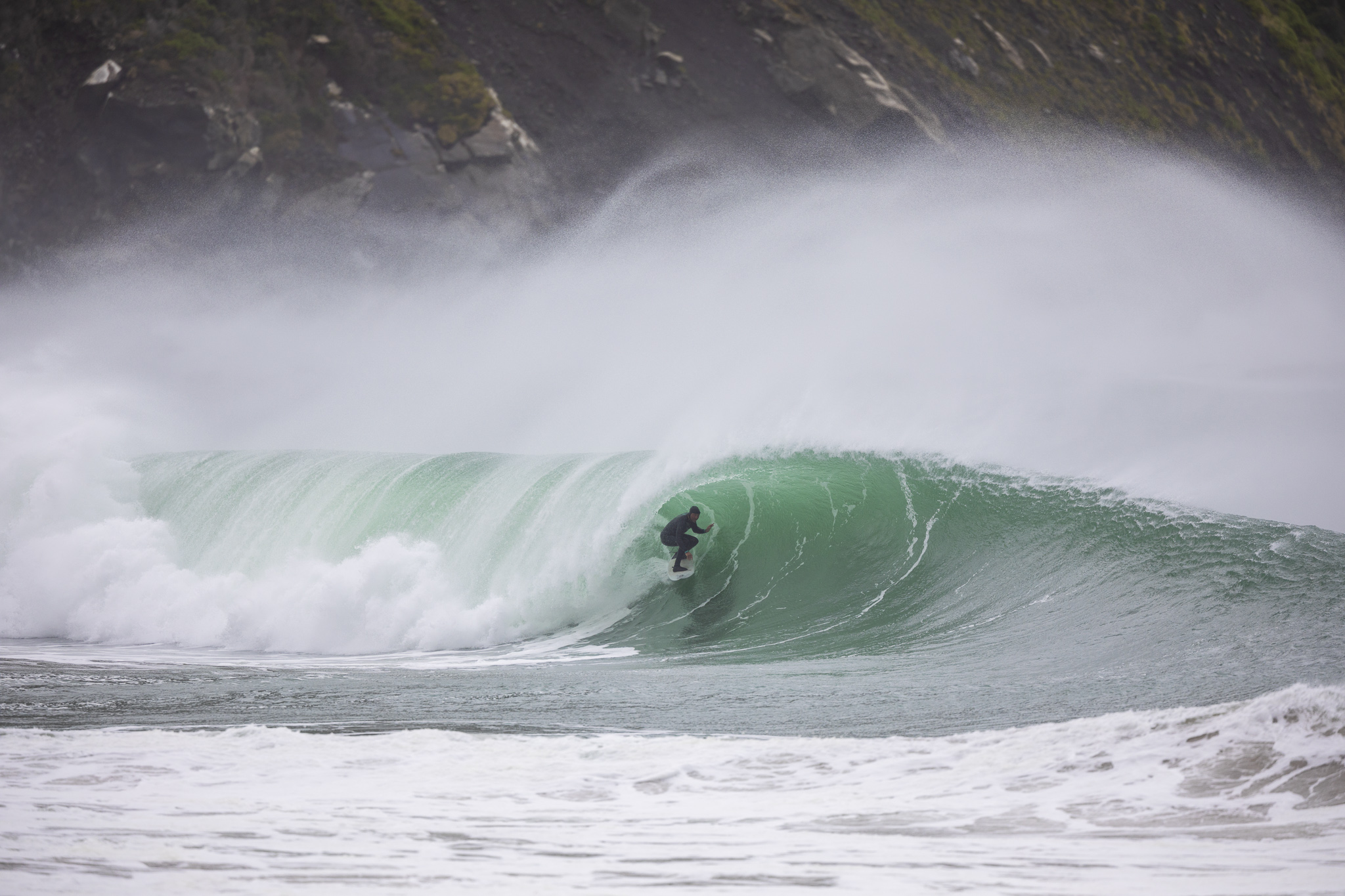 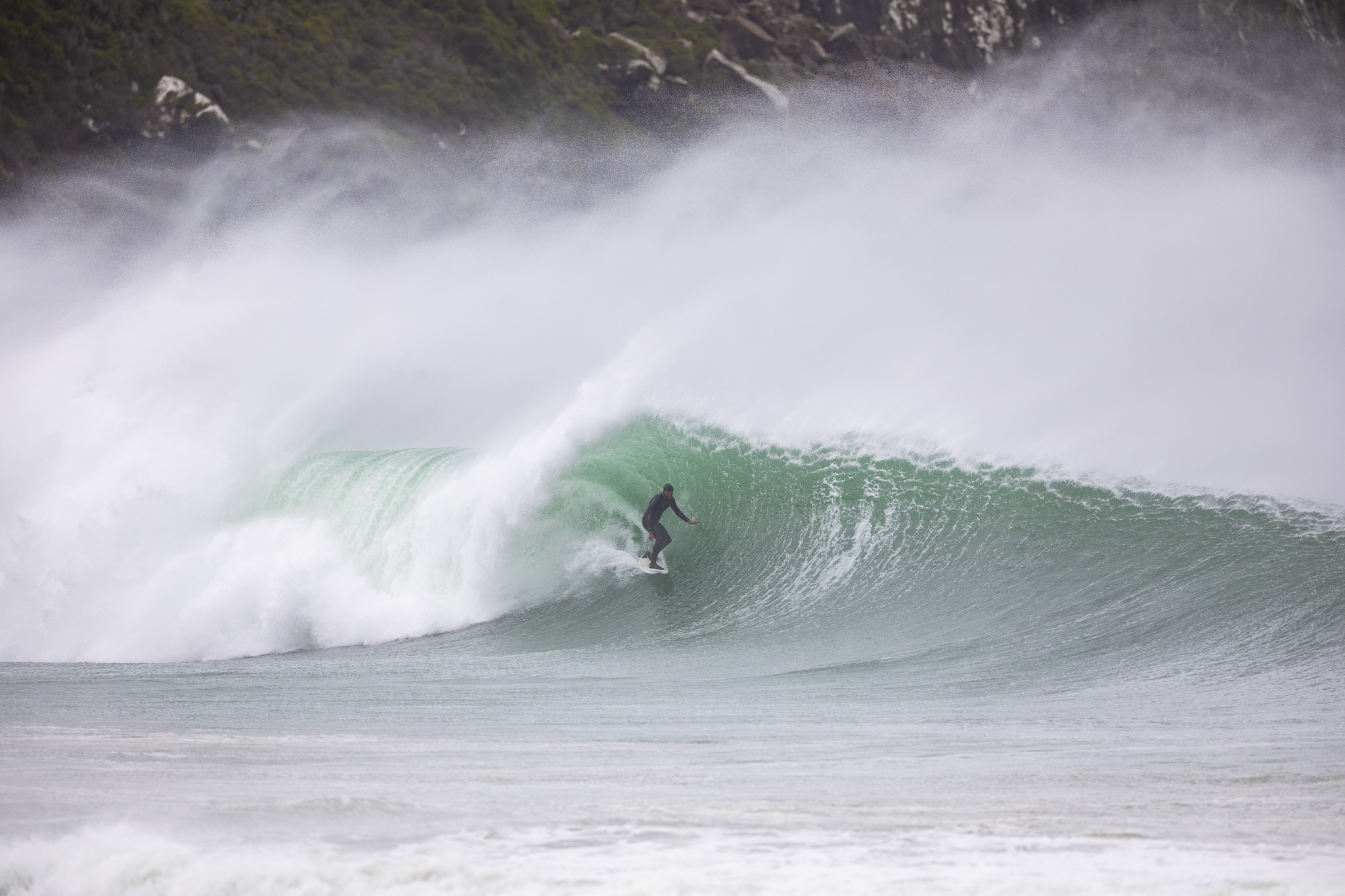 Chris “Bugsy” Malone is the quiet achiever and he just chipped away casually in the Super Heat racking up some incredible vision. He reckons he has been surfing more these past few years than he ever has and most of that time is focused on the Ledge at Raglan. During the Super Heat, that dealt him a hand of aces.

Another Raglan surfer claims the grom charger award with 15-year-old Kora Cooper putting on a frenzied campaign to figure out the warping lefts. He takes the mantle with plenty of deep barrels and he even made it out of some. Nice to see his flair and determination focused on a near-perfect wave. One to watch here.

This bay needs a perfect set of conditions to create the perfect barrel. With a west south west swell firing in the swell energy is forced across the mouth of the bay and into the cliffs to the north, which warps the barrels. The lefts clamp shut and the rights can detonate in an end section that comes out of nowhere. It’s far from perfect. But there are the odd ones, usually the biggest sets, that push the peaks back into shape. 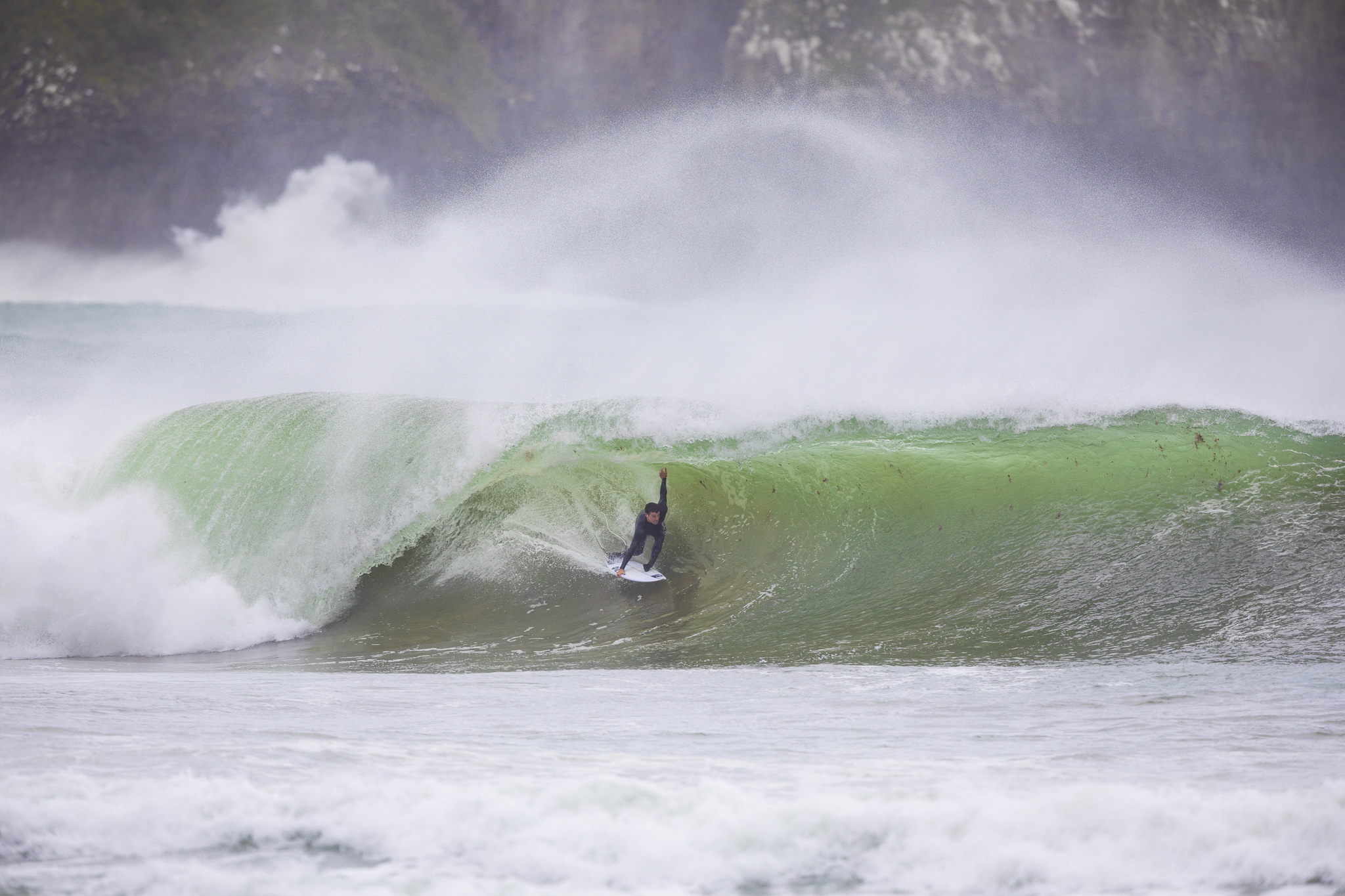 Fresh back from a late season stint in Nias, Paul Moretti found his way into some of the deepest caverns. Most of them pinched shut to extinguish his exit ambition, but he’d be pretty happy with his commitment inside some of these green vortexes.

Honourable mention must got to local surfer Jamie Civil. 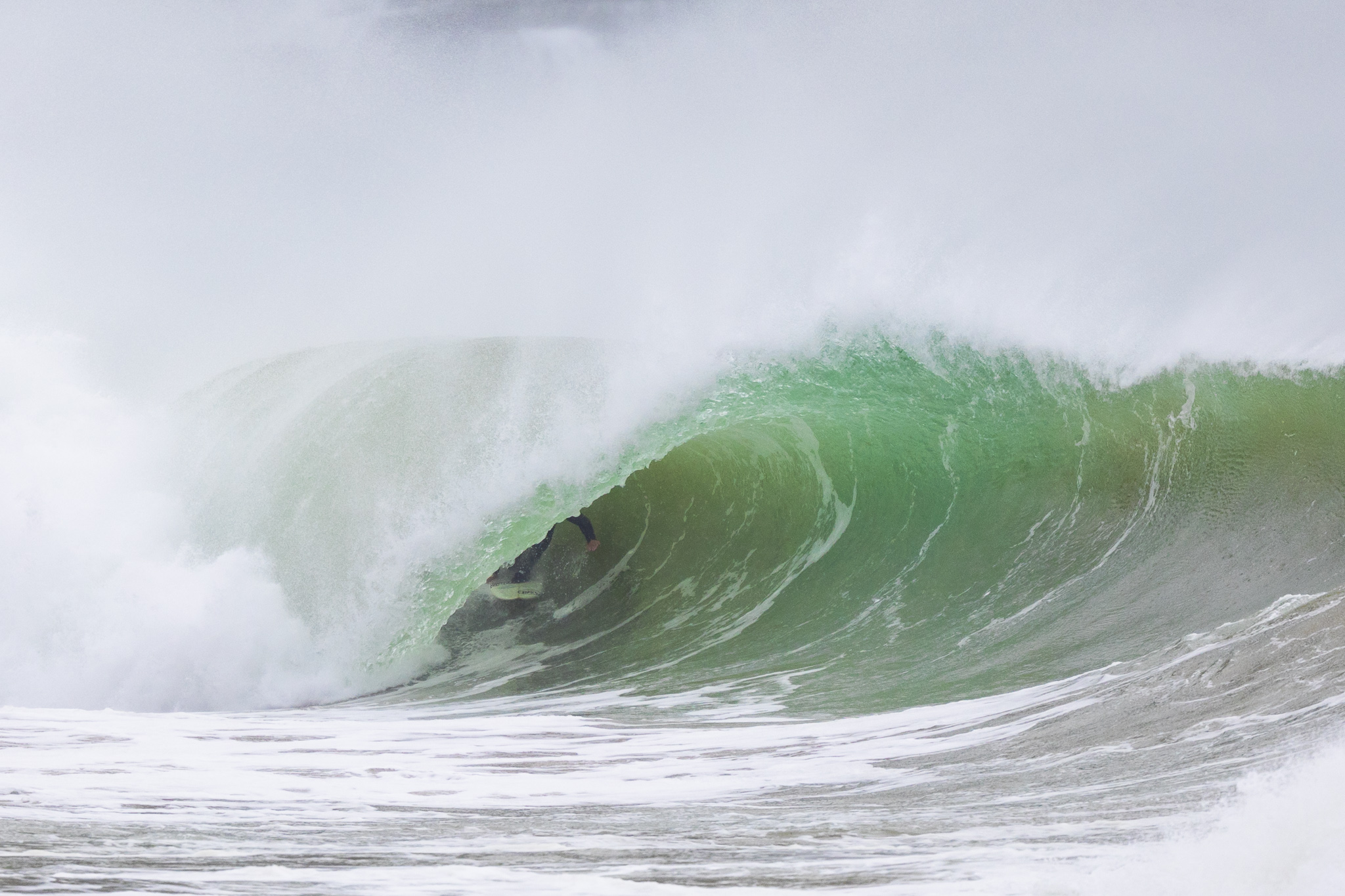 This is where he has made his hay over the past 10 years. Among all the deepest barrels ridden during the Super Heat, Jamie exercised the most patience waiting for the step up in swell that never really came. Regardless, he still found some of the most impressive.

Not many people come to the Catlins to do turns. And certainly not to this bay. With the swell the angle it was it opened up a few shoulders and laid the canvas for a few big end-section turns that only a very few people would stick. Here’s our top three:

3. Paul Moretti (not one to shy away from a suitable canvas) 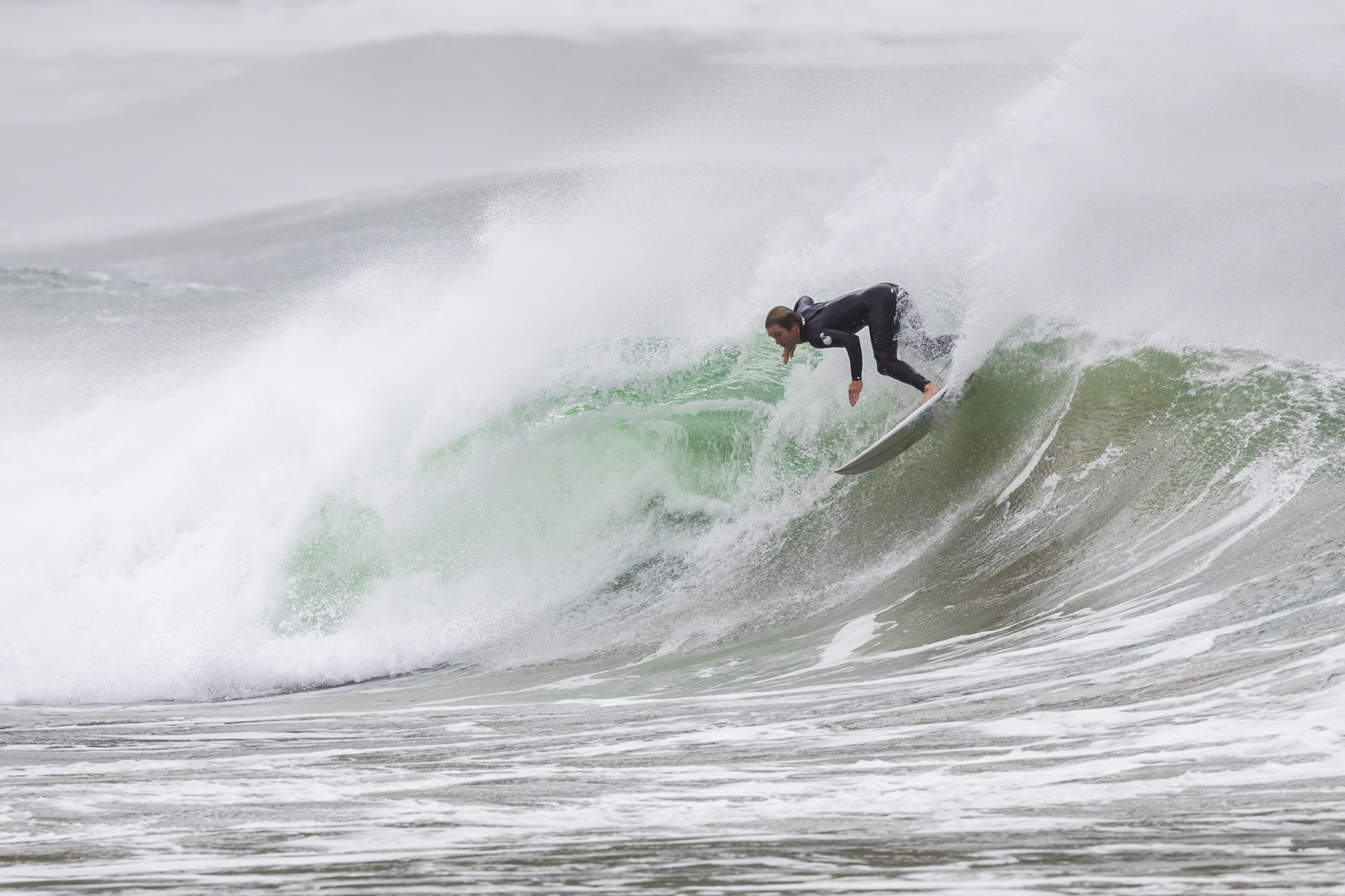 2. Billy Stairmand (he actually hit three turns like this on one wave)

1. Elliot Paerata-Reid (and he stuck this one) 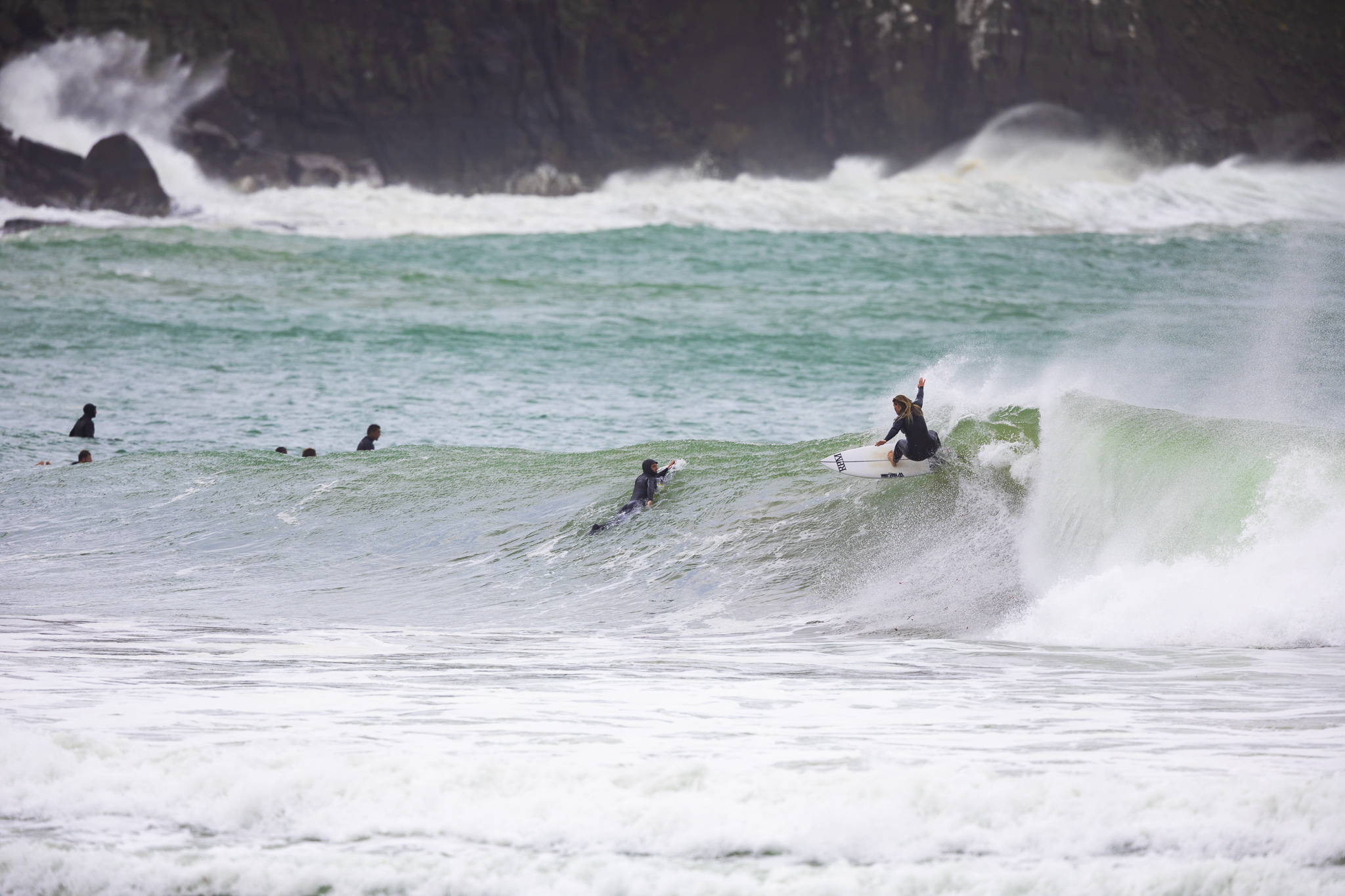 Easily claimed by Aimee Brown with her attack on the rights, while avoiding the testosterone fueled chaos unraveling on the lefts. Full respect.

Contenders in the best late drop are lucky not to end up in the best pitching. Somehow they managed to get fibreglass to the face. Some for their sheer grit and determination and others worthy for their style off the peak. Here’s our top three: 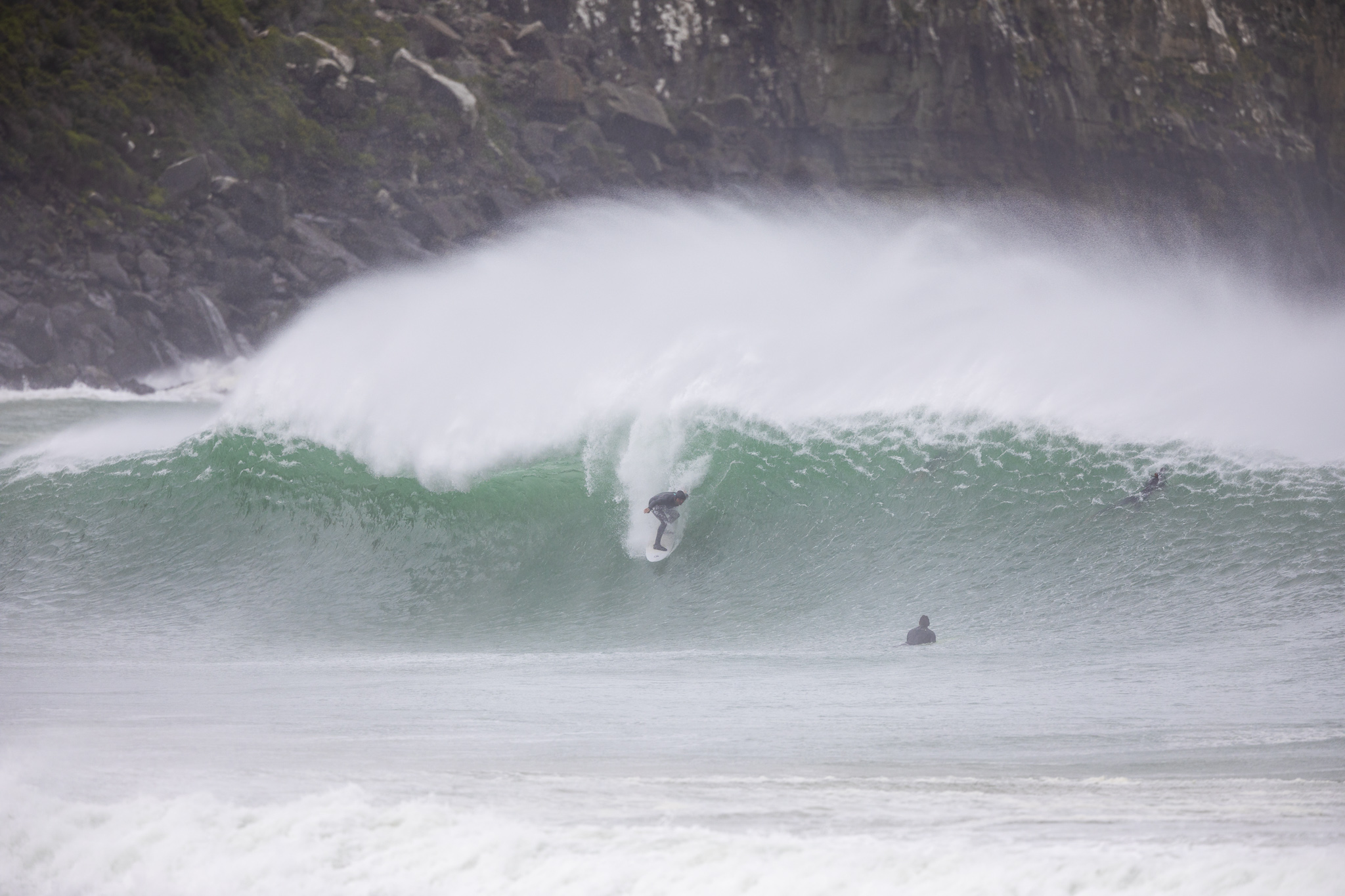 3: Bugsy Malone casual as can be as he effortlessly slides into this one. 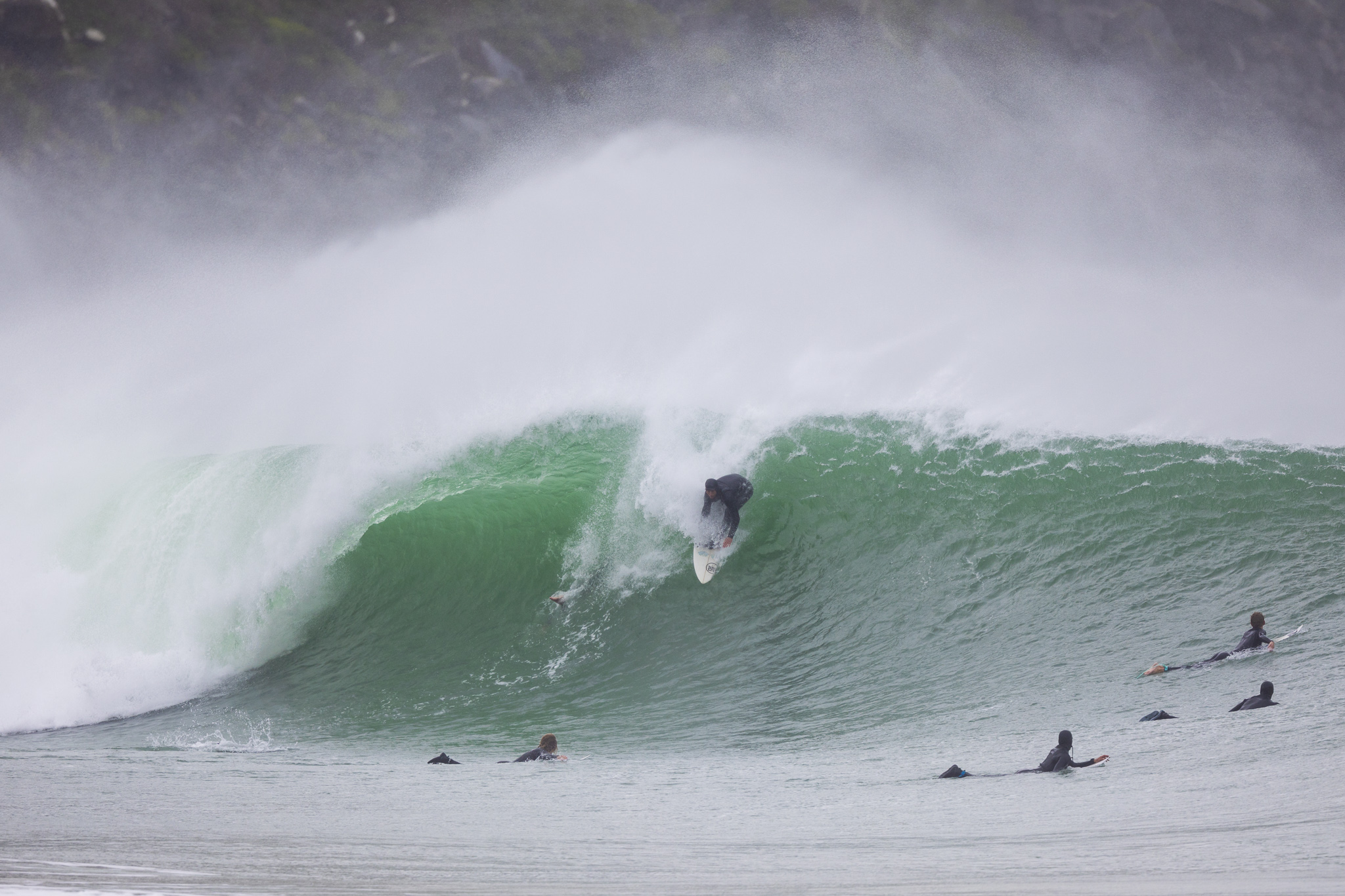 2: Jamie Civil is the master out here and loves that fine line between a great wave and a thorough rinsing. 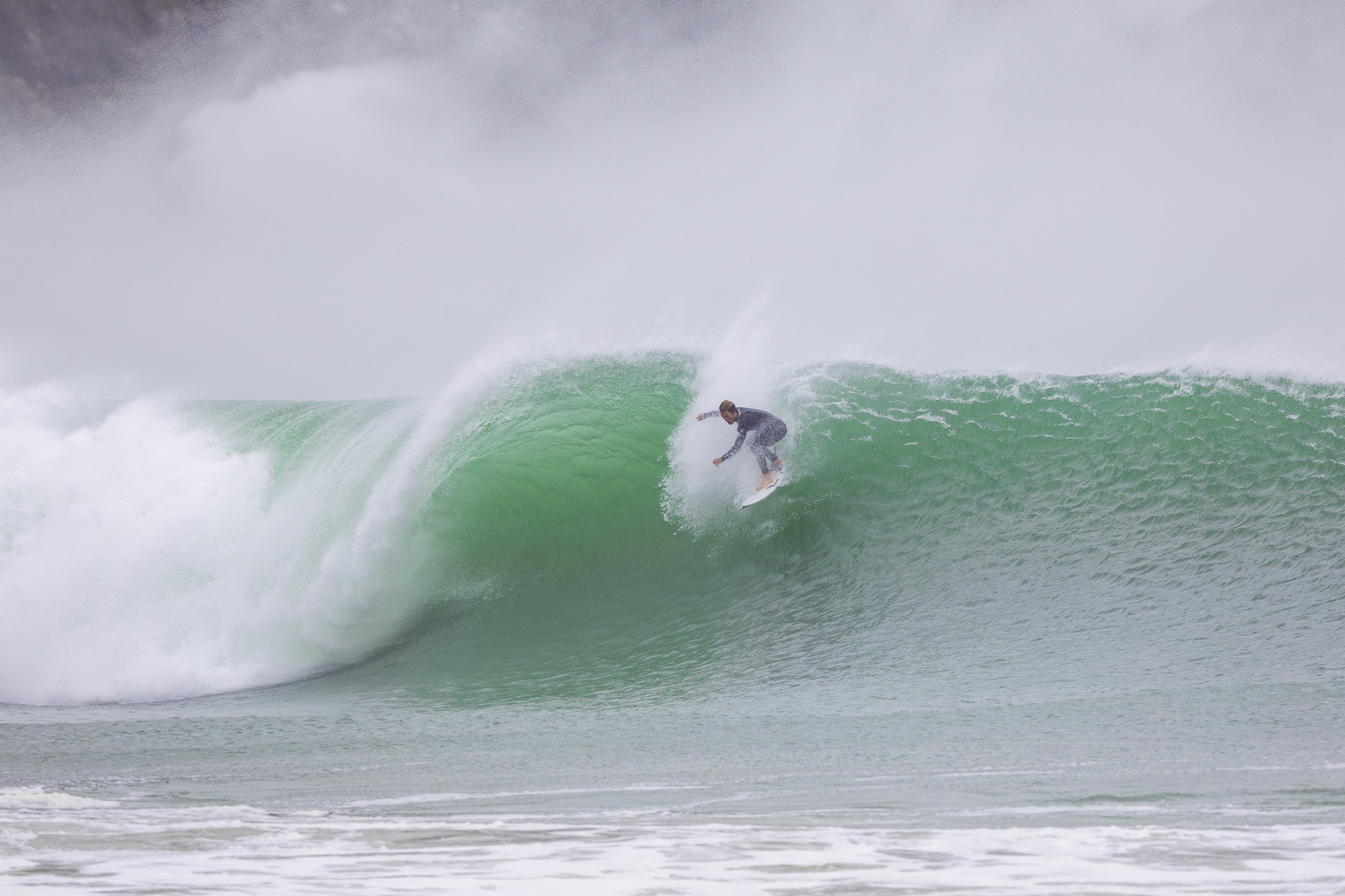 1: Billy Stairmand takes another top mantle, well deserved with air under his board as he plummets into this one.

This is a tricky one to award. There were certainly a handful of standouts with Elliot Paerata-Reid, Billy Stairmand, Paul Moretti and Dune Kennings rising to the top in terms of variety, quality and size of waves ridden. But there must be a winner in the 2020 New Zealand Surf Open, so here’s your champion for 2020: 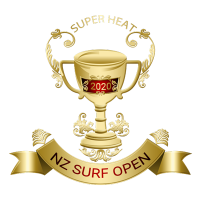 Find the story of the Health 2000 New Zealand Surfing Nationals for 2020 right here.

Born in the Waikato, Derek has worked as a photographer since 1994. During that time he has surfed and photographed extensively throughout New Zealand the Pacific, South Africa and Australia. Derek founded New Zealand Surf Journal in 2018 to "raise the tide for all boats" by shining a light on the New Zealand surf industry. He lives in Dunedin with his wife, Rachael and three children, Taya, Rewa and Keo. Derek was recently named New Zealand Geographic Photographer of the Year for 2018.

This site uses Akismet to reduce spam. Learn how your comment data is processed.

Change Location
To find awesome listings near you!