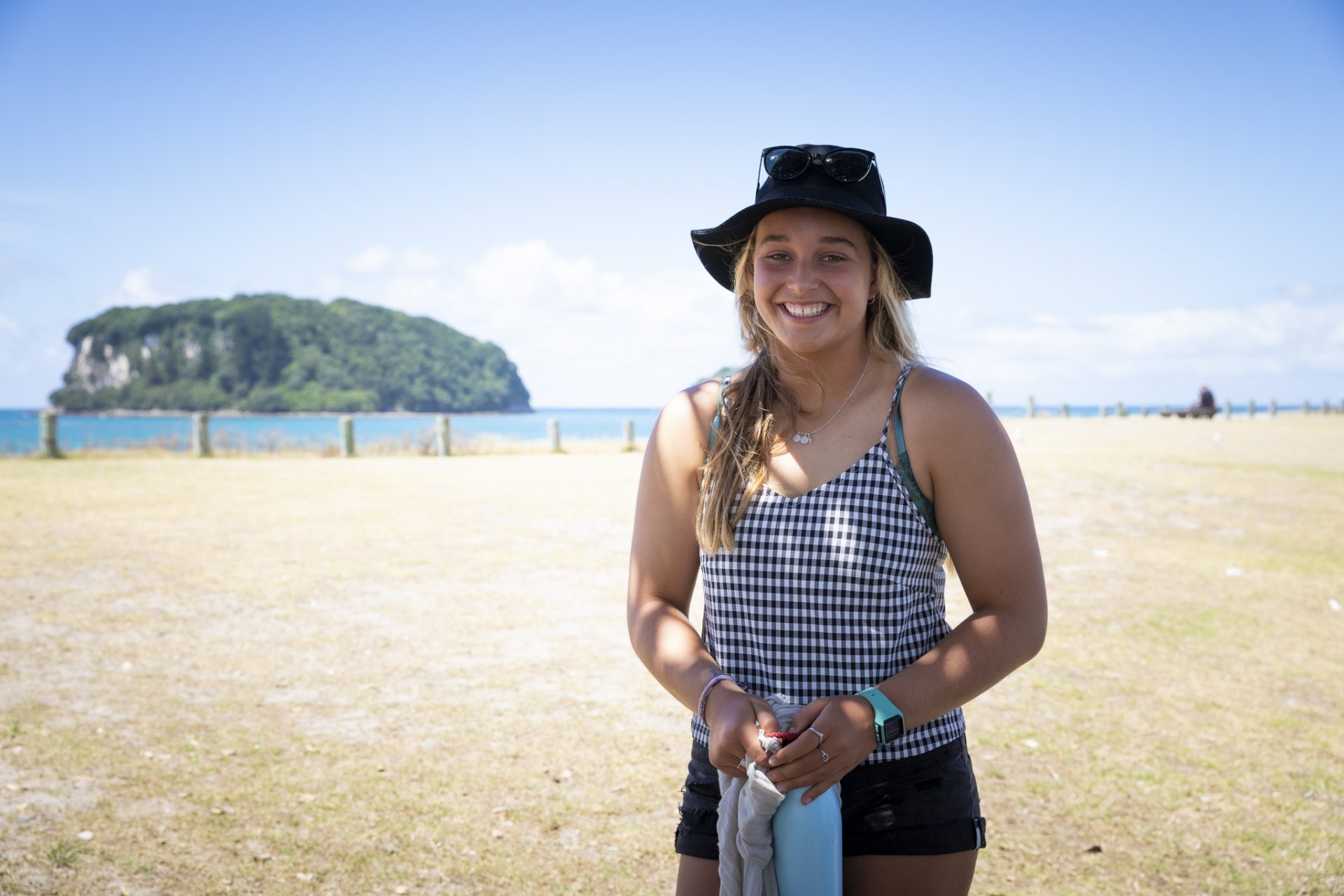 From a stellar run at the 2021 Nationals to a string of top results in the Billabong Grom Series, 16-year-old Anna Brock, is on a performance surge right now.

We sit down with the Mount Maunganui-based surfer right before her Under 16 final at the Billabong Grom Comp at Whangamata. She’s trying to decide between her groveller board or her all-rounder.

NZSJ: Hello, Anna. Tell us where you live and who you surf with?

Anna Brock: I come from Mount Maunganui. We were at Tay Street and now live at Crossroads – a little beach break with small waves. I come to the comps with my family of four. My sister, Sophia, and I compete in the same division this year, which is interesting. We’re both very competitive. So it’s always bragging rights.

NZSJ: Are you Island regulars?

Anna Brock: We get to The Island a little bit, but I wish it could be more. We’re thinking of getting a jet ski, which would mean we’d get over there more often. I’m going to keep convincing mum and dad.

NZSJ: How was the first round of the Billabong Grom Series for you?

Anna Brock: At the Mount Billabong I got second by half a point. That was a bit frustrating. Asia (Braithwaite) beat me there. But it si still a pretty good result – I was quite happy with it. My sister got third, so that was pretty cool, too.

NZSJ: You’re about to head out for your Under 16 Final here in Whangamata, how are you feeling?

Anna Brock: Well, I won my quarter yesterday and then got second today in the semis. So, for the final I’m hoping to give it everything. The waves are pretty tricky. I’m using my grovel board, which I don’t normally use in a comp. I think it worked in the semi – I could get into the waves a little bit easier. It’s pretty tricky out there. I rode my all-rounder board at The Mount – I get more speed with it. It is a 5-foot 6-and-a-half Pete Anderson board from here in Whangamata. I’ve just jumped ship from Andy Jordan who has moved to Japan. This is my second board off him – I had one which was a 5’6″. And then right before the nationals – two weeks before, he got two boards out, which are the two main ones I’m using now. I’m really liking his boards at the moment. They’re going really good.

NZSJ: We spotted you early one morning at the start of summer training with Matt Scorringe from the Art of Surfing. Is that a regular part of your program?

Anna Brock: Through term four we were doing that once a week. He does weekly groups, different age groups and levels. It was me and my sister, a couple of other younger girls and a couple of girls my age as well. We’ve done quite a few of his weekly girls groups over the years. Hopefully we’re going to get more into one on one coaching or two on one with my sister. I reckon that would be pretty beneficial.

NZSJ: Sophia’s surfing really well right now, also – what’s that like having her to surf with daily?

Anna Brock: My sister and I always push each other, we always compete in the water. Most of the time we’ll always be comparing waves, ‘hey, was that a good one?’ We’re always seeing if we’ve got better waves than each other. My sister’s definitely nudging me and putting everything forward for herself and pushing me. It’s pretty good having someone to surf with everyday.

NZSJ: How far would you go in competition to beat her? If you had priority, and she was trying to take off on a wave, would you stand up and force and interference?

Anna Brock: If I had priority, then definitely. One hundred percent … no questions asked. We’re that competitive. She would do the same to me.

NZSJ: Tell us about your amazing Nationals run at Piha.

Anna Brock: That was probably my best result I’ve ever had. I was second in Under 16 Girls, fourth in Under 18 Girls and fifth in Open Women. Getting knocked out by Paige (Hareb) and Ella (Williams) in the semi-final was, well, I was quite happy really. I couldn’t have asked for much more – a good way to go down. That was a good result. And then doubling the divisions in the finals – I was a bit tired by the end. It is a lot of surfing and the girls heats are all jammed up on two different days. It was good practice though.

NZSJ: Your trajectory has kind of blown up in these past few years. What’s driving that?

Anna Brock: I’m grovelling in the Mount conditions as much as I can and I’ve been working at the gym. I’ve changed gyms and I’m now going to the High Performance Centre in the Mount, which is run by University of Waikato. So that’s good as well – a new trainer with set programs for surfing. I’m in there about two times a week, although I haven’t maintained that over summer, just because we’ve been busy with surfing and surf comps. We’ve just started getting back into it again. I’ll spend an hour to an hour-and-a-half at each session. Through the year I also do a lot of running outside of the gym training. I was really into my running, especially through lockdown and then I injured my hip. I had to stop for a little bit. So, I wasn’t running for a bit and then I got back into it. That’s my cardio training and for the gym, it’s mainly strength, power and agility. I’ve been doing gym training for years now. I started at another gym probably four years ago.

NZSJ: What’s your goal for this year?

Anna Brock: Well, it would have been making the Under 16 New Zealand team, but because of Covid I doubt it will go ahead. The top three girls go, so I’d hope to make that team. We were also planning to go to Australia and probably do a few more comps, so it’s a little bit hard now with travel. We just have to keep working on it, keep moving and enjoying it.

NZSJ: You’re at a time when you need to keep that accelerator down. How do you keep moving forward without the ability to surf against better surfers in Australia, or internationally?

Anna Brock: It’s hard when we’re on different ends of the country or spread throughout it. You’ll see videos on social media and you’re like, ‘Oh, I need to get out there and push myself harder and do better’. But when we are at the comps there’s always a group of us that really want it. Definitely with girls like Ava, and there’s a few other girls as well, that have pushed me for the last year. Well, actually probably for the past three years now. They’ve all been pushing me and I’ve always wanted it. I think the level has risen as a result. T there’s a smaller group of fiercer competitors if that makes sense. The last few comps I’ve been second – at the Nationals was by 0.7 and then at The Mount it was 0.6. So, I feel like I want more now. I really want this one, so they are definitely pushing me.

NZSJ: Who is backing team Brock these days?

Anna Brock: We have Almighty as a sponsor. They’re really cool and make organic juices and sugar-free sparkling waters. Along with Almighty I’m with Smoothstar Skateboards. I’ve been on their team for almost two years now. We train on those quite a bit. It’s great to have them to train on and practice out of the water. The Mount’s often flat, so, it’s quite good to have a land simulator. We’ve just started with Pete Anderson as well and we’re hoping to keep working with him and see where things go.

NZSJ: Almighty is a good fit, with you being sugar free, is that right?

Anna Brock: Yes, I’ve been sugar-free since the start of 2020. It was my New Year resolution. I’d like to say yes, that has made a big difference, but I don’t know. When I was eating sugar, I did feel a bit sick. I feel like I’m in a healthier mindset now – I feel healthier. I did have a piece of cake for my birthday last year, but apart from that, it’s been good. That’s one thing I can improve on is that healthy diet. I feel I could go a bit further with that. Whereas I see some of the other girls eating crap. That’s one thing I’ve got on some of them. Even my sister and my family, they still eat like the odd bit of sugar and I’m just like, “no, I don’t even want it anymore”. I still eat fruit so plenty of natural sugar there.

NZSJ: You’re about to go out here for your final. What’s your strategy?

Anna Brock: Well, I haven’t been looking at it for a little bit, but it was probably the set waves. They looked a bit better because they ran a bit more and had a bit more power in the wave to do better turns. I saw a couple of other surfers getting them and getting good scores. I want to keep busy and try to get an early wave and get my head in the game at the start and keep a clear mind. I’m gonna give it a run! I’m still tossing it up, but I think I’ll take the groveller out – it did go pretty well in the last heat, so, I think I’ll use it. I’m still tossing it up.

NZSJ: Are you sure that’s the right choice?

Anna Brock: Maybe my all-rounder. No, definitely the groveller.

NZSJ: Well, congratulations on an awesome year and just keep that foot flat and just go as far as you can, Anna.