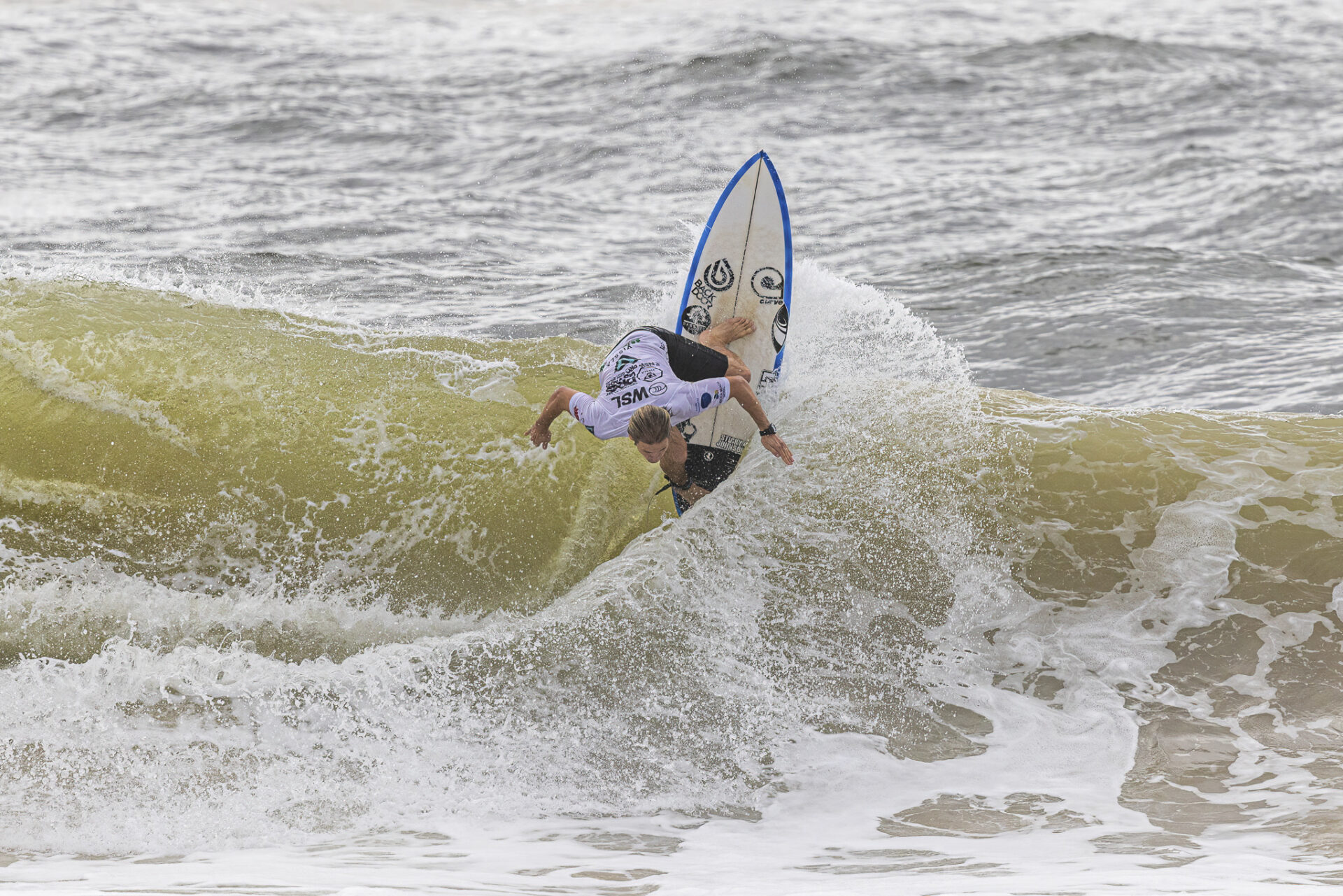 Billy Stairmand and Kehu Butler have today surfed their way into the quarterfinals at the Vissla Central Coast Pro being held at Avoca Beach, NSW.

That start puts them into contention for at least 1500 of the 3000 points on offer at the event – which sets them up superbly in the Australia/Oceania 2021/2022 Men’s Qualifying Series Rankings. Any result from here will bring them within striking distance of Challenger Series contention – the final stepping stone to the World Championship Tour.

Billy and Kehu were joined by Levi Stewart in the men’s with Paige Hareb, Saffi Vette and Tiana-Breeze De Mooij representing New Zealand in the Women’s.

One thing that is standing out this season is the camaraderie between the Kiwi surfers. That was something Billy was determined to bring to the Australia/Oceania QS season.

“I learnt a lot last year travelling on the Challenger Series with the Australian boys and I saw how they were all there for one another,” Billy explains. “I wanted to bring that into the regional events for the Kiwis. We are all gelling really well and getting along with each other as well as motivating and supporting one another. When you’re having fun and travelling with the right people you’ll always succeed.”

The rest of the team agrees.

“Our Kiwi crew is epic,” laughs Kehu. “We have the (dad) of the group, Billy, sorting out all the accommodation and stuff, so that leaves me, Saffi and Levi with no stress on our shoulders leading up to an event. We’re very grateful to have someone like Billy, who has done this for the past 10 years, help us out.”

“We’ve been doing film swaps giving each other feedback to help improve ourselves leading up to a heat,” Kehu continues. “We also have a rugby ball with us everywhere we go, which is a huge part in our warm ups pre-heat – trying to activate smaller muscles in our arms and core, as well as getting that quick reaction activated.”

“The highlight of this trip is just being here for the younger guys,” shares Billy. “I know what it’s like to travel overseas and how far away you feel from everyone. So I’ve kinda really been enjoying helping the group out as much as possible and trying to make them as comfortable as possible … and I try and give them some knowledge where I can. With that it makes me more motivated to do well in the comps and enjoy and appreciate what we do.”

In his Round of 16 heat today Kehu held second place and priority deep into the buzzer. There were a few tense moments for those watching, even moreso for Kehu.

“My strategy in the last heat with priority was very stressful,” he admits. “I aged five years in that last six minutes. I trusted my training to sit with priority and sit on third and fourth until the final hooter went.”

Kehu held his nerve and booked himself into the quarterfinals alongside Billy who did the same thing in the following heat.

“We have a goal for every event to get at least a minimum of quarterfinals,” Kehu explains. “Once we reach quarterfinals there’s a lot less stress on our shoulders and that allows us to open up and lift to the next level.”

Kehu’s previous events during this 2022 QS leg have included a 25th at the Crave Great Lakes Pro and a 17th at the Gage Roads Port Stephens Pro. We ask him if his strategy had changed for Avoca.

“My approach for this event in Avoca has been to catch heaps of waves and build my own rhythm when the ocean isn’t,” he offers. “I’ve been very grateful to train with Jay ‘Bottle’ Thompson over the past 12 months. He’s helped me a lot mentally and physically when it comes to heats and how to adapt under pressure to attack. So, yeah the plan is to keep the same energy and hopefully go all the way to the final … and to see Billy there.”

For Billy the Round of 16 would see him open a strong lead in the early stages of the heat before settling into second. He was able to outfox his rivals to the end. Another stellar use of priority to protect his strong start enough to book him a quarterfinals berth.

“Avoca has been epic,” Billy smiles. “We are staying in an epic place on the beach, playing ping pong and pool and competing with each other everyday. But seeing my team mates succeed is so amazing and also motivating. We [Kehu] are on other sides of the draw so hopefully we keep it going. It’s just an all round epic time with this crew and we are enjoying it all. The wins, the losses, the learnings and all in between.”

We ask Billy if he’s watching the rankings and how that might affect his performance.

“To be honest I’m not looking at the ratings,” he replies. “All that stuff doesn’t really matter until the series is finished. I’m taking it each contest at a time. Letting things happen and controlling what I can control and not worrying about what I can’t control. I feel comfortable and confident and am so happy. Hopefully that is showing in my surfing and results.”

The QS veteran of 13 seasons, Billy just keeps getting better fueled by his Olympic and Challenger Series taste in 2021.

“I’m actually enjoying every moment,” Billy admits. “Not many people get to do what we do and we are all appreciative of where we are and what we are doing. The hardest thing for me is being away from my wife and animal children.”

“But they are also so supportive,” he smiles.

For Levi Stewart, who was ranked at 69th going into Avoca, the nuances of the QS pressure-cooker are still to be tamed. The powerful natural footer finished 65th at the Carve Great Lakes Pro, then 33rd at the Gage Roads Port Stephens Pro, before bowing out in the Round of 32 for 25th here in Avoca.

In his last heat in Avoca, Levi seemed to be missing a score he could manufacture on any other day without even thinking.

“I just got a little lost in the lineup,” Levi reveals. “It has been a good learning curve – I try to learn from all my heats where I can. The crew is sick – all laughs and support all day. I’m loving every moment.”

The new format of the Australia/Oceania Qualifying Series has proved to be a game changer for Kiwi surfers. They’re competing against the best in Australia and New Zealand rather than the best from other countries. That levels the playing field somewhat. It doesn’t make it easier, but it makes it more accessible.

We’ll keep you posted as Kehu, who was ranked 35th heading into the event surfs in Quarterfinal 1 against Kalani Ball (currently 13th rank), most likely tomorrow. Ranked 16th heading in, Billy will surf in Quarterfinal 4 up against Jacob Willcox (ranked 6th). They’ll be some big heats, but the Kiwi duo has never been in better shape for it.

How To: Dial In Your Pre-Surf Stretch With Dr Oliver Farley