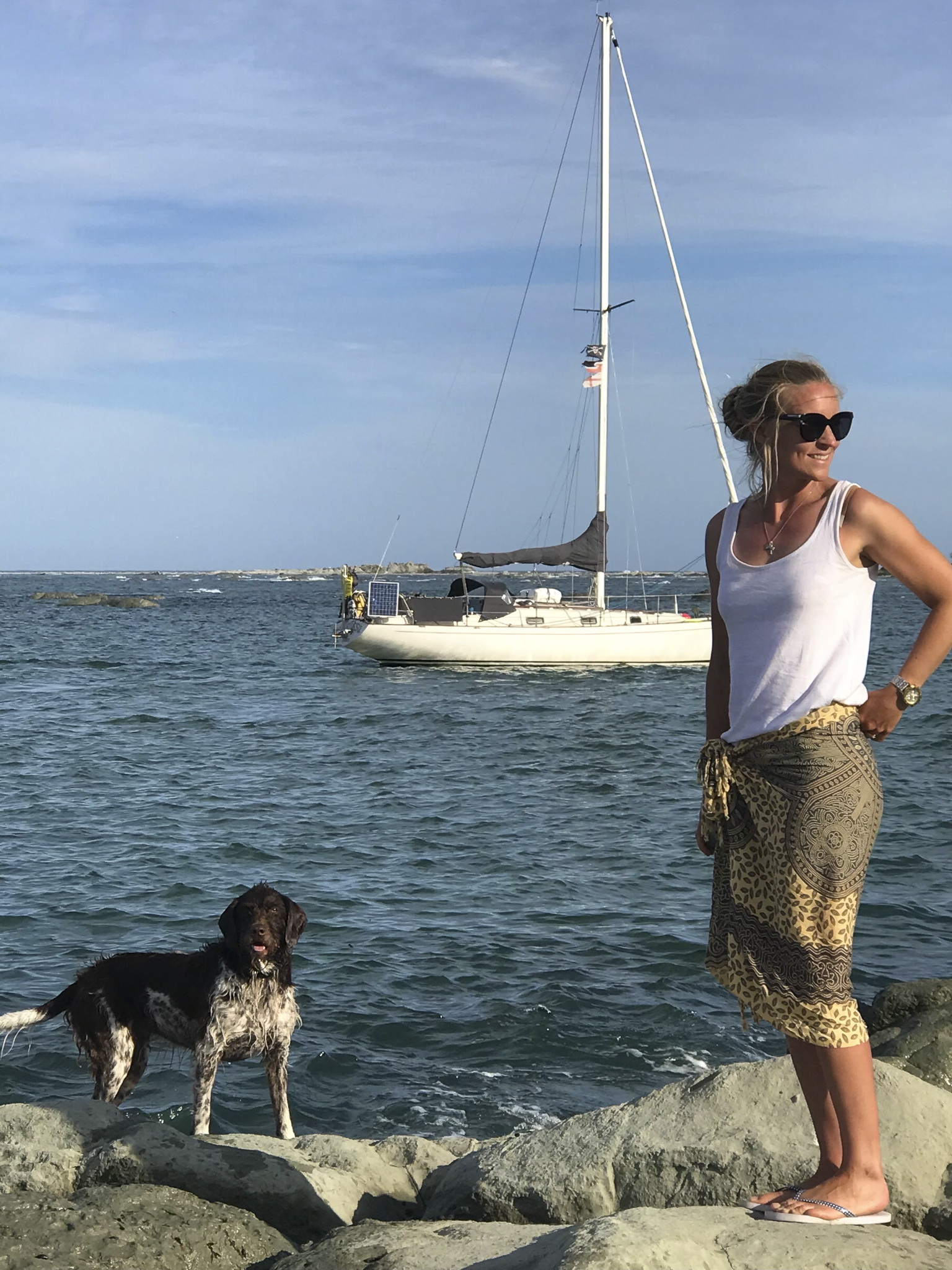 Lucy Te Moananui is a special kind of adventurer. She stumbled across sailing while at school and pursued her passion, adding in scuba diving and eventually surfing when she arrived in New Zealand 16 years ago.

In April 2023, the 39-year-old will line up on the start line of the Solo Trans-Tasman Yacht Challenge to take on her biggest challenge yet.

We’ve been following Lucy’s progress as she has been preparing her beloved Contessa 32, Nerissa K, for adventure. It’s an inspiring journey … you can jump aboard here.

Lucy has normalised high-performance at home. Her husband Al Te Moananui competes at the highest level and has just returned from representing New Zealand at the World Stand-Up Paddleboarding Championships. Lucy herself is the reigning New Zealand Over 35s Women’s Surfing Champion and won the Senior Women’s title in 2018.

That’s an impressive journey for a girl who grew up on a farm, in the rural midlands of England.

Her first experience with sailing came during a school trip to the South of France.

“I loved it,” Lucy smiles. “Following that, my mum and I bought a small boat and joined our local sailing club.”
As a university student Lucy trained as a scuba diving instructor – earned by training in inland quarries. After university, she moved to New Zealand.

“That was 16 years ago,” she shakes her head. “I learnt to surf, worked at Exit Surf and taught surfing lessons at Learn to Surf in Sumner. Since then I met my now husband, Al T, who encouraged me to enter some surfing competitions, and pushed me with my surfing.” 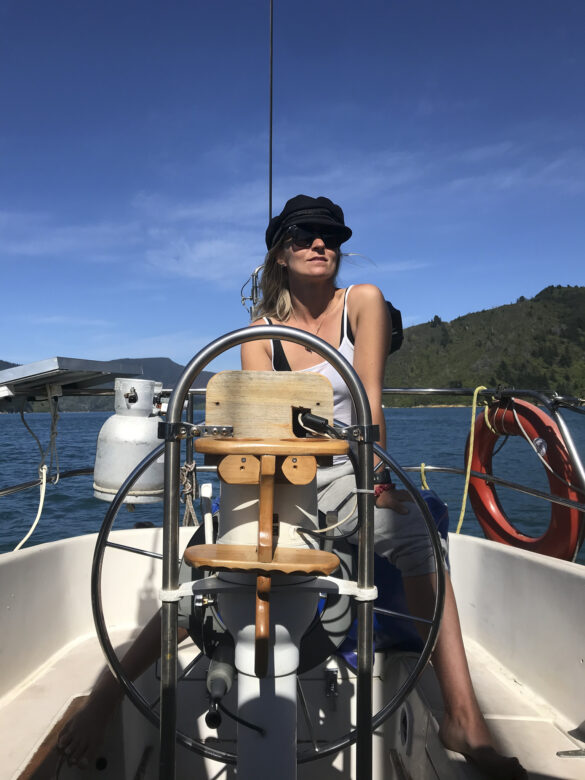 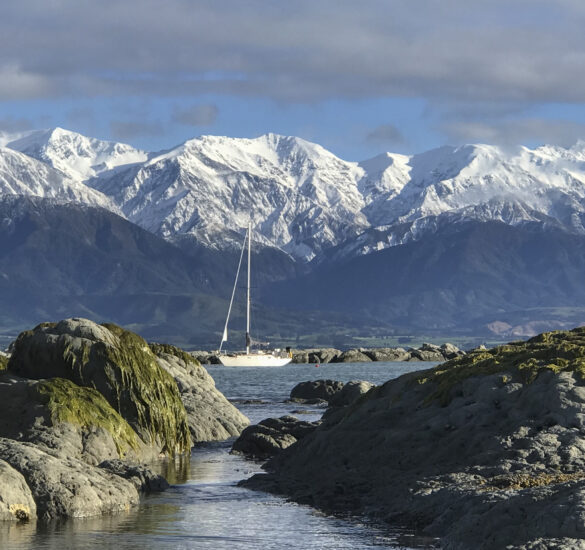 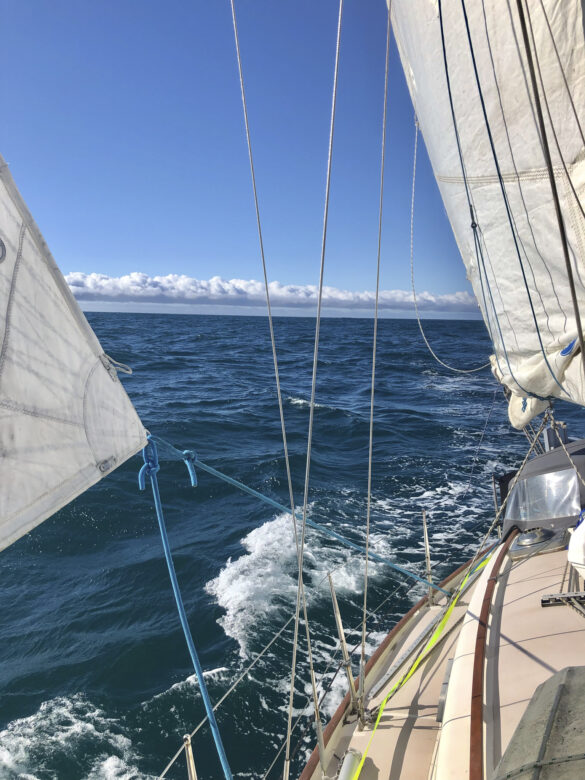 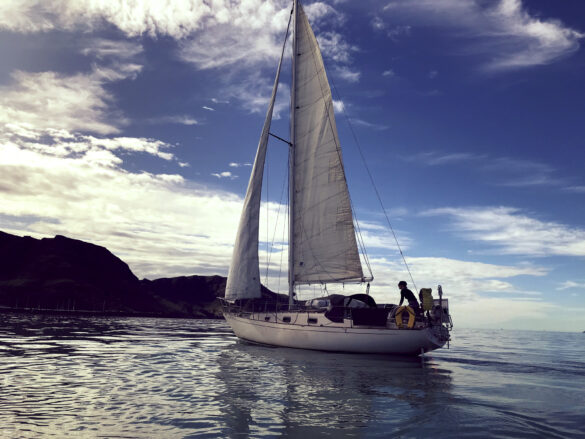 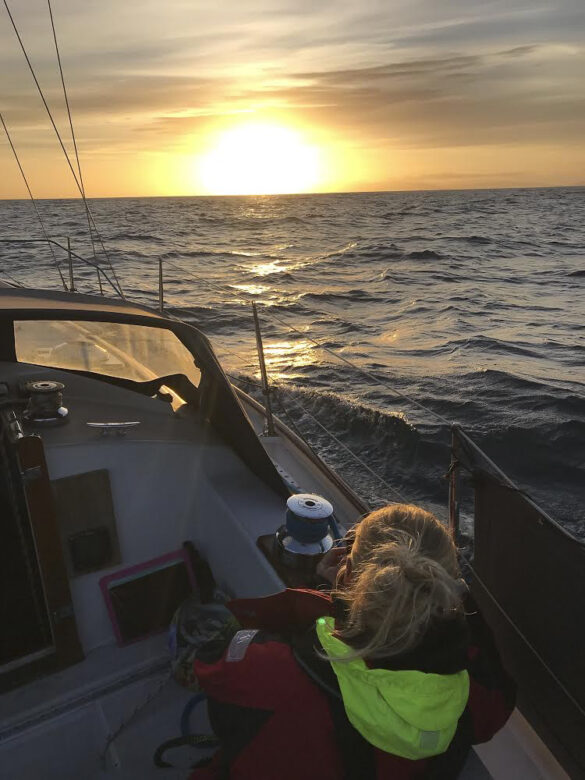 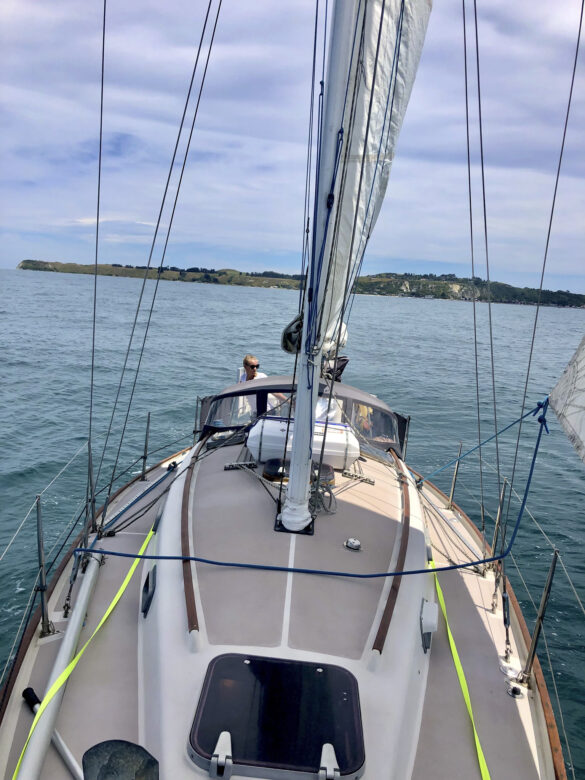 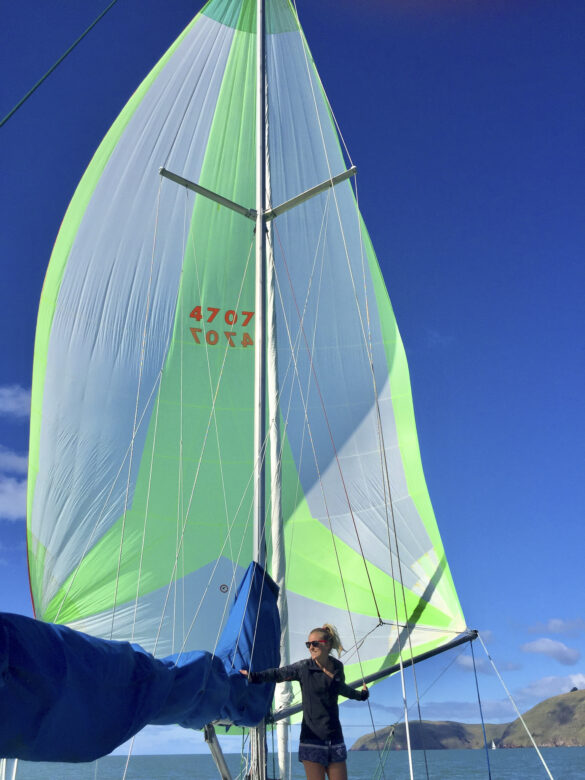 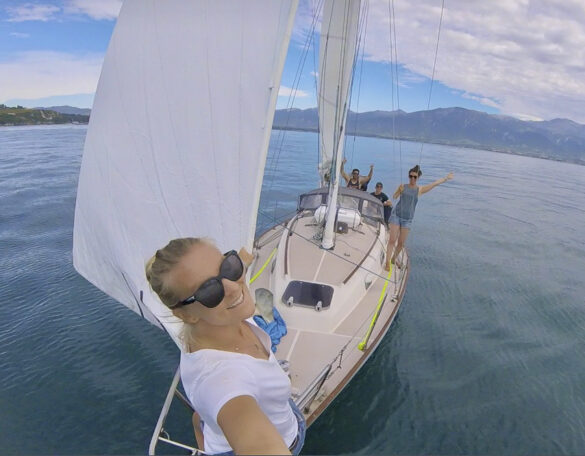 She tells me the Contessa 32 has always been her dream boat.

“The Contessa 32 is a British design,” Lucy explains. “Seaworthy enough for offshore voyages in extreme weather conditions, but also performs well in races.”

The trait most often associated with the Contessa 32 though is its ability to endure harsh weather and rough seas. She is small, simple and has extremely beautiful lines.

“I wanted something small enough to keep her simple and sail solo or shorthanded,” Lucy adds. “The Contessa 32 became even more well-known as it was the only yacht in the small boat class to finish the disastrous 1979 Fastnet race. With circumnavigations and East to West passages past Cape Horn to her name – they are pretty awesome boats.”

“They have been called the sailing submarine more than once,” she laughs.

When I first started to follow Lucy’s progress with Nerissa K she opened my eyes to a world of sailing and surf adventure. But most of the inspiration came from her relationship with her special little boat … and the hours and hours of preparation that seems to foreshadow such adventure.

“I have been preparing her to be safe and ready for offshore sailing,” Lucy tells me. “I do not want to think of the money I have spent to get her up to a very high standard. Boats are not cheap to own or maintain, let alone getting her ready for a solo ocean race. I am being driven by my childhood dream, my love for the ocean, being fully immersed in nature and the sheer challenge.”

I chuckle at her enthusiasm. A few years back Lucy’s husband Al T admitted to me that he wasn’t so keen on boats … or sailing offshore.

“Al is very new to sailing,” Lucy offers. “I started my New Zealand sailing life without him. Sailing is not something he has ever been interested in as he is a surfer through and through. However, after purchasing Nerissa K, my third boat, I took him on his first sail – from Waikawa to Lyttelton – possibly a little ambitious for a first sail. We had 30 knots of wind and a three-metre following sea out of Cook Strait. We had lightning storms through the night as we passed Kaikōura and thick fog through Pegasus Bay. He absolutely loved the adventure. He does not enjoy missing good surf, or lack of headroom in the boat, however he is onboard now more than ever. He has been a fantastic support with this project.”

Lucy always had her heart set on a boat that could be sailed around the world solo. She started off with a couple of smaller boats, “to practice and take steps in this direction”.

“After several years I knew I just needed the right boat for the job,” Lucy confirms. “I have many big dreams and my sailing plans are always changing. This solo race is a huge test and a big goal. After the race, some cruising and surfing in warmer waters … take her to Indo perhaps. I would love to sail her back to my family in England … maybe. There is the definite possibility that I will enter her in another ocean race.”

There is no hard and fast rule as to what it takes to be proficient enough at sailing to undertake a global surf voyage – John John Florence and Torren Martyn proved that you could learn on the job. But that’s not so easy to do out of New Zealand.

“New Zealand has strict rules about heading offshore,” Lucy explains. “You have to be a proficient sailor, with high level qualifications in medic courses and sea survival. And your boat must be up to a very high standard. This is all in the name of safety and I am all for it.”

She said, despite some hardships along the way, she has never considered giving the dream away.

“There have been some incredibly tough times,” Lucy admits. “Being on board after 34 hours of being awake in a lumpy sea can be pretty hard on you. You wonder why on earth you are doing it.”

“My first keeler ended up high and dry on some rocks,” she smiles. “You really know you’re out there doing it when things like that happen. Then there are weeks in the boat yard spending time and money, and an endless job list. It is hard work.”

She said she’d encourage others considering taking on a project like this to “absolutely go for it”.

“It’s a labour of love and the truly wonderful bits far outweigh the difficulties. Life is short and unpredictable.”

Her most terrifying moment out on the ocean took place deep in the South Pacific Ocean.

“We had a capsize at 2am on an Imoca 60 about 200 nautical miles from the Chathams,” Lucy recalls. “There were only two of us onboard … it was terrifying in retrospect. At the time adrenaline keeps you from being too scared. I have yet to encounter a real storm. This will most certainly happen in the Tasman.”

The 2023 Solo Trans-Tasman Yacht Challenge will start on April 9, 2023, but Lucy’s race to get to that start line has already begun.

“I was looking at this race during Covid times,” she reveals. “I had been on the fence for a while because it is not an easy race. The Tasman Sea is a difficult and dangerous sea for sailors. It is notorious for being unpredictable and prone to storms. I decided to go for it as it is a true adventure and a real challenge. The race is contested every four years and it is the second-oldest continuously-run single-handed ocean race in the world. It is also the only race of its kind in the southern hemisphere.”

“I want to push myself to the limit and see how I will cope.”

“I want to push myself to the limit and see how I will cope.”

By her side, helping her in preparation of mind, body and boat is a growing team of experts.

“I have had the most support from Al T since I signed up,” Lucy begins. “Then I have a great sailor friend, John, who has been passing on his wealth of knowledge from his experience. I have been stoked that New Zealand company Back Country Cuisine is providing my yummy meals for the race and Burnsco are helping me out with a few safety items for the boat.”

Lucy said she was on the lookout for a sponsor to help out with the cost of specialised storm equipment … someone who was interested and supports a true adventure. She was also looking for a main sponsor to back her project. She said any help or financial support would be greatly appreciated. Lucy has a Give a Little page set up as well.

Lucy said her goal was to finish the race within the 20 day time limit.

“I am competitive and I would love to do well,” she admits. “However at this stage, I am looking to complete it, keeping myself and my boat safe. I am the only female skipper racing and I would like to represent the wāhine well!”

She admitted her biggest fear was not making the start line, due to her boat not being ready.

“During the race, my main fear is perishing at sea,” Lucy tells me with a straight face. “Many previous competitors suffer hallucinations during this race, this worries me a little.”

“My main fear is perishing at sea. Many previous competitors suffer hallucinations during this race, this worries me a little.”

When she makes it to Australia she plans to go surfing.

“Al T will join me after the race in Australia and we will use Nerissa as our own private surf charter – inviting friends to jump on alone the way.”

She describes sailing as a spiritual adventure in the realm of nature at its rawest.

“When you are out at sea, you connect completely to the natural world. It feels healthy. I want to have a true adventure, like the old sailors I’ve read about.”

You can support Lucy via her Give-A-Little page here.
You can follow Lucy’s progress here.
The race begins April 9, 2023. You can follow the race and track Lucy and her fellow competitors here.