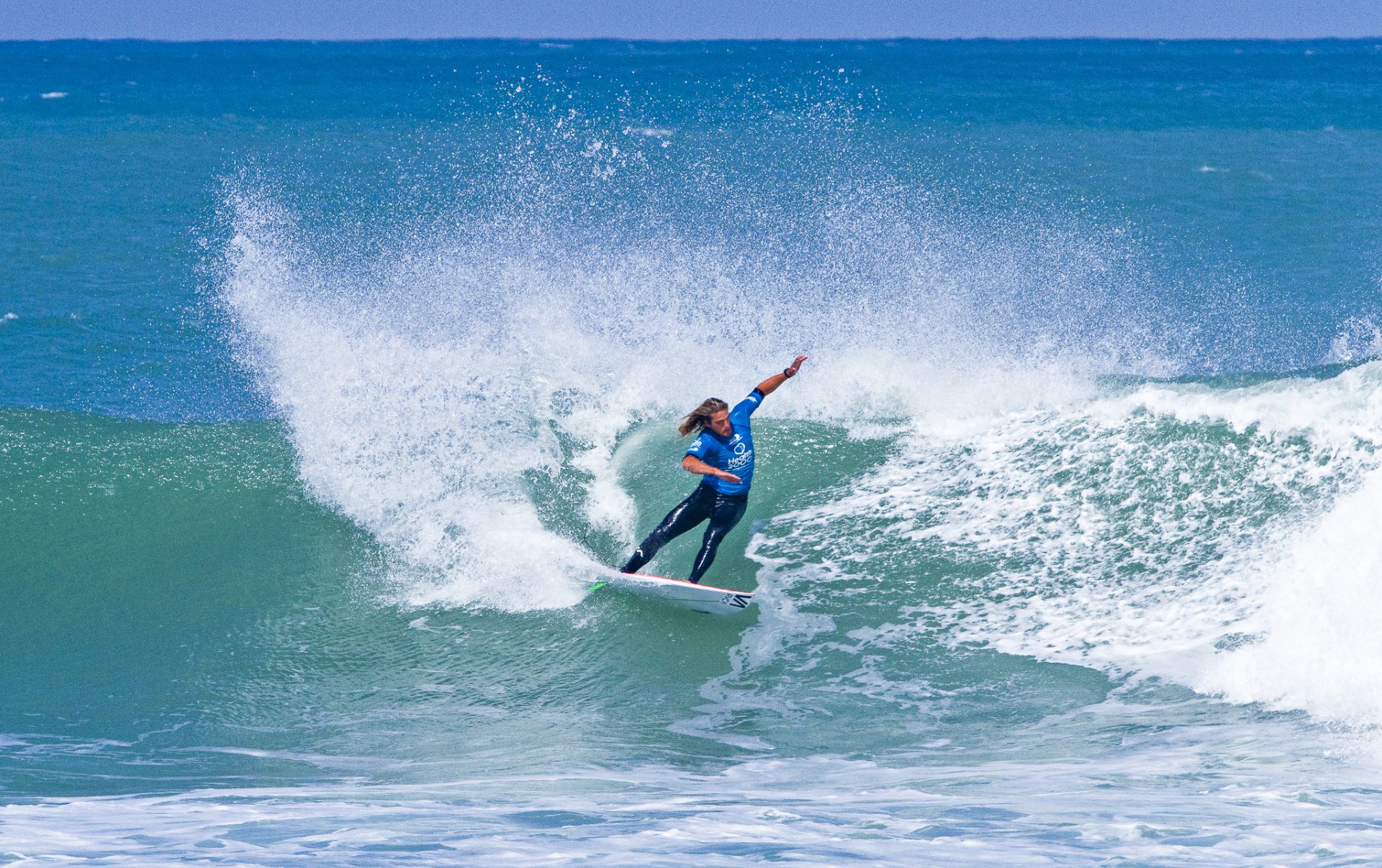 Perfect Taranaki waves laid the platform for New Zealand’s top surfers as the contest whittled down to the semifinalists at the Health 2000 National Surfing Championships held at grunty Stent Road this week. The head-to-head battle between WQS regular Billy Stairmand and good friend and WCT qualifier for 2019, Ricardo Christie, will headline finals day tomorrow.

Few surprises in the Men’s Division with Billy Stairmand (Raglan), Ricardo Christie (Gisborne) and Elliot Paerata-Reid (Piha) advancing through to the semifinals.

The Women’s Division was far from the same with defending champion Raiha Ensor and fellow Mount Maunganui surfer and New Zealand representative, Elin Tawharu, both dumped out of the event in the quarterfinals.

The surf pulsed throughout the morning with the swell building beyond the 2.0m mark with northerly winds offering the best conditions for a domestic event in years.

Chasing a seventh national title at the event Billy Stairmand knows he has to first advance out of the semifinals before a potential finals match up against 2019 World Championship Tour (WCT) surfer Ricardo Christie, among others.

“I’m just really focussed,” offers Billy after posting a 15.94 in his quarterfinal to finish second behind Piha’s Elliot Paerata-Reid, who won with 16.80 points.

“I feel like this year is going to be a good year for me,” continues Billy. “I am fit and healthy, surfing a lot, and feel like I am surfing well. I want to start the year strong, make the final and have a good battle with Ricardo so hope I progress a little bit more.”

“I feel like this year is going to be a good year for me. I am fit and healthy, surfing a lot, and feel like I am surfing well. I want to start the year strong, make the final and have a good battle with Ricardo.”

Elliot finished runner up to Ricardo in 2018 and only one place better will be enough for the young surfer who will again tackle the World Qualifying Series (WQS) in 2019.

Topping the field today was Ricardo posting a 17.1 point heat total in his match up with young Caleb Cutmore (Hamilton) taking second place with 14.10 and making the semifinals.

“Man I was stoked to surf out there, the waves were firing and there were only three other kids out there,” laughs Ricardo after another clinical performance, which he puts down to routine.

“I just keep all heats exactly the same,” he reveals. “What I have learnt, is to do what you usually do whether you are here at the National Champs, at a boardriders comp or competing on the World Tour, I just like to keep it the same.”

Billy, Elliot and Ricardo will be joined by local Taranaki surfers Jarred Hancox and Sean Kettle who won through the tightest match up today eliminating Dune Kennings (Piha) and Luke Kerr (Taranaki).

With defending champion Raiha Ensor out of the Open Women’s Division, the field has opened up with a mix of young and old surfers vying for the final four.

It was another local surfer in Zhana Hutchieson that impressed the judges on her backhand today surfing to a 13.5 point heat total and heat win. Zhana was joined on the winners podium by Laura Griffin (Mount Maunganui) and Saffi Vette (Gisborne).

Saffi took out the first quarterfinal match up along with Grace Spiers (Whangamata) in second, together eliminating Raiha. Saffi’s aggressive approach to the big waves was enough to see her get the nod over her older counterparts.

“What I have learnt, is to do what you usually do whether you are here at the National Champs, at a boardriders comp or competing on the World Tour, I just like to keep it the same.”

Laura was another giant killer, together with Aimee Brown (Great Barrier), putting an end to Elin Tawharu’s chances of a maiden title.

The afternoon was filled with senior divisions where participants relished the chance to taste the power of the waves today.

The Over 30 Men’s Division will be an all Taranaki affair for the final with Bachelor Tipene, Jarred Hancox, Dwaine Mataa and Danny Kaweroa all making the final.

Locals were again in force in the Over 35 Men’s Division with six of eight semifinalists coming from Taranaki. However it was Raglan surfer Chris Malone who shone in the division with a 17.2 point winning heat total.

The match up of the senior divisions came in the Over 40 Men’s Division where Taranaki’s Dwaine Mataa and Manu Schafer surfed to 18 point heat totals to eliminate Chris Malone who himself posted 16.8 points in their heat.

On Thursday two titles were awarded in the junior divisions with the finals of the Under 14 Boys and Girls contested. Navryn Malone (Rag) claimed the Boys Division while Australian-based Amarnie Barber claimed the Girls Division. Malone was the standout surfer in the final running away with a 14.8 point heat total to finish ahead of Ryder Pennington (Taranaki), Tai Erceg-Gray (Whangarei) and Tigher West-Hill (Gisborne) who finished in second through fourth in that order.

The girls final was a little different with Amarnie getting her win by way of Ava Henderson (Christchurch) making a priority error which saw her finish runner up over Anna Brock (Mount Manganui) in third and Asia Braithwaite (Gisborne) in fourth.

Earlier today the Under 18 Boys Division saw two intensely fought semifinals with high scores across the board. Whakatane surfer Jack Lee continued to impress and along with Hamilton’s Caleb Cutmore, they won through the first semifinal at the expense of Taylor O’Leary (Muriwai) and Jacob Saunders (Mount Maunganui).

In the second semifinal, it was the two Tom’s in Robinson (Whangarei) and Carter (Waihi Beach) that overcame Luke Griffin (Mount Maunganui) and Finn Vette (Gisborne) in the battle of the goofy-footers.

It wasn’t all bad for Finn who had earlier advanced through to the final of the Under 16 Boys Division along with Navryn Malone (Raglan), Tom Butland (Taranaki) and Tom Robinson. Robinson will be on double duty for the final day contesting both junior divisions.

The event concludes tomorrow for the finals day of competition with a promising WSW swell peaking at 1.7m at high tide around 2:30pm. The swell will be accompanied by favourably light ESE tending SSW winds in the afternoon.

The Health 2000 National Surfing Championships was last contested in the Taranaki region in 2007 and has been held in the region on nine other occasions. This year’s edition is being hosted by Oakura Boardriders Club.

In the 55 year history of the event the Health 2000 National Surfing Championships has grown to encompass 29 divisions spread across all disciplines and age groups making for a largely inclusive event (330 entries), filled with high-level surfing as well as good times in and out of the water.

The Health 2000 National Surfing Championships forms the first leg of the 2019 New Zealand Surf Series which in turn provides a vital pathway toward the ISA World Surfing Games, a key Olympic qualification event in 2019.

Results From Day 4 of the Health 2000 National Surfing Championships

Watch: Wild Waters, The Fight To Protect The...