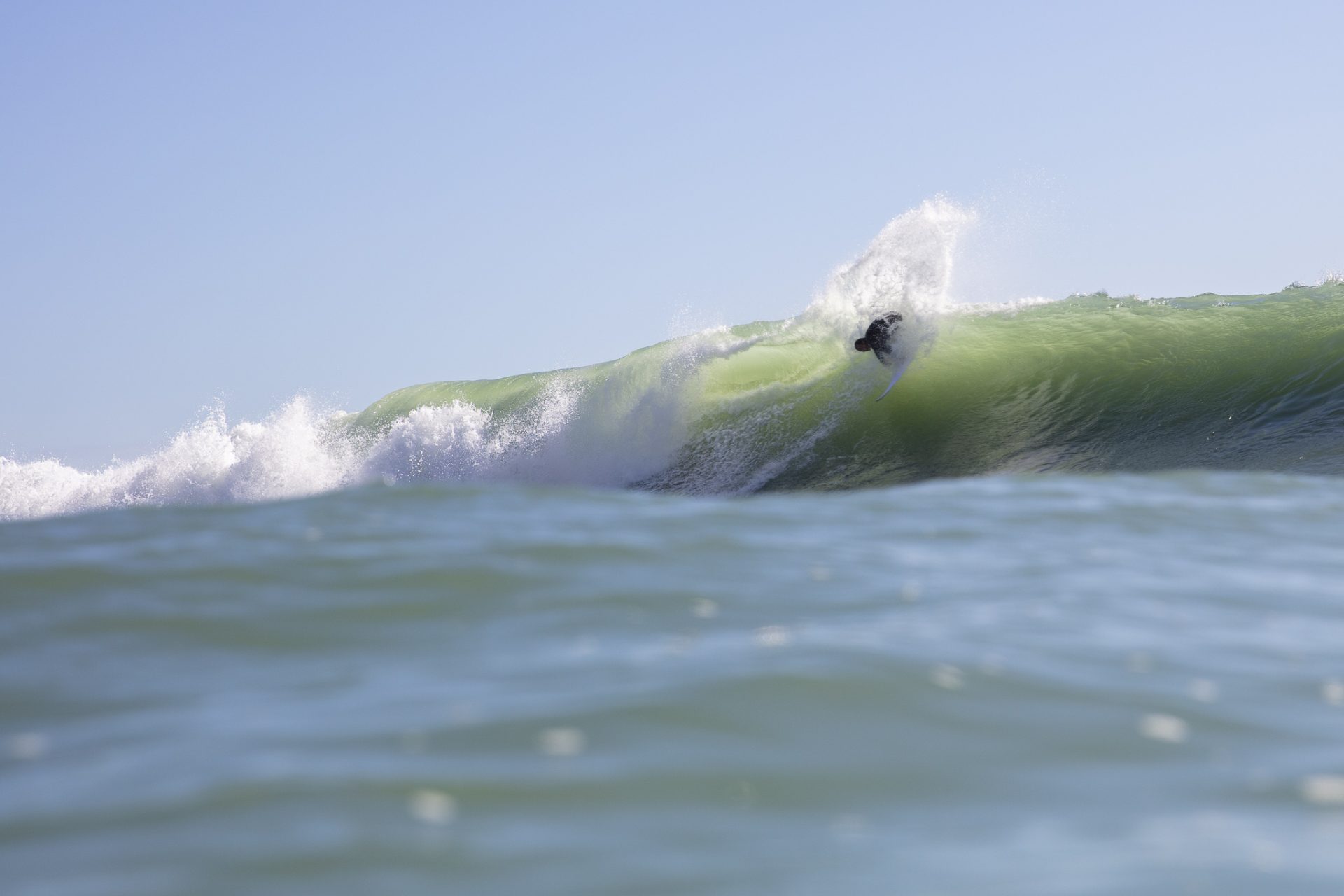 Lockdown forces Raglan surfer Brett Wood to rethink his quiver of international brands. He returns to New Zealand-made boards with the Hughes Surfboards SB19 Custom and opens up a whole new world. His journey may sound familiar to many of us.

It’s 1989. Pottz is the champ and every surf rat in the Far North wants flames painted on the rails of their boxy, volume-packed Col McNeill-shaped Hurley stick.

It all goes wrong for me in 1991 when, at 17 years old, I watch Kelly Slater in Black and White. I spend the next decade and a half riding banana-rockered 18 & ¼” wide 2 & ¼” thick 6-foot 4-inch wafer-thin New Zealand made customs. Like everyone else.

By 2005 I’m living in Raglan and the 6’4″s go okay here as the waves have a bit more push than in most New Zealand locations. But something isn’t quite right. I’m 16 salty years in at age 31 and I can surf okay, but I’m frustrated at my lack of progression – surely I should be ripping after 16 years?

In 2013 I meet an American called Ben who’s moved to Raglan after years living in Hawaii. Ben’s got one of the best styles and techniques I’ve ever seen. And he’s always got the right board for the waves – he buys full quivers five boards at a time.

And so began my straying from New Zealand-made customs. I’ve spent the last seven years riding JS’s from the Goldie (but made in Thailand), Channel Islands from the US, but made who knows where, Webbers, Firewires, Vampirates, T&C’s … you name it, all in the name of finding what works for me.

And it has worked. Along with some technique help from American Ben, Matt Scorringe and Glenn Campbell, working out what boards work for me has paid dividends and I’m surfing better now at age 46 than I ever have.

But as exciting as it has been to ride all these hyped-up big brand mass-produced boards, it’s felt like I’ve been cheating on New Zealand board shapers. The April lockdown drove home to me the importance of supporting local.

“As exciting as it has been to ride all these hyped-up big brand mass-produced boards, it’s felt like I’ve been cheating on New Zealand board shapers. The April lockdown drove home to me the importance of supporting local.”

Before my philandering, I rode the late and great Craig Hughes’s customs for years. So what better place to start than ordering a board from Craig’s eldest son Luke. For those who’ve been living under a rock, Luke Hughes has been a successful competitor since his teen years and remains today one of New Zealand’s best surfers.

A few chats with Luke at his Raglan Surf Co HQ and the order is made for an epoxy 5’9″ long, 19″ wide, 2 & ½” thick Hughes SB19 model with a few extra liters of foam packed in to achieve 28 litres in volume. The aim is to create a board for 3-5 foot Raglan point waves that will paddle well and have an outline that provides drive, hold and speed, but that will also turn square off the bottom and turn sharp and release off the top. And, of course, not bog on flat sections. So basically a magic carpet.

Having gotten used to the instant gratification of buying boards straight off the rack, the wait was excruciating. But I did get to see the board in various states of construction, which was both satisfying and froth-elevating.

Finally the new sled arrives, but the waves are terrible and it doesn’t see the brine for a few weeks. I eventually cave in and take it out in some 2ft wind slop. Having come off JS’s and Channel Islands my expectations from boards are high. The first surf doesn’t go great – although it does feel fast, it feels like there’s too much thickness under my front foot and as the rail line at the back of the board is straighter than what I’m used to it feels like I have to nurse the bottoms turns, which is unnerving.

I remind myself that these aren’t the waves this board is designed for and wait for some actual swell.
Some decent waves arrive, 3-5 foot with some good bowly sections. Now we’re talking – the SB19 feels great from the very first wave. It paddles into waves better than my other 5’9″s and feels fast and sparky underfoot. It’s got a decent amount of nose rocker so I feel confident taking off late on the sets. I sort my feet placement and the bottom turns start to feel natural and have more drive than I’m used to with the straighter rail. But what impresses me most is a burst of speed when in the lip – a bit like a rubber band being stretched and released.

Construction wise, it’s EPS foam with a carbon-roving stringer down the middle of the deck. The bottom has parabolic carbon-roving stringers. I like light boards that are easy to throw around so I specified to Luke to make it light. Luke made an executive decision and glassed it strong, which initially I thought I wouldn’t like but it still came back super light and it’s holding up well to the abuse that Raglan throws at boards.

The Hughes SB19 has become my go to board in good waves … and waves I wouldn’t have thought I’d surf it in. And that’s a good nod to how well this board surfs considering I’ve got a fairly substantial selection of big brand name boards in the shed. They may just get replaced by New Zealand-made customs … 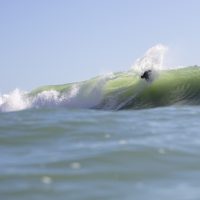 The SB19 is a custom board made by Luke Hughes, of Hughes Surfboards, right here in Raglan. As a custom it's designed for me and the waves I like to surf. It uses epoxy construction with a great deal of technology incorporated to control flex. Two parabolic carbon rovings on the bottom and one on the top all finished with extra strength courtesy of the latest in glassing technology. In 3-5 foot point waves the board is an absolute performer with a surprising springiness to it that helps generate speed quickly. That also makes it even more fun to ride. The Hughes SB19 has become my go-to board in good waves ... and even in waves I wouldn’t have thought I’d surf it in. That’s a good nod to how well this board works – especially when you consider the fact that I’ve got a fairly substantial selection of big brand name boards in the shed. They may just get replaced by New Zealand-made customs if this board is anything to go by. If you're anything like me and feel like it's time to revisit your local shaper, then don't hesitate. Your next world-class custom board may be sitting right under your nose.