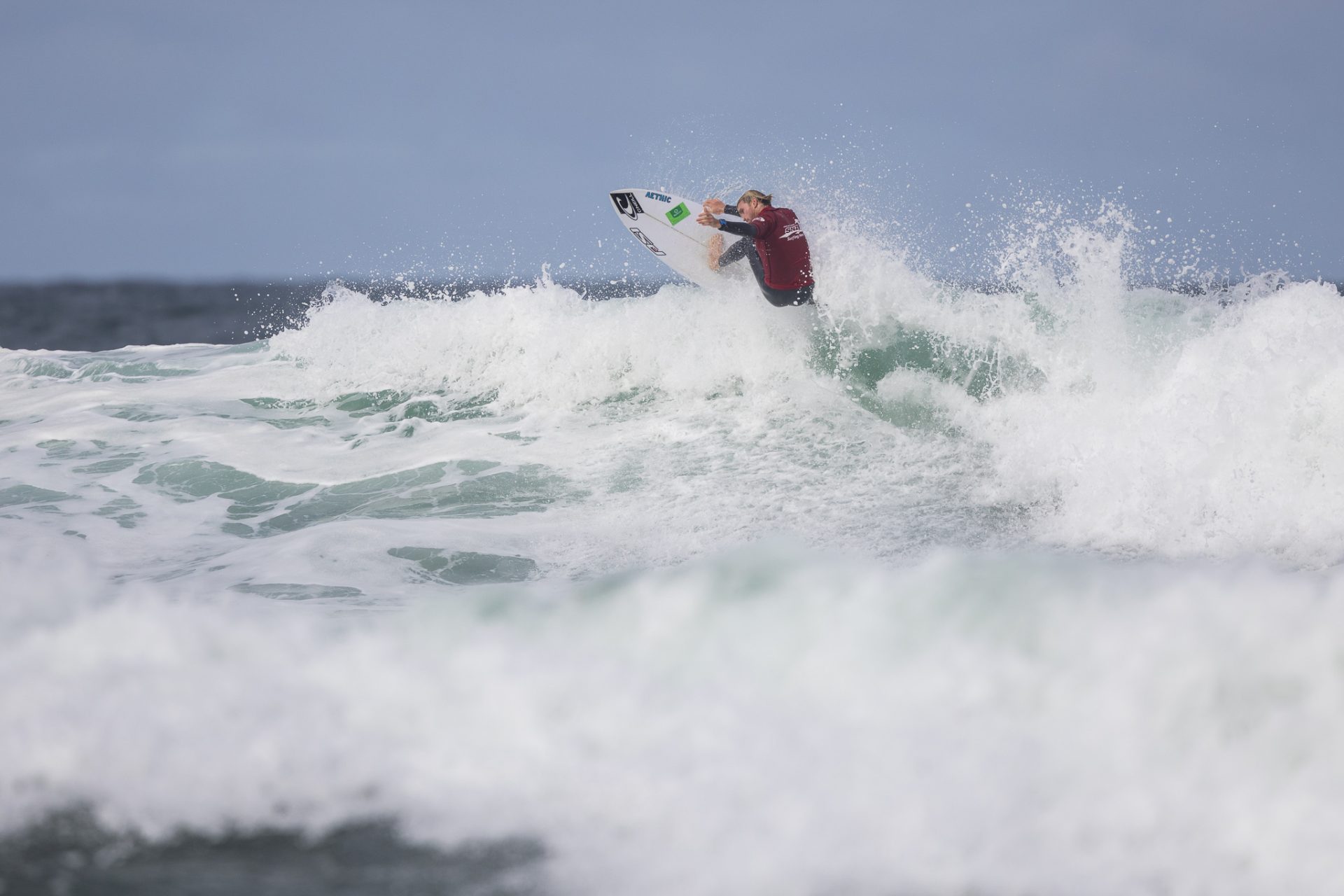 Zen Wallis defends title at the Emerson’s South Island Surfing Championships and claims his second career win on the New Zealand Surf Series. He is joined by 17-year-old Estella Hungerford who wins first ever title in the Open Women’s Division.

Despite a small 1-3 foot swell throughout the three-day event window, the South Island Surf Championships produced contestable conditions right into finals day when the light winds eventually turned onshore. The peaks at St Clair Beach, Dunedin, were challenging and rewarded those surfers who could unlock the onshore puzzle – and it wasn’t always the locals coming up trumps.

The Open Men’s final was a nail-biting affair with Zen Wallis, of Piha, coming out of the gates strong as locals Elliott Brown and Josh Thickpenny struggled to find rhythm. Shane Kraus, also of Piha, started slow, but soon clicked into gear and took the fight to Wallis. The two exchanged set waves while Thickpenny and Brown hunted inside runners. The mixed up lineup didn’t reward them. The sets pushed through the outside bank and produced a string of lefts and rights, delivering Wallis a 14.43 point heat total. Kraus, 19, looked dangerous at times, but his 13.7 wasn’t going to reel in the on-form Wallis. Towards the end of the final Brown finally tapped into his usual form on a long left and posted his best score, but without a back-up he could only manage third. Thickpenny had to settle for fourth. The win makes this Wallis’s second South Island Surfing Championship title in a row.

“I’m so fizzing. I’m absolutely over the moon,” he smiles afterwards. “I don’t feel greedy at all winning two in a row – I really wanted this so bad. That’s a key thing for me – I can get a little bit soft – even in the final there I probably should have shut the door on the guys a bit more. I don’t have it in me to sit on people to stop them catching waves.”

“I came down here after a string of bad results – first and second round knock outs and I told myself I had to turn something around down here. I really connect with the South Island and especially here in Dunedin – I’ve been coming to this event ever since I was a grom and there is just something about it. I even had a feeling that this might happen.”

Wallis said that the Emerson’s South Island Championships were never an easy gig.

“Every single quarterfinal was stacked with past winners of the title getting knocked out,” he explains. “It was gnarly. None of the heats were easy runs – it just shows the talent down here and makes this such a prestigious event to win.”

Wallis started strong in the final and managed to fend off a slow-building attack by his finalists.

“I started with a six and I wanted to better that wave,” he recalls. Then I locked in a seven and was out the back running away with it. If the heat had ended at 20 minutes I would have been set. We had a lull and then I knew there was going to be another set. Shane was sitting wider than me, Elliott was finding his rhythm and I knew it was going down to the wire.”

This result pushes Wallis up nine places to sixth overall on the New Zealand Surf Series.

In the Open Women’s final Estella Hungerford, of Christchurch, was a girl on a mission after falling short in the Under 18 Girl’s Final. She came out firing and used that energy to fuel a powerful attack on the rights off the main peak. Her 11.6 was enough to put clear air between her and second-placed Tash Civil and Shani Ayson, both of Dunedin, who managed to find 7.83 and 7.67 respectively. Anna Hawes, of the West Coast, rounded out the final with 6.43.

“I’m pretty stoked,” Hungerford smiles. “I come here every year and I’ve made the final the past few years, but it has never actually gone my way, so this year I am stoked. The sets were pretty inconsistent, but it was kind of like Brighton today, which is where I surf always – onshore and a bit crappy. It was pretty fun on the set waves. I like surfing my backhand, so I was looking for the rights. It wasn’t typical Dunedin waves, but it is always fun down here and being right on the waterfront here makes it a pretty unique venue.”

Hungerford is the older step-sister of Ava Henderson who, at 13, is proving to be a force to be reckoned with.

“We definitely have some rivalry in the family,” she laughs. “Ava is getting really good. We started surfing at the same time when our parents got together and so we definitely push each other – it’s really good.”

Hungerford said she hadn’t had the best season this year.

“I’ve made finals, but haven’t pulled it together in the end,” she admits. “You always learn more from your losses, but I am pretty stoked to finally win one.”

Wallis was again in action in the Men’s Longboard Division, but this time could not produce a winning performance finishing second to the defending champion Hugh Ritchie, of Christchurch. Ritchie finished with an 11.6 point heat total, less than a point clear of Wallis with Stephen Lee, of the West Coast, finishing in third and Nick Black, of Christchurch, in fourth.

Almost 200 entries were received with the vast majority coming from the South Island surfing community eager to contest the southern-most nationally sanctioned event.

The event was hosted by the South Coast Boardriders and was dual sanctioned by Surfing New Zealand and the South Island Surfing Association.

The Emerson’s South Island Surfing Championships is the fourth of seven events on the 2019 New Zealand Surf Series. See below for remaining events: