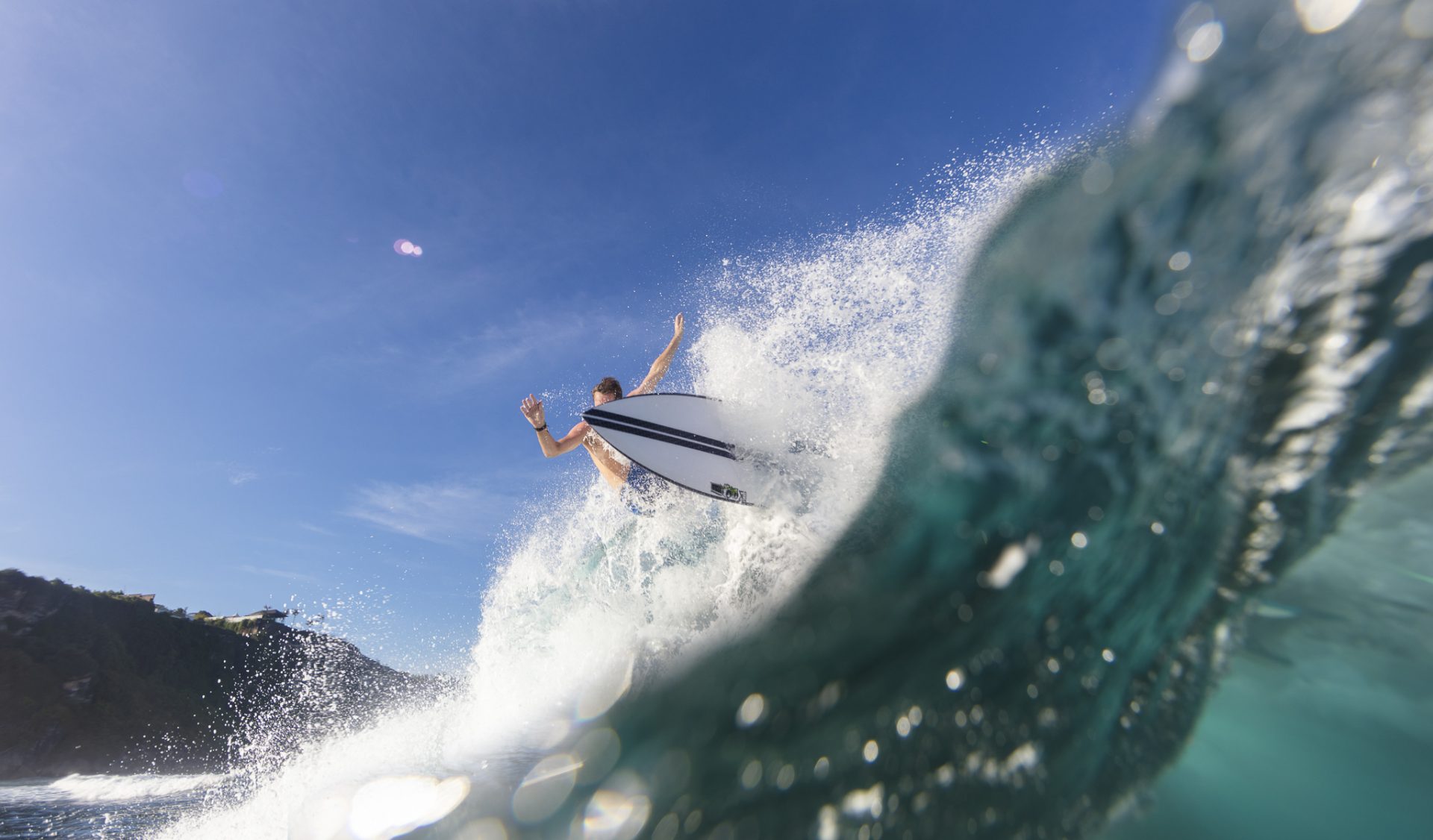 The offshore breezes first return to the Bukit Peninsula in Bali’s southernmost regions each April stirring the sleepy walls of Uluwatu back to life. It’s the perfect time to indulge in a tonic of glassy waves, warm water, icy cold berry bowls and sunset sessions. This is a ritual I could get used to.

To be completely honest, I’m a rookie when it comes to Bali. Luckily, my travel partner Lyndon Fairbairn has been here more times than he’s had nasi gorengs. And he knows his way around the waves just as effortlessly as he knows how to guide his scooter through the mad Bali streets on the way toward Uluwatu.

The Bukit is a limestone peninsula that was cracked wide open for surf travel when filmmaker Albert Falzon visited for a section of his 1971 surf film Morning of the Earth. From that day it has become a focal point and a seasonal pilgrimage for surfers throughout the world.

Lyndon and I had made an Uluwatu surf strike mission a stop-off on the way back from some filming work in Singapore. One day earlier we had left the harmonious society of Singapore, where order and conformity ruled, only to discover that Bali is the polar opposite. There are very few rules, apart from a couple that carry the death penalty. It’s chaotic and scrambled. It’s beautiful and chaotic. It’s completely in harmony.

There are very few rules, apart from a couple that carry the death penalty. It’s chaotic and scrambled. It’s beautiful and chaotic. It’s completely in harmony.

We’re here in the off-season (the season kicks in fully from June-September), which would normally mean less crowds, but with a small, less than 1m, southwest swell slapping Bali like a soggy towel, there aren’t many places to surf. Uluwatu sticks out far enough to salvage even the most woeful swell. The only problem is the concentration of surfers who would normally be absorbed into 7, 8 or 10 spots along the coast.

Don’t get me wrong, even with an underwhelming swell, Ulu’s is still a lot of fun. The outside section is called Temples – a racy left that delivers, but not really so reliable in a small swell. Then in the middle you have Peaks – a worthy place to snag a bomb, if you’re lucky, with lefts and a mostly unattended right. Further down the point you’ll find Racetracks, one of the better-shaped waves on the Uluwatu menu.

An Ulus surf starts with a walk down a cliff face terraced with restaurants, surf shops and Uluwatu industry. By the time you reach the cave you’re ready to start paddling out across the shallow reef and into the lineup. The warm water (30°C) is some kind of bliss after thickening our blood in New Zealand’s chilly climate. The crowd is a mixture of abilities with people from throughout the world, but it is the locals who have this place wired.

Usman Trikoko is one of Bali’s top surfers and his reading of the breaks is akin to a needle reading the grooves on a record. He leads the charge followed by an international cast of out of season “could have made the tour” almost pros. They’re impressive to watch. No competition pressure, just coil and unleash.

Usman reads the breaks like a needle reads the grooves on a record. He leads the charge followed by an international cast of “could have made the tour” almost pros.

There is very little etiquette in the water, although dropping in on the locals is an absolute no-go area. Dropping in and snaking everyone else seems to be fine (believe me, it’s not when you’re on the receiving end).

As chaotic as the lineup is there is beauty in the warm water, sunny skies and charm that Bali just dishes up in spades. It has changed a lot in the almost 50 years since Albert Falzon shot his Morning of the Earth sequences, but Uluwatu still has a beating heart of gold.

I thought the days when I could surf three times in a single day were well and truly over. But here, in Uluwatu, free from family and work commitments, living daily in just a pair of boardies, that seems a logical and manageable choice. Lyndon has the same mindset. So we wind the clock back – reconnect with our youth surfing days, harness every scrap of energy from our 40+ year old bodies and begin to make the most of a week in Ulus.

Each morning we wake at 5:30am as if the swell has jumped and we’re 15 again. We eat a rushed brekky of bananas and muesli, chuck the boards in their slings and jump on our Harley’s (scooters).

We’re down the road to Uluwatu before the parking attendants had even thought of waking up to charge us 5000 Rupiah each … that’s about 50c. We’d get the number 1 and 2 parks, validation that we’re on the pulse. The place is deserted. Then we run down past the Single Fin in the darkness with ears trained to listen for the crack of a new swell. It never comes. Instead the familiar lazy souwest swell rumbles lazily down the reef.

It doesn’t faze us … as long as we are first out we’re happy. Usually we are and we get half an hour of waves before the sun breaks the horizon. Then the slowly increasing crowds ramp up and up until the lineup is packed. That is our cue to head in for a second breakfast at Salin Warung served by Jessica and her team.

There we eat overlooking the lineup and try desperately to rehydrate. From our vantage point on the cliff we study the ebb and flow of the crowd to pinpoint our second surf between surges in the crowd. Sometimes we get it pretty good. Sometimes we strike rush hour. The second surf will drag on for anything from two to four hours in the heat of the sun. We pay for that. Sunburnt, heat stroke among the penalties. There is nowhere to hide from the sun and we’re oblivious as we try to pick off set waves to ourselves in this tropical paradise.

We never leave much in the tank. We come in from the second surf with legs that feel like lead as we climb up the irregular steps of the cliff face. Our Harley’s are now swamped in a sea of bikes. We struggle to locate them at times. Our next stop is nearly always Drifters – a café on the turn off to Bingin that serves an icy cold berry bowl for 85,000 Rupiah that is an incredible reviving tonic. We usually tack a late lunch on a short time later and congratulate ourselves on refueling so well.

The afternoon crowds never get any ligther and so we vow to repeat the early session in the morning as we recount the day in the company of a bottle of Bingtang while floating around the pool at our accommodation, Uluwatu Breeze Villas.

Watching the sunset is the thing to do in Uluwatu, so we head down to the beach clubs: Single Fin, Ulu Cliffhouse, Omnia or El Kabron (which was currently undergoing a refit ahead of the season).

Beach clubs are another world in Uluwatu – bars and restaurants, usually with an infinity pool, that overlook the lineup, like Single Fin, or at least the Indian Ocean like the others. They’re brimming with the most beautiful people in Uluwatu, a pretty amazing DJ is on the decks and the party ramps up into sunset.

And then, as quickly as it all starts, it is over. We ride the Harley’s back to the villas and are sound asleep by 8:30pm. Exhausted. Recharging to repeat it all again the next day. And we do, without missing a single step. The perfect tonic.

Lyndon Fairbairn making the most of conditions.

View from the Single Fin at dusk.

Still plenty of these.

Down the Uluwatu cliff.

Lyndon Fairbairn on the dawn patrol.

Cracking it from beneath.

Moto: good to see another swimmer.

Bomb set at a secret beachie.