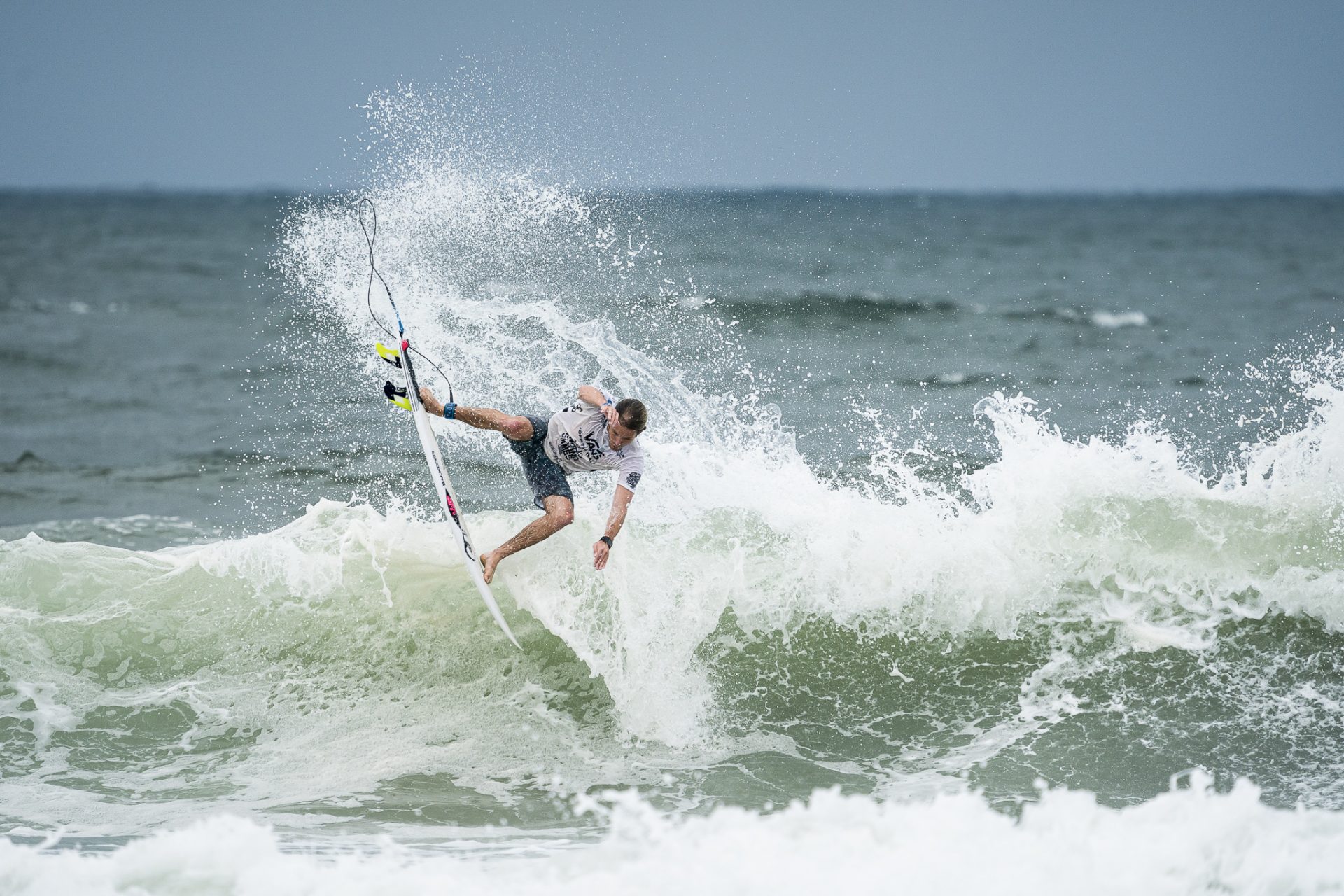 Raglan’s Billy Stairmand has maintained his blistering form at the ISA World Surfing Games in Japan today. His run saw him secure the Oceania qualification slot on Friday. Today he blazed through Repechage heats to put himself into the frame for gold when the event resumes tomorrow.

Stairmand will surf for gold at the ISA World Surfing Games tomorrow (Sunday 15th September) after successfully tackling typhoon waves, and his opponents, on the penultimate day of the event held today.

With today’s performance Stairmand has helped the New Zealand team jump up to fourth overall at the head of a tight chasing group of six nations. Brazil currently leads the rankings over USA and Japan.

A day earlier Stairmand became the second Kiwi surfer to claim an Oceania slot for the Tokyo 2020 Olympics joining Ella Williams who earlier in the week claimed the women’s Oceania slot.

“I didn’t want to know about the Olympics stuff and I didn’t go on the internet or anything,” admitted Stairmand after receiving the qualification announcement on Friday. “I just wanted to keep making heats and worry about it later. People were asking and interviewers were saying things, but I just had my head down and did my job. But now I am pretty freaking stoked, aye. I honestly can’t believe it. It’s been a huge day and I’m still trying to wind down. This is a dream come true and I cannot wait for the future. But, I still have a job to do and that is to finish this completion strong.”

“I didn’t want to know about the Olympics stuff and I didn’t go on the internet or anything. I just wanted to keep making heats and worry about it later. People were asking and interviewers were saying things, but I just had my head down and did my job.”

“I’m so tuckered out. A long day at the beach and I surfed five heats, giving it my all in every single one,” Stairmand offers.

“I knew it was gonna be a big day so I was prepared with food and lots of water,” he reveals. “Every heat I’d make I’d have to forget about it then focus on the next one. To be honest it’s all kind of a blur except for the last heat. That one was the one I really wanted to win. I was telling myself, one more, just one more, and it happened.”

Stairmand started the day on Friday with teammates Ricardo Christie, of Mahia, and Kehu Butler, of Mount Maunganui, alive in the event as they went about their work progressing through the early rounds. Ricardo was the first to succumb to opposition losing the closest of heats by 0.07 in Repechage Round 4 finishing 37th overall.

Ricardo entered the sudden death Repechage rounds after Round 2. He then went 1-1-3 exiting in Repechage Round 4.

Butler found a better rhythm and went round-for-round with Stairmand with the two surfers knocking off the first goal of reaching the top 30 and cut off for Tokyo 2020. Like Christie, Butler entered the Repechage rounds after Round 2, but then went 1-2-2-1-2-3, exiting in Repechage Round 7. He finished the event in 19th overall, relinquishing the top Oceania slot to Stairmand.

“Competing five times today was full-on and pretty hectic,” offers Butler. “The body is definitely feeling it this arvo, but that is just the way the cookie crumbles.”

Butler is the youngest surfer in the New Zealand team at 19 years of age.

“I was just wanting to make heats and make my family and friends proud back home,” he adds. “But it was cool to have me and Bill make heaps. Ricardo and Billy are always pushing my surfing, so being here it has been awesome.”

“I’ll be taking away a lot of positives from the event, learning heaps off the boys and my performance in my last heat. I’ll definitely try and come back next year and go for it again. I love wearing the black jersey and representing my country. And I know the whanau are always proud every time I do the haka, too.”

“I’ll be taking away a lot of positives from the event, learning heaps off the boys and my performance in my last heat,” he acknowledges. “I’ll definitely try and come back next year and go for it again. I love wearing the black jersey and representing my country. And I know the whanau are always proud every time I do the haka, too.”

Stairmand, on the other hand, entered the Repechage rounds after Round 3 and then got his rhythm going with a 2-1-1-1-1-2 defeating Michael February in Repechage 7 and then Filipe Toledo in Repechage 8. When competition resumes tomorrow he will meet Felipe Toledo for the second time.

“Today was a totally different playing field to yesterday, they were both tough, but in their own way, my mind frame was the same though,” admits Stairmand, who changed equipment to the Sharp Eye HT model to cater for the extra power in the waves. “I went for a free-surf on it in the morning and got a good one so was feeling pretty good,” he added about the equipment change.

“Nothing changes for me tomorrow. I’ve still got the same goals, same mind frame, my equipment is on point and support crew is in full force. So, I’m ready for a huge finals day. Bring it on.”

After securing the Oceania qualifying slot yesterday, Stairmand struggled to get a decent sleep ahead of competition today. It didn’t seem to take his edge off.

“I didn’t really sleep last night after everything that went on, but knew I had to just relax and reset,” he reveals. “My strategy didn’t really change. I just wanna smash every heat and go as hard as I can and give it my all. So, I did that and it paid off.”

Another Kiwi competing at the ISA World Surfing Games under a Great Britain flag is Gisborne’s Jay Quinn. Maz’s younger brother is a long time WQS campaigner and now resides in the UK. He’s the current Welsh Surfing Champion and the 2018 British Surfing Champion and is a leading contender to compete for Britain in Tokyo 2020.

At Miyazaki, Japan over the past two days he showed he is well on form. Quinn dominated his early rounds until meeting Kelly Slater and Frederico Morais in Round 4. He entered Repechage Round 6 and went 1-4 exiting in Repechage 7 alongside Kehu Butler.

Tomorrow, Stairmand will face off against Filipe Toledo for a second time along with Morocco’s Ramzi Boukhiam, himself a continental Olympic qualifier for Africa. That will be the first of up to three heats required for Stairmand to advance to the grand-final.

“Nothing changes for me tomorrow,” shares Stairmand. “I’ve still got the same goals, same mind frame, my equipment is on point and support crew is in full force. So, I’m ready for a huge finals day. Bring it on.”