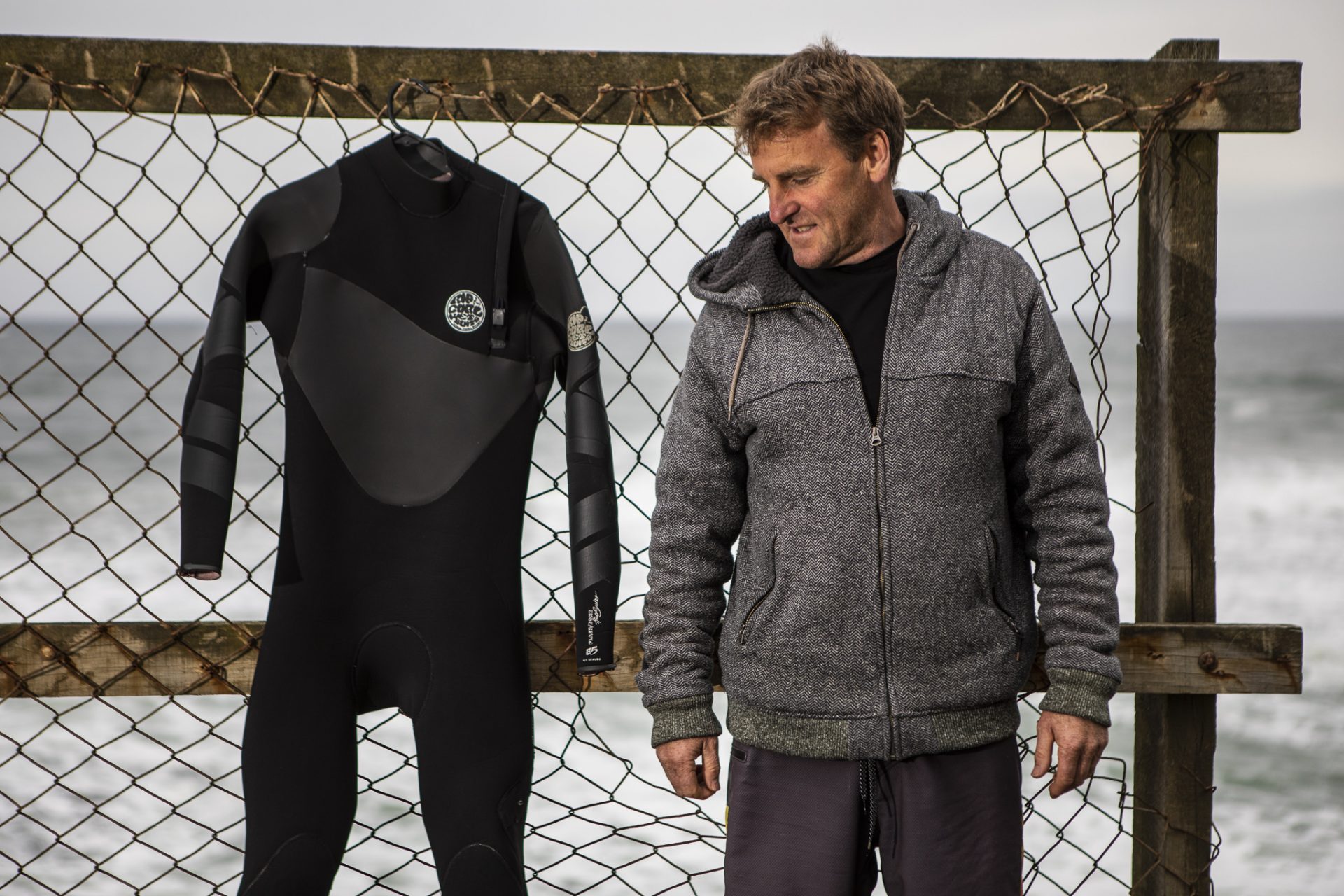 At the start of 2019 Rip Curl launched an all-new wetsuit aimed straight at the top end of the market and billed to incorporate technology that would change the wetsuit game forever. We got our hands on a Flashbomb Heat Seeker 4:3 and thrashed it to death. Here’s what we can tell you after 300 surfs …

Part-Time Pete can’t tell us how he got the nickname Part-Time Pete. He reckons it’s either because he surfs part-time or works part-time. He’s a St Clair local in Dunedin and prides himself on surfing as much as possible. He doesn’t wear shoes. He’s almost 56 with a wife and two sons. He trained as an engineer and works contract work … reluctantly.

He took possession of his Rip Curl Flashbomb Heat Seeker in April this year and was the perfect person to test it for us. He aims to surf twice a day and usually decides when he’s out there whether he’s going to have one long surf or two short ones – if he gets cold he’ll opt for two. If it’s a North swell, then it’s usually one – coordinated with the tides – and then he’ll surf for four or five hours. Yep, Pete’s the guy everyone is envious of.

His philosophy is simple – he enjoys surfing so likes to be as comfortable as possible. That’s what appealed to him about the Heat Seeker when his local water temperatures swing between 8-14°C. He’d come off a run of failures with other brands so was coming back to Rip Curl.

Rip Curl’s Heat Seeker is marketed as having a Flex Energy lining that actually heats up as you paddle. According to the marketing line: “Flex Energy is a revolutionary neoprene lining that generates heat when stretched. As you move through the water, the Flex Energy activates and heats the wetsuit while you move. If you stay active, you stay warm”.

Trying to test Flex Energy is far from easy. We can’t say there is any immediate impact from the technology used in the lining, but certainly this is an incredibly warm wetsuit. It’s a 4:3 and easily capable of getting Part-Time Pete through a Dunedin winter.

In theory, the more you move, the warmer it gets – no surprises there. Pete didn’t go any deeper into thinking about it than that. He’s experienced failures in all the other makes he has tried and for his body shape Rip Curl is the most comfortable by far. It was an easy choice for him.

“You have to look down to see if you’ve got it on, that’s how comfy they are,” he admits. “Other ones are tight around the chest and the whole time you’re out there, you know you’re wearing them. You can forget you are wearing this suit. Whether you need to go thinner for summer, I don’t know – it just feels so flexible – I don’t feel restricted in any way.”

Pete said the Heat Seeker felt amazing to wear from his very first time, but his prolific surf lifestyle had taken its toll on the suit.

“As soon as you put it on it feels like you’ve already worn it,” he explains. “I’ve had the suit for five months now and I’d say I’ve finally worn it out. It’s leaking in the back of the shoulders, which you’d expect for the amount of hours surfing I have done.”

“It’s also got a failure on the inside: the tape around the crotch has actually come away,” he explains. “I think that is a manufacturing fault. I don’t pee in my wetsuit – well, maybe three or four times since I have owned it – it’s not always possible to avoid it but, generally, I don’t pee in it. If I do then I definitely wash it out.”

Pete adopts an engineer’s wetsuit-drying regime that includes a cold water rinse nearly every time and drying in a spot shielded from the sun.

He points out a small tear under the left arm.

“To me that’s, that’s worn out,” Pete shares. “That’s probably equivalent to a normal person surfing for two years or something.”

Roughly, we estimate Pete has had 300 surfs in it, which most people would be struggling to do in any season. With his frequency and time in the water Pete reckons he couldn’t expect to get more than eight months from a high-end wetsuit.

“I think eight months is fair,” he adds. “But there’s a warranty for a year. I don’t know if that’s for legal reasons or whatever, but it’s possibly a wee bit long for surfers like me.”

The zip-free Heat Seeker features an elastic cord to cinch the shoulder shut. It uses a plastic clasp – often a point of weakness on zip-free models.

“This one works perfectly,” Pete reveals. “I’ve had other ones break in the past, but not a Rip Curl one. You don’t have to pull that clasp tight – I’d imagine you could break that if you did pull it tight. But that’s about knowing how to use it.”

The Heat Seeker is very easy to get into and out of – to the point where Pete thought they could almost close the entry gap even further.

“Initially I had trouble getting into them, but that was me,” he notes. “I’ve been doing a heap of yoga and now I find it really, really easy. I think it’s flexibility – mine and the wetsuit’s.”

Pete’s Heat Seeker is a large and on the Rip Curl size charts that’s apparently slightly big for him, but if he went down a size, which still fits, he was worried it would probably last three weeks, not five months.

In the water the Heat Seeker would only occasionally cop a neck flush. The wetsuit features cuffs designed to prevent arm and leg flushes and these work well.

The main area of failure ended up being where the tape was coming away from the crotch area. The tape was slowly peeling from new. Pete thinks it is a manufacturing fault where they didn’t seal the end of the tape properly.

“You buy it to use it, so you don’t want to send it back that first week for something you think might be alright. But it just gradually got worse.”

Once the tape started to unravel he immediately decided to do something about it.

“It’s pretty unpleasant when the water comes up around your kidneys,” he explains. “Suddenly you realise you’re actually very cold.”

Despite its eventual failure, Pete still describes it as “the best wetsuit that I have owned”. Unfortunately, he’s just worn it out after 300 surfs.

It’s not an inexpensive wetsuit, but Pete reckons it’s still very good value for money considering the warmth, comfort and flexibility of the wetsuit.

“If you compare it to other sports and the fact that they do take returns and you get exactly what you ask for, then it’s a fair price,” he offers. “I know it’s not easy to manufacture a wetsuit. And, yes, there’s certainly a markup through retail, but everyone’s got to eat. I think it’s fair.”

He said performance-wise the fact the suit had no restrictions when paddling or surfing, meant it was hard to fault. It is a 4:3, but feels much lighter to surf in.

There is no question it continues with Rip Curl’s understated design and looks pretty sharp. The seam junctions and panel treatments are great, but the hole in the shoulders and signs of fatigue in other places means Rip Curl still has some work to do to make it even better. Its build quality score is also room for improvement – mainly for the failure on the taping around the crotch on the inside.

Rip Curl has long been a leader in wetsuit technology and the Heat Seeker’s lining may have a large dose of marketing fluff attached to it, but you can’t deny its warmth, comfort and flexibility. What else could you want in a winter suit? We reckon they’re on the right track with just a few small kinks to be ironed out. 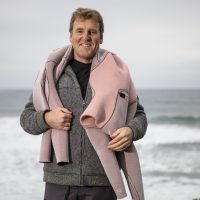 In summary, this is an exceptional wetsuit that marries warmth with flexibility to ensure an enhanced winter surf experience. Yes, we may have worn it out, but 300 surfs is a pretty decent innings for any wetsuit. In waves that are too cold for most, would you pay $2:50 to be supremely comfortable each session? It seems like a no-brainer, and for those dedicated to surfing as much as Part-Time Pete, this is a stellar option. Does the technology do what it says? Well, really it's basic physics. Friction creates heat and the myriad materials used as linings these days could all make the same claim. In the end Rip Curl is an exceptional marketer and has put a name to its lining that resonates with those who live in cold water climates. Our test is not so much about getting to the 300-surf mark, and the end of this suit's life, but about the quality of the experience throughout that journey. And that's why we'll buy another.