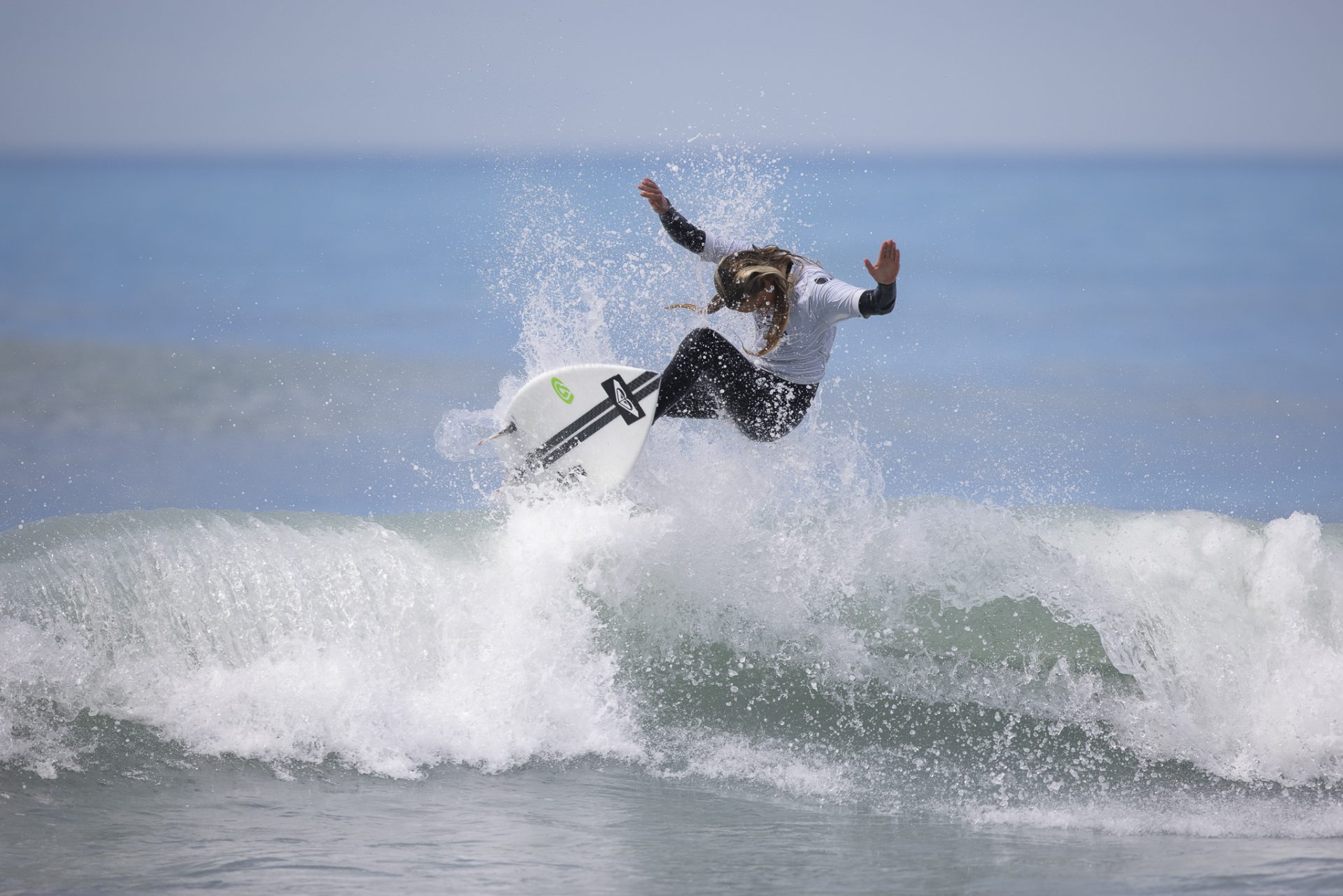 The Kaikoura Grom Comp concluded the South Island Grom Series this weekend with the junior event attracting a huge field of surfers and bringing together families from throughout New Zealand.

The solid swell that ran up the coast all week finally dissipated overnight leaving only a small swell of under 1m to start the event. However, under sunny skies and barely a breath of wind, conditions were great over the low tide during the middle of the day. Two arenas were contested to progress through the preliminary rounds and set up the final day of action on Sunday.

Unfortunately the swell dropped completely overnight to less than 30cm, wiping out any chance of competition concluding. In a rarity for South Island surfing contests, and after assessing the conditions at several nearby back-up options, the call was made to cancel the remainder of the event.

Placings were worked out on heat scores based off Saturday’s results.

Southerwood posted the highest heat score of the day on the main podium – 16.17 points out of a total of 20.

“I haven’t surfed a heat in quite a few months,” Southerwood admitted. “I had jitters all last night and even the week leading into this event, but as soon as I got my first wave, it all went away.”

“I am pretty focused on this event and trying to finish the grom series on a high then go straight into the Scholastics and do my best. I just want to surf as many heats as I can while I am down here”.

Southerwood was joined by his Bay of Plenty Scholastics team mates Jack Hinton and Jacob Saunders who also advanced through their heats while Dunedin’s Luke Rogers and James Millar (Chch) took wins for the South Island.

Late in the day with the tide pushing in, it was decided to hold off the quarterfinals of the Under 18 Boys Division.

The South Island grommets dominated the Under 16 Boys Division with James Millar (Chch), Jai Oakley (Chch), Tyler Perry (Kaik), Jack McKenzie (Chch) and Tom Robertson (Chch) all winning their heats to advance through to the quarterfinals. McKenzie top scored in the round with an 11.7 point heat total.

Ava Henderson carried out double duty in the Under 18s and 16s with the highest heat totals of the girls as she advanced through to the semi-finals.

“The surf isn’t too bad, it has a bit of power and being from Christchurch, you are used to this stuff,” said Henderson. “I have enjoyed watching the girls heats today, too. Leia Millar has been surfing really well and Liv Haysom smashed her heat too, plus heaps of others did really well.”

Henderson was followed closely by Natasha Gouldsbury (Tara) who also had two wins. Both surfers will be eyeing this event as a build up to the Scholastic Championships taking place the following week.

On the second podium, the Under 14 and Under 12 Divisions progressed through a number of heats with the conditions much more suited to the lightweights.

Christchurch surfer Benji Lowen continued his good form with a 16.67 point heat total in the Under 12 Boys Division. Lowen is fresh off a win in the Primary School Championships last weekend and his small wave flare stood out in today’s conditions. Lowen was joined Sonny Lyons (Kaik), Indica Corcoran (Mnt) and Sev Tolhurst as winners in the first round.

Auckland’s Leia Millar advanced through the early rounds of the Under 14 Girls Division with some impressive surfing. One of her top rivals, and current rankings leader, Chloe Groube also advanced with the Pauanui surfer and her sister, Lola, impressing in the Under 12 Division also.

The event continued to roll through rounds late into the afternoon in a bid to get through to the semi-finals of every division for the final day.   The final heats ran frighteningly close to the rocky shoreline.

The 2020 edition of the Kaikoura Grom Comp would not be possible without the support of You Travel Ferrymead, South Island Surfing Association and Kaikoura Boardriders. 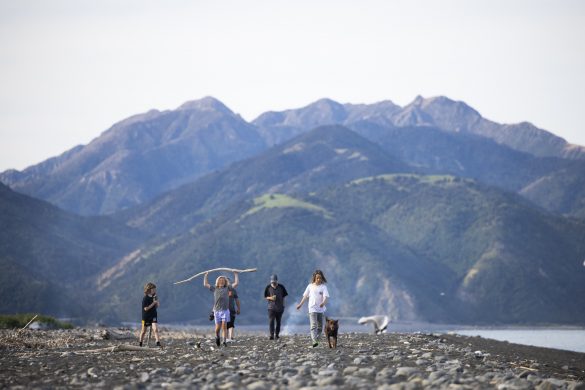 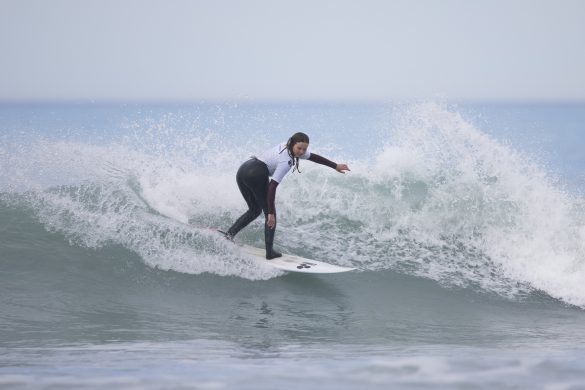 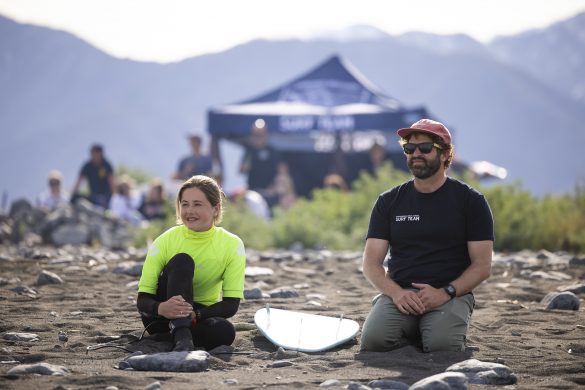 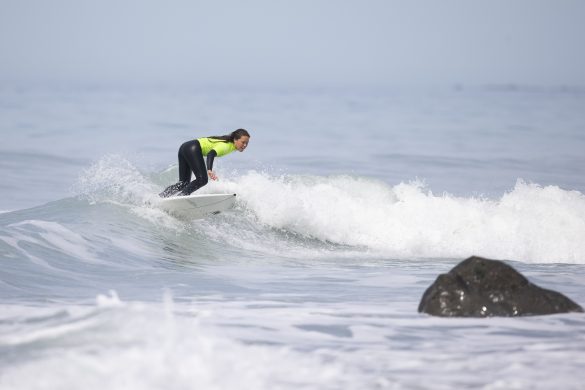 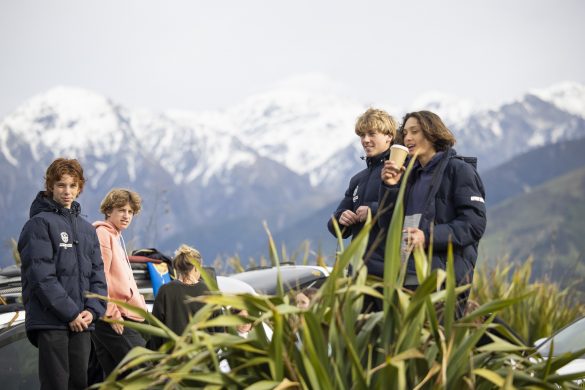 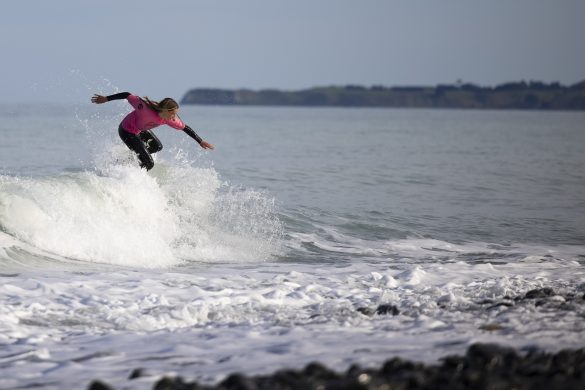 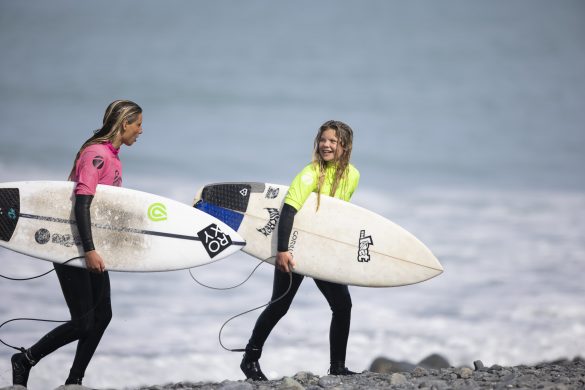 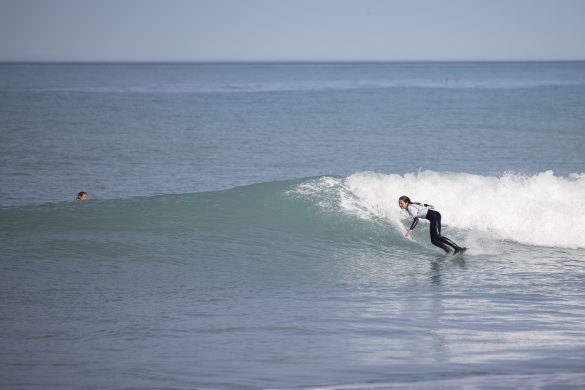 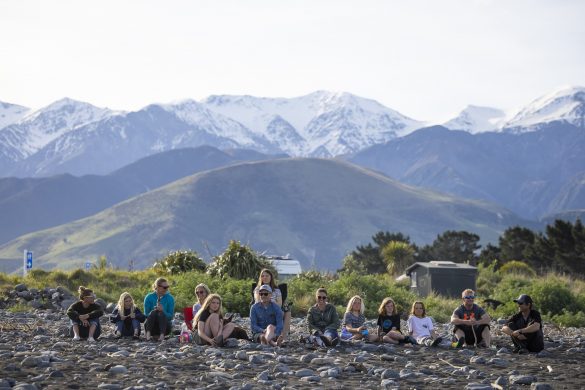 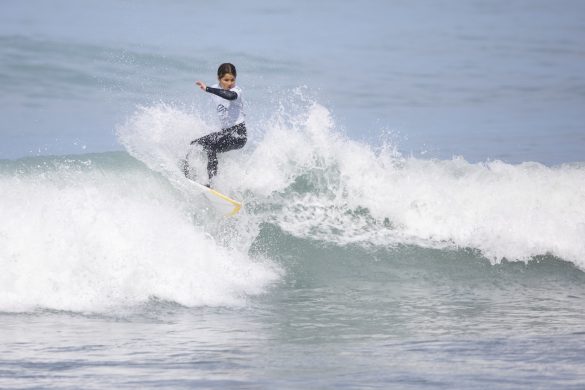 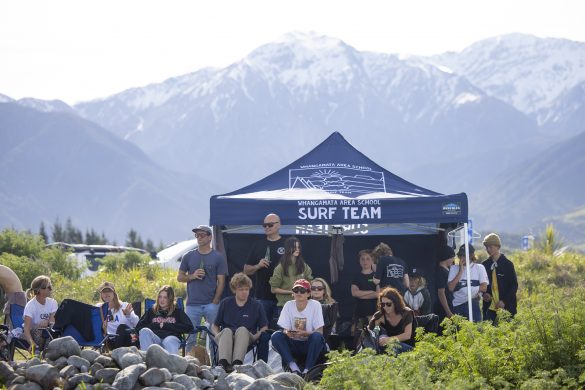 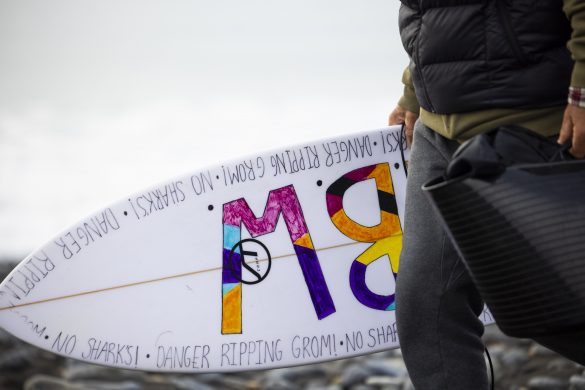 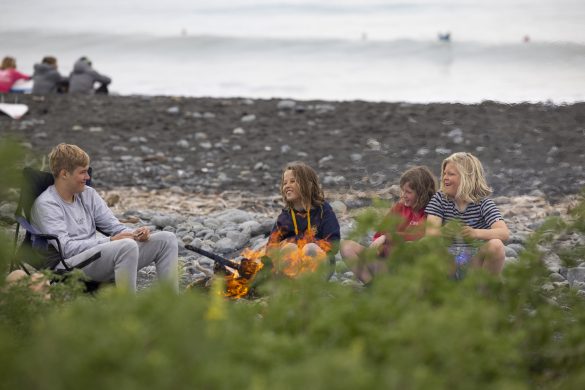 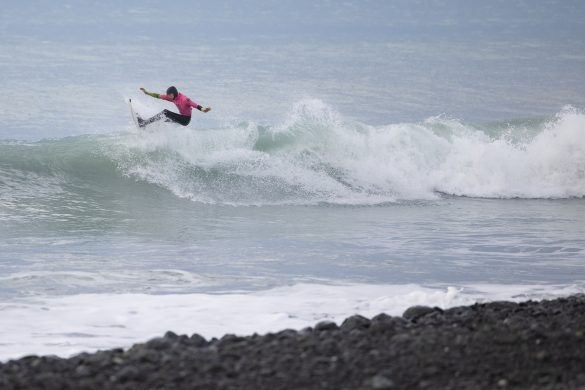 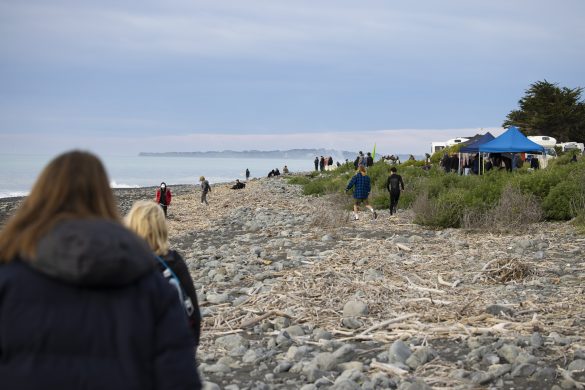 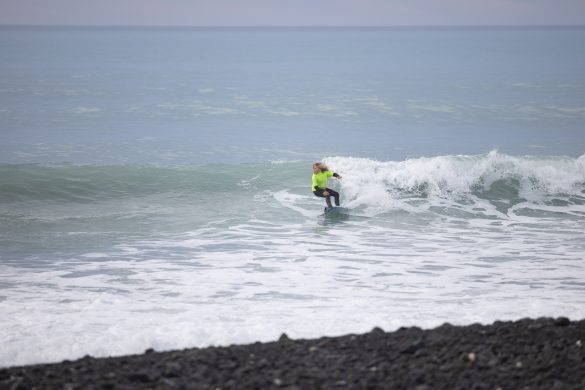 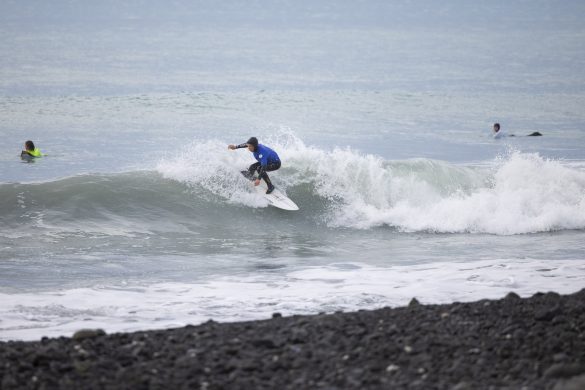 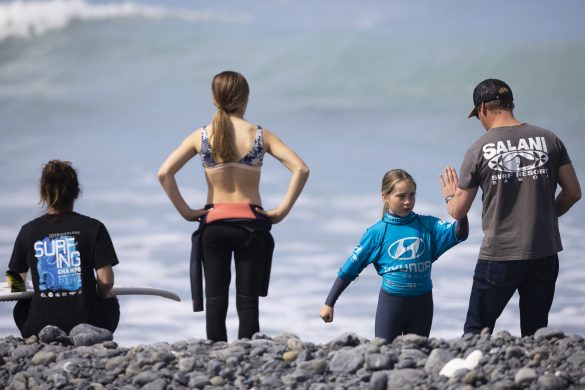 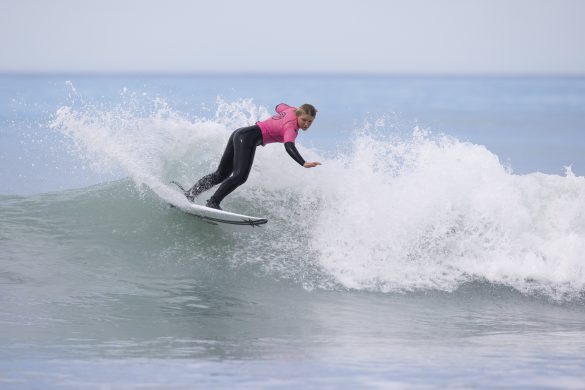 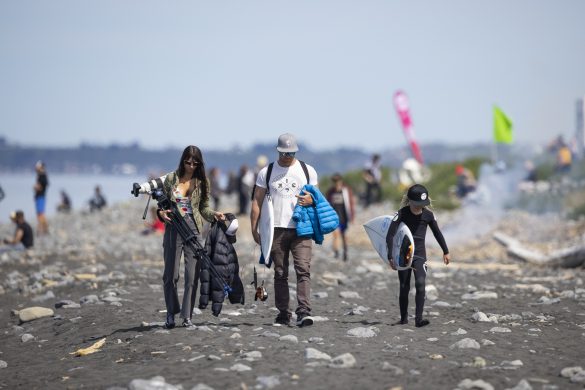 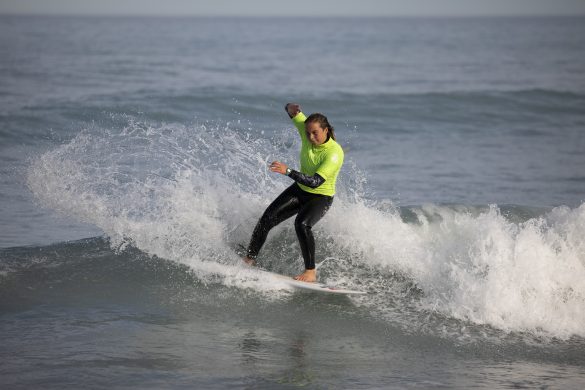 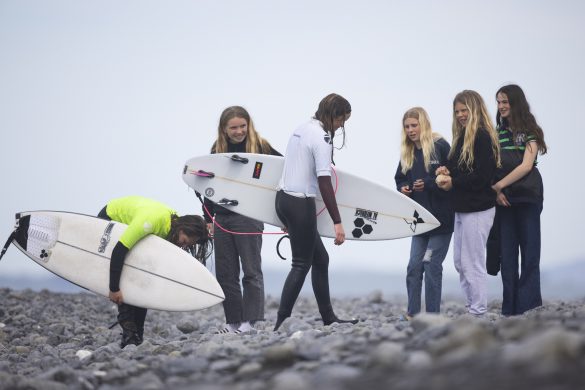 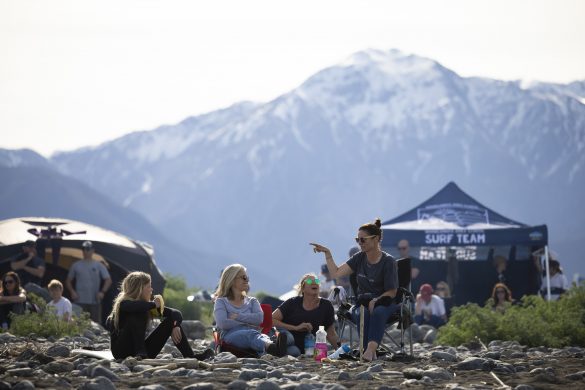 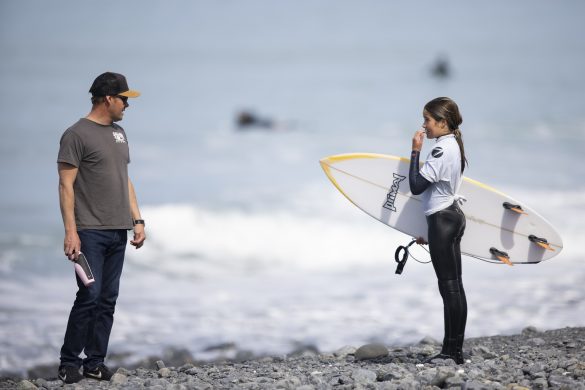