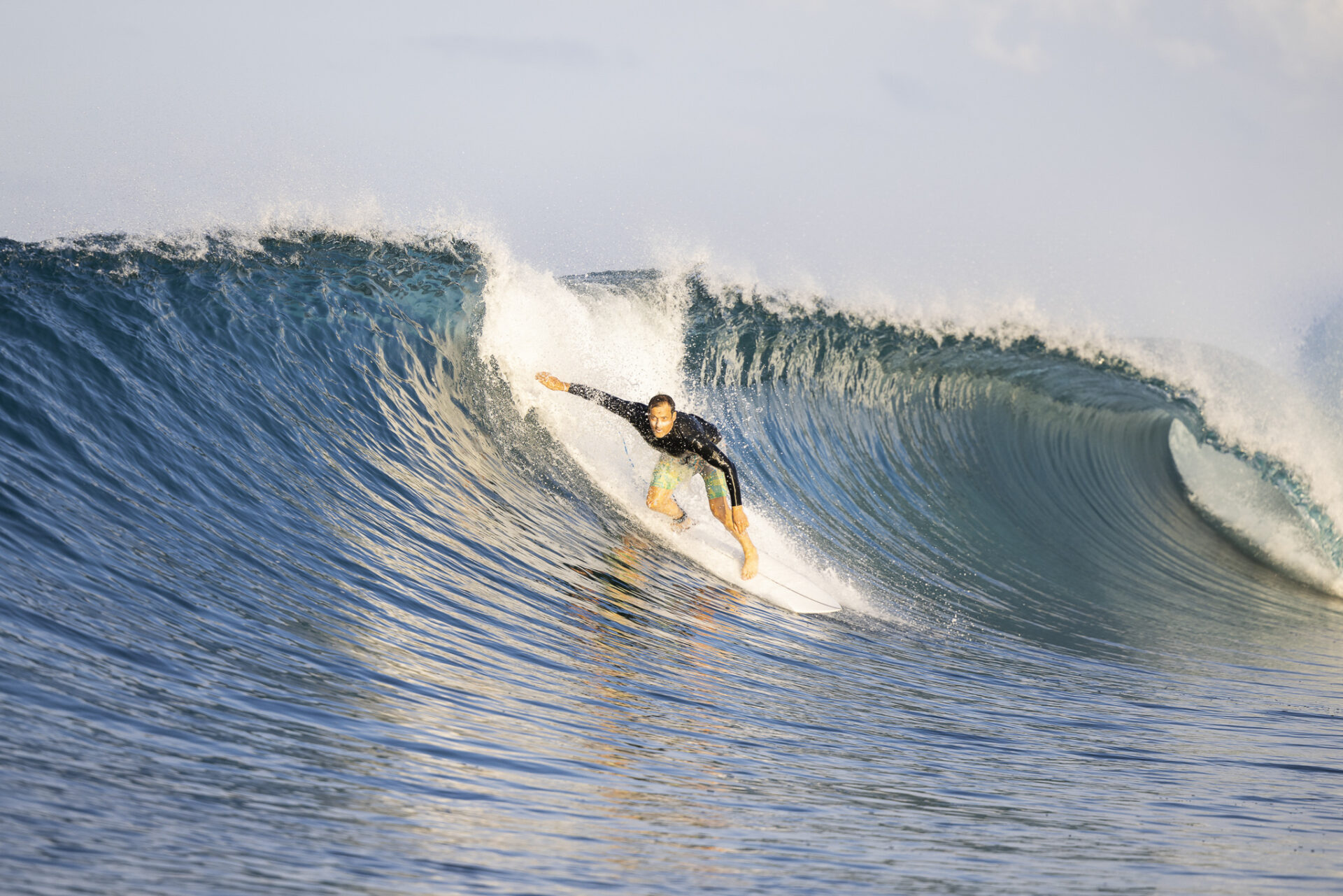 Macaronis has become such a famous wave that you need to book a slot to surf it. Which we did for two days … just as a new swell arrives. That’s the magic of having one of the most connected surf operators on board. So, it took us all by surprise when he suggested we skip leg day at Maccas. He had something else in mind …

We steam overnight to get to Macaronis, the crew working hard to get us there by first light. It seems like some kind of voodoo magic: we lie in our bunks with our belly’s full of incredibly good food thanks to chef Juli and his sous-chef Pakda, as the Hog negotiates the Indian Ocean. If the magic is good we’ll wake in paradise again.

I don’t even hear the anchor chain drop, but my alarm wakes me at 5:30am. I’m not the first up. Paulbags is already chomping at the bit. A tender load of Brazilians are first out. The lineup looks super fun in the dim light. Dark wedges rolling through from the outside and morphing into whitewater that wraps around the unseen reef.

We bumble around in the half light, torn between Juli’s impressively fresh and cool fruit salad, the endless coffee (kopi) and the view as the sets pulse around the reef. First breakfast is delicious and light.

Everyone has a different strategy today. Some of us are intent on the early – I’m in that camp. Others are waiting for the greediest surfers in the lineup to end their session. Others are looking at nearby options. Some are planning 3-4-hour marathon sessions. Others are hoping to sniper 5-6 quick incisive sessions through the day. Everyone keeps their cards close. It’s a game … and we will eventually learn that it is a team sport.

Macaronis is connected to a land-based surf camp and because it receives so much media attention it has become an absolute magnet for surfers in the Mentawai Islands. It’s one of the easiest waves to surf and has been called the funnest wave in the world, too. Aspiring pro surfers like to film an edit there – the walls make any surfer look like they’re one step away from a world championship.

To restore some balance the surf operators run a booking system. A maximum of two boats can book a slot each day. By 9am any other boats must leave the lineup for the day. It makes sense and keeps the wave more manageable and more fun for everyone.

But at 6am the place is a zoo and we’re stinging for some waves. Scuzz is already completely dialled in to our needs and quietly takes a small crew away to a nearby corner of the reef. We call it Footrot Flats after Wally – he is like a pig in shit in the small right barrels and his legs are pretty much skinned from his previous day’s hi-jinx. It’s a good fit. We hope he doesn’t get an infection.

Within a few sets we realise that this small, clean, usually fickle wave is actually more like a wave pool with a consistently barreling section. It’s quite mesmerising to watch these near-perfect waves peel down the reef – not a drop of water out of place. 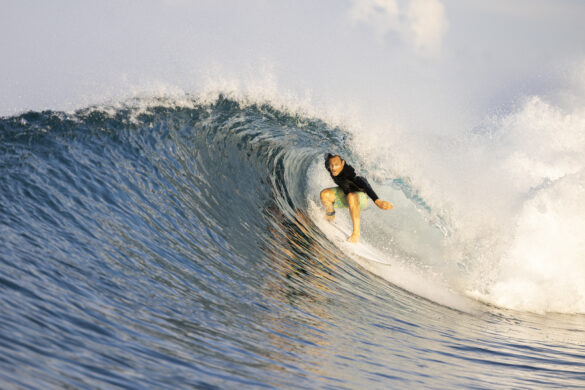 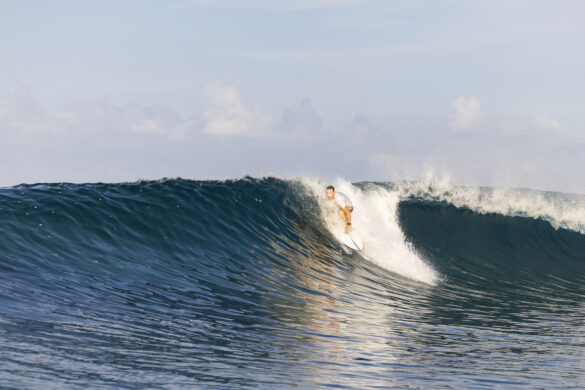 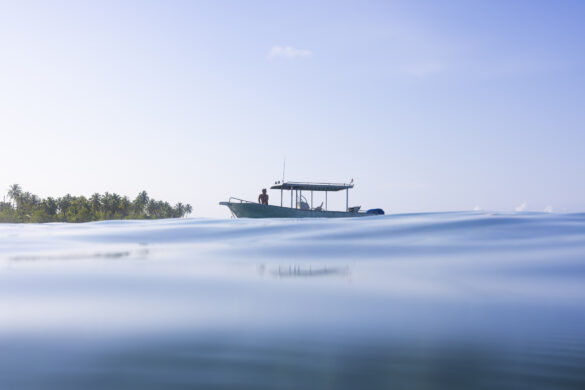 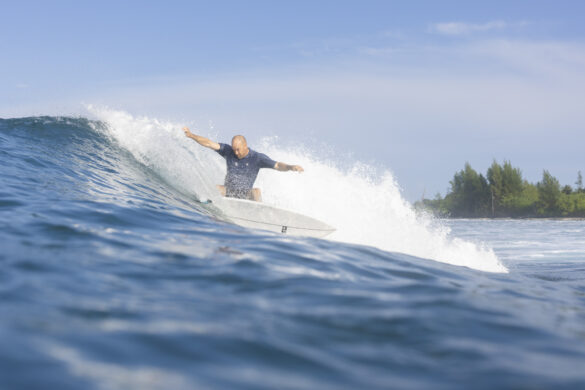 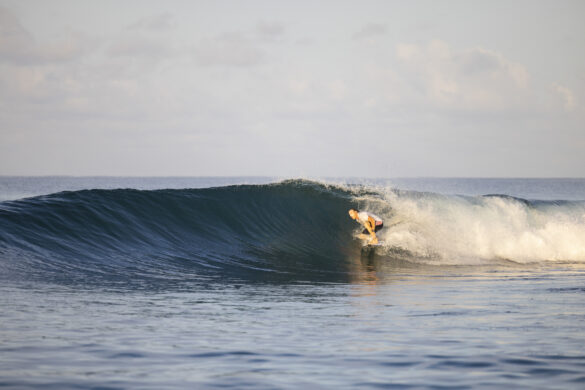 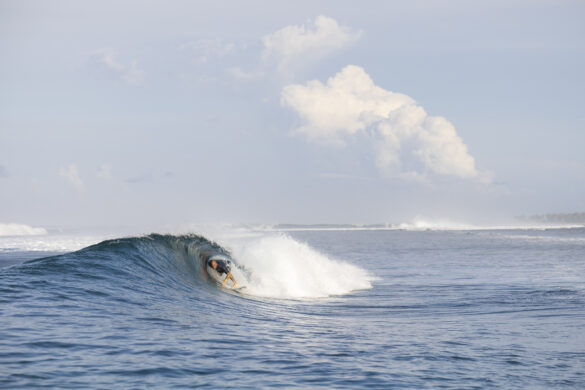 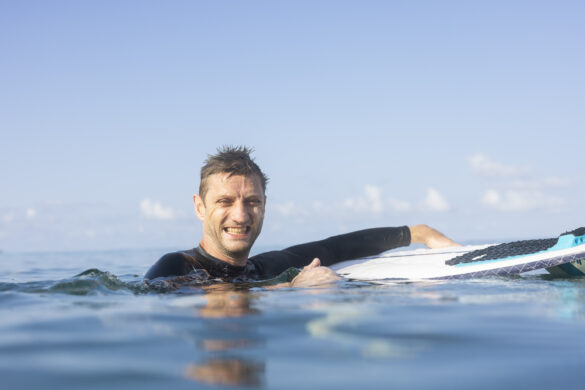 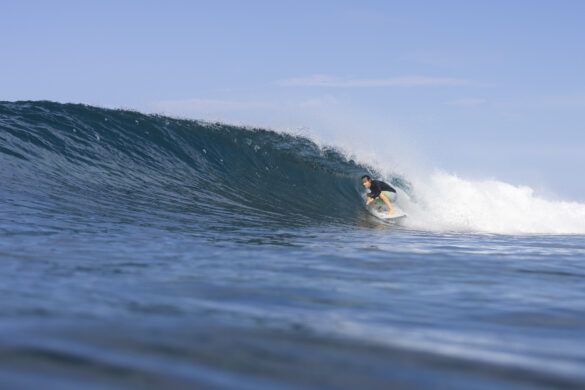 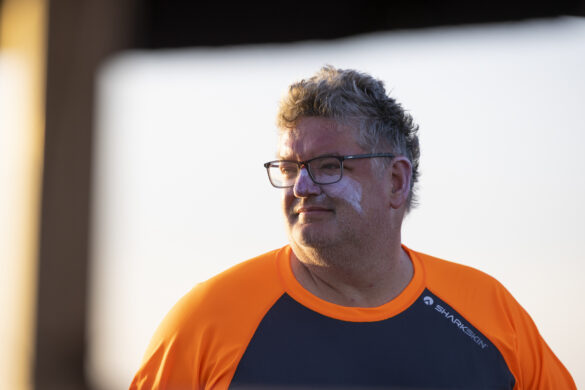 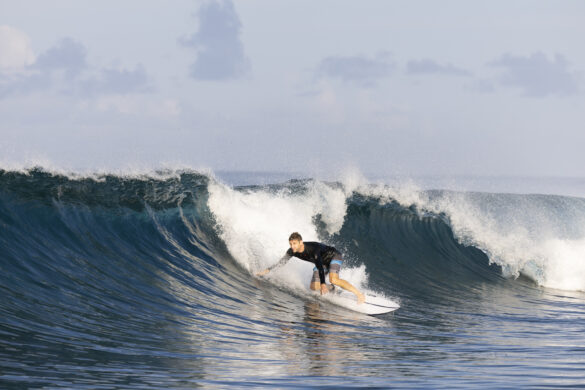 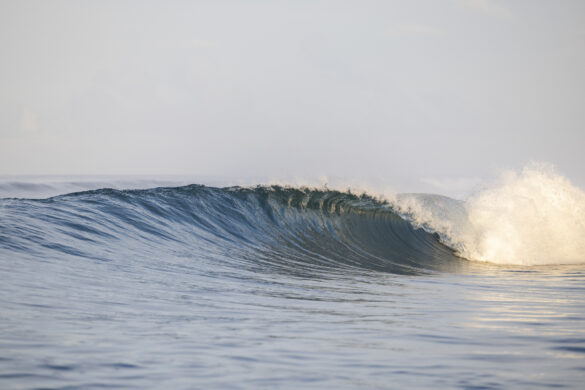 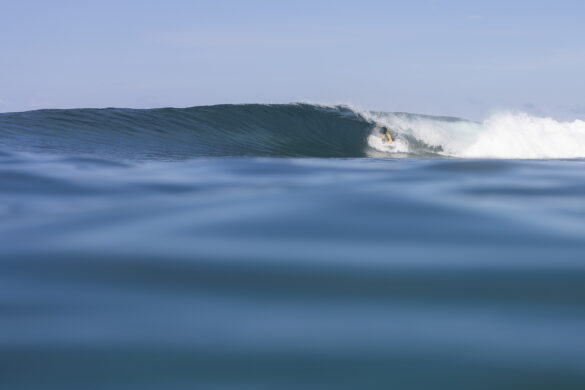 Mid-session a small shark swims beneath Brett and Paulbags – the first and only larger predator fish we’ll see all trip. Even though it seems like the perfect environment the large pelagic fish just don’t seem to be here. Possibly the islands are too fished out. Each reef has a few inhabitants, but nothing like the reefs of Australia, Samoa or Fiji.

Everyone gets a chance to get slotted as we enjoy the lineup to ourselves for the entire session.Paulbags eventually pulls into one, gets rolled and cops a fin below the knee. He instantly has a cigar-sized hematoma, which he seems quite happy about.

When we return to Macaronis there is a bunch of Australian surfers locking horns with a boatload of Brazilian surfers. We’re caught in an impossible war of attrition as we wait for the key protagonists to vacate the lineup.

Today is the hottest day of the trip so far. Most of us are melting. The sun is frying us, too. Many are dialing up the air-con to find some relief.

Juli makes us soto ayam for lunch. It is insanely good as we soon learn all of his food is. Soto ayam is like a chicken soup that’s finished more closely to a ramen, but with rice. Indonesians don’t consider it to be a proper meal unless it comes with rice. And so we have a rice cooker on 24/7 should we feel hungry in between meals.

The thing with the soto is that it is also super healthy – all the food is good for you and that is definitely why we’re able to surf for so long each day and recover so well. 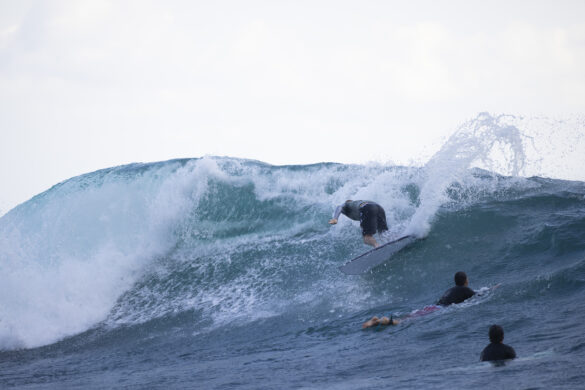 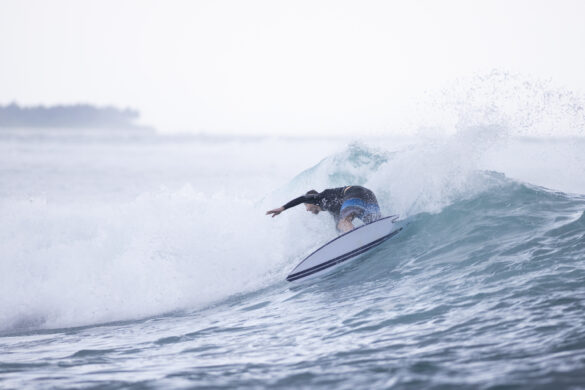 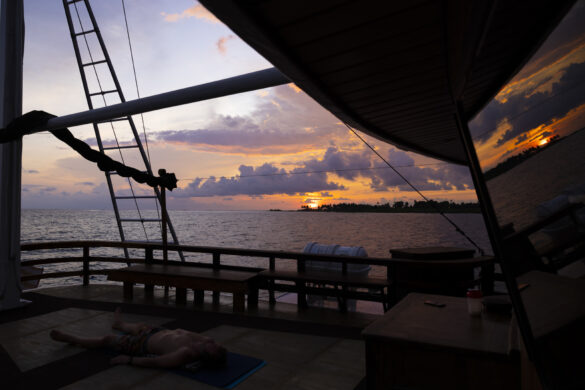 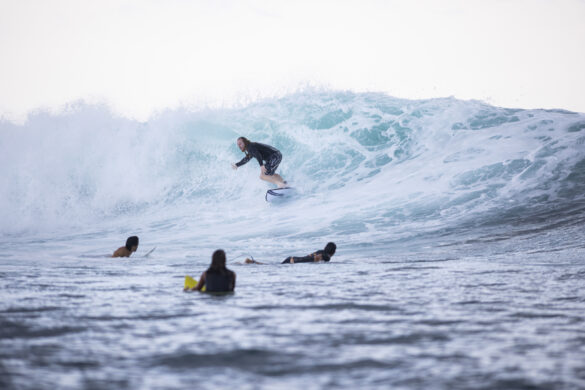 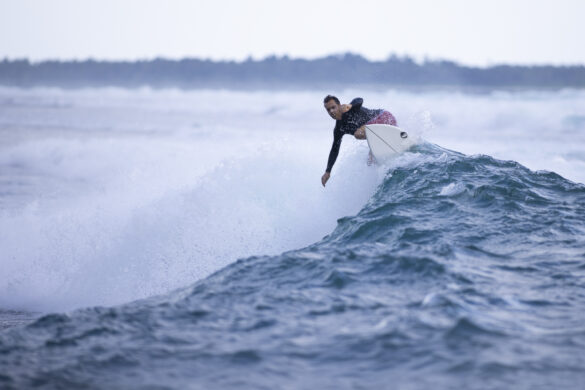 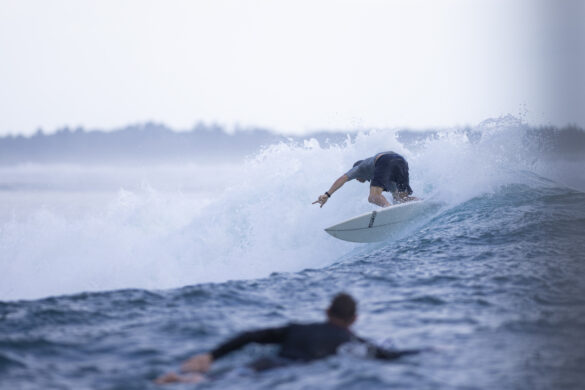 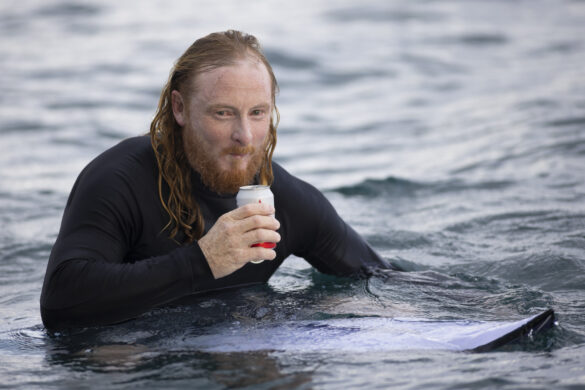 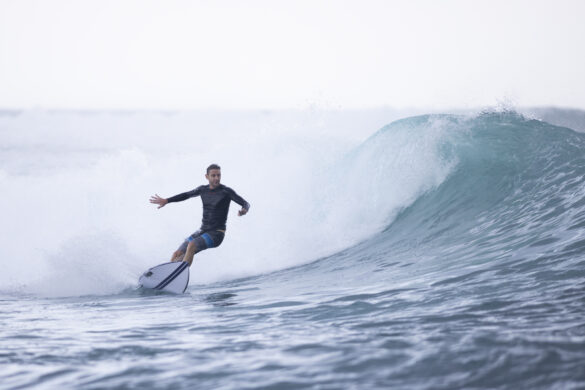 By 5:30pm the sun is setting and we’ve surfed our brains out at Macaronis. We’ve also had our first deep wounds from the reef. Paulbags climbs into the tinny with blood pouring from a deep cut in his toe. It looks like the reef tried to take his whole big toe off. He’s still smiling, Bintang in hand in paradise. 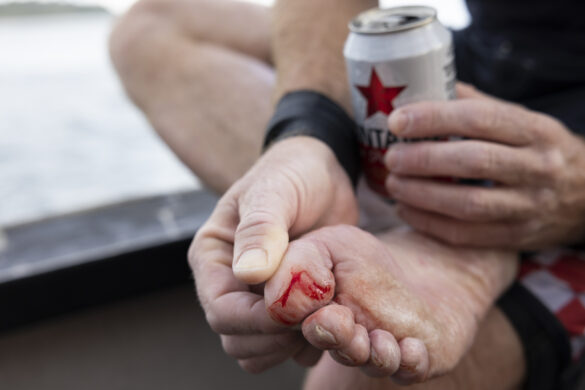 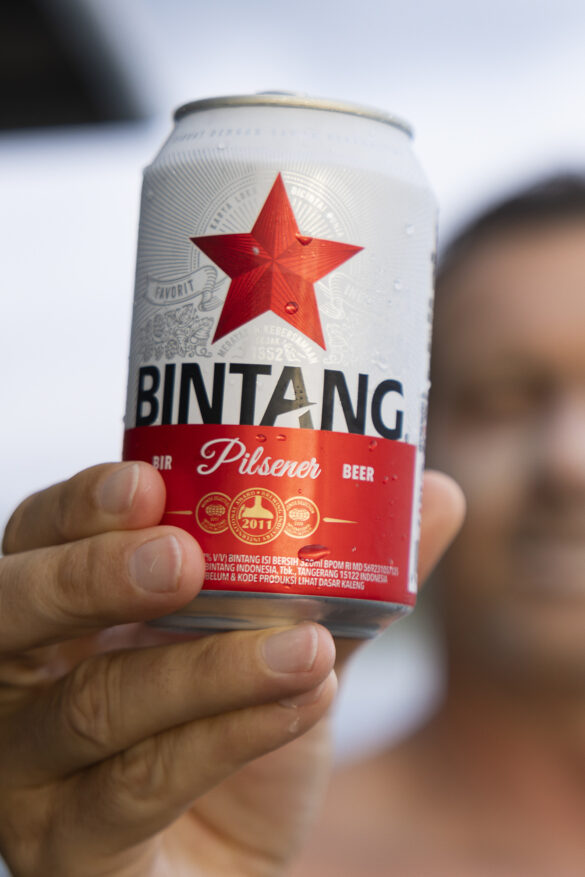 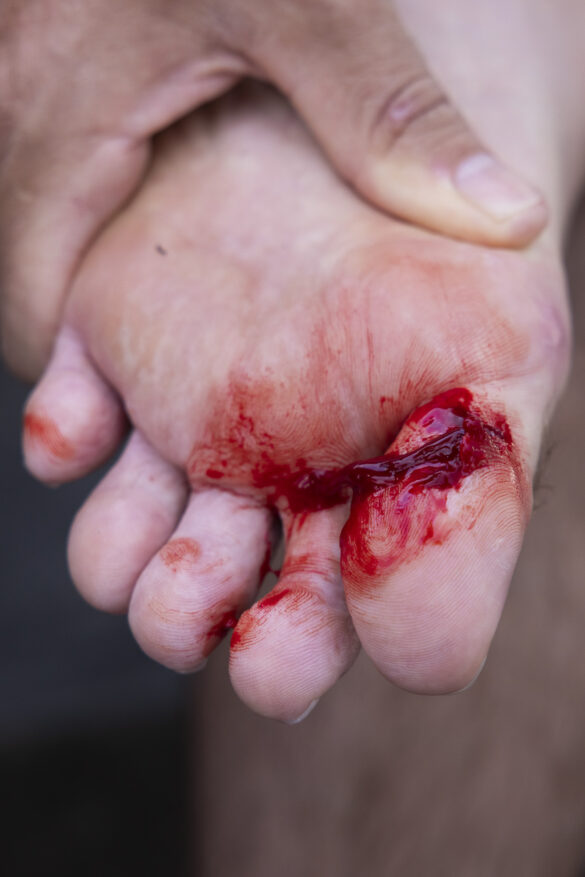 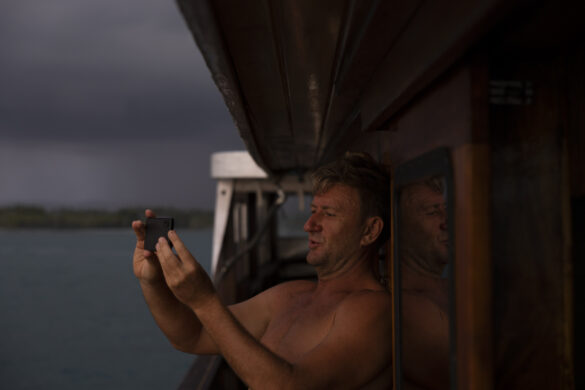 Wally has skinned his toes, Bones has blood coming from his arm, then Chris paddles up and he has a corresponding cut to Paulbags’ on his opposite big toe. They compare severity and chug back a Bintang each to bookend a pretty incredible day in the Mentawais.