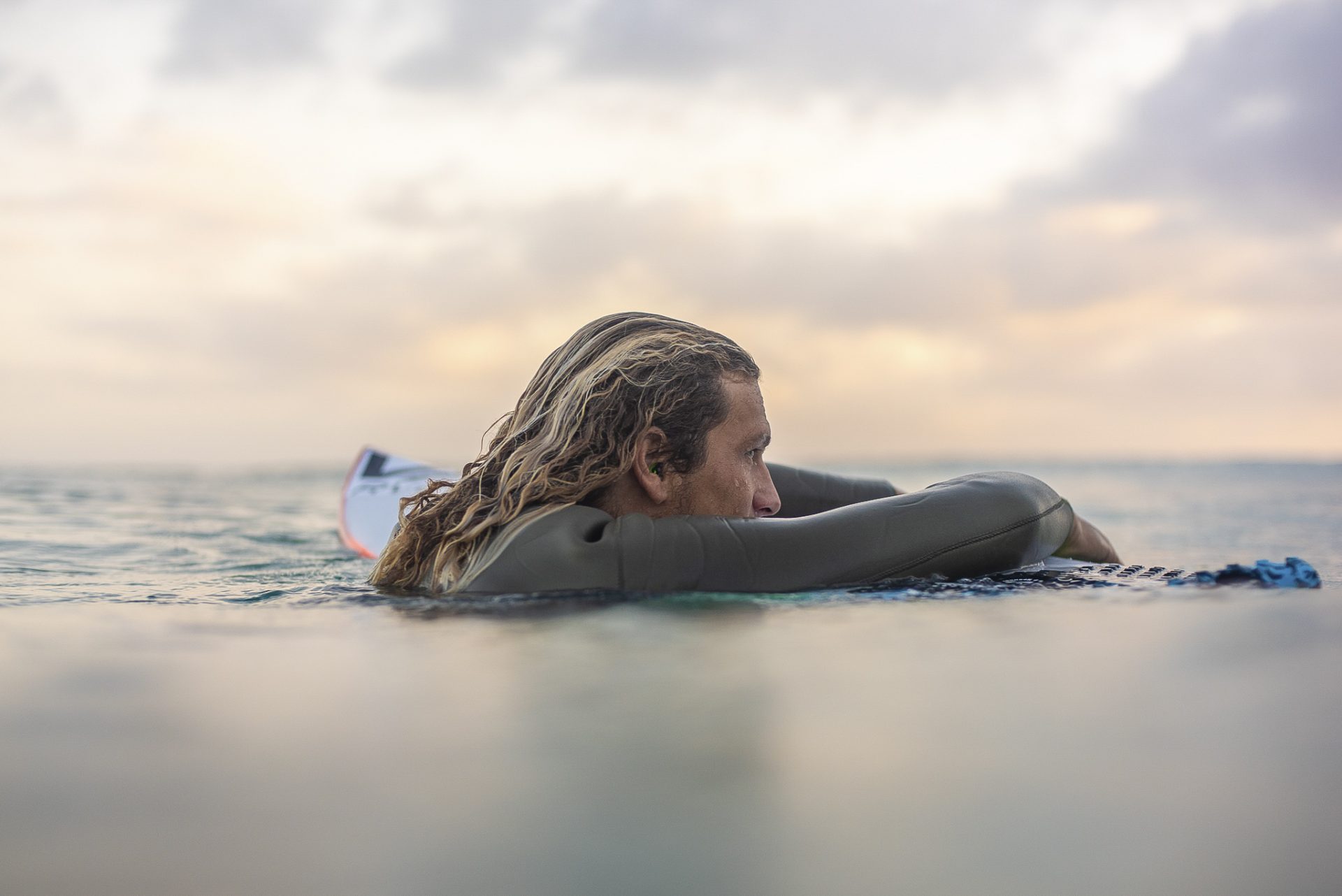 There is no hiding the fact that the first four World Championship Tour events for 2019 have been a battle for our New Zealand athletes, Paige Hareb and Ricardo Christie. Both have chalked up a slew of first round exits. But those results don’t quite tell the whole story.

On the eve of the Oi Rio Pro, stop number five of 11 (10 for the women) for the 2019 World Championship Tour (WCT), NZ Surf Journal catches up with the two New Zealand athletes in the trenches and at the forefront of the sport.

The 2019 WCT season is also the first time New Zealand has ever had two surfers on the tour at the same time. But does that make it easier when the intensity of competition winds up at events?

“It’s been awesome!” offers Paige. “I feel and see even more support from New Zealand, which is pretty cool.”

Paige said they tried to make sure they were at the event site to support each other’s heats.

“I even try and sneak a couple of tips off Ric,” she laughs. “But, yeah, just really enjoying being able to support another Kiwi there rather than having to choose which Aussie I like the best to support. [laughs]”

Heading into Rio, Paige is sitting in 16th position in the women’s rankings with Ricardo in 29th on the men’s. Both surfers have suffered from early exits with Paige taking two Round 2 exits (for 17th) and two Round of 16 exits (for 9th).

Ricardo has suffered a succession of Round of 32 exits and 17th place finishes. What the stats don’t tell you is the high scoring waves they did get, or the occasionally inconsistent numbers rolling out from the judges. Yes, that’s part of it. But it certainly hasn’t helped either of the New Zealanders.

“The close losses suck, but I would rather lose like that knowing I was close and surfing good and able to get some good scores rather than losing with two threes,” reveals Paige. “I do take a day or two to get over the losses and it makes it harder when you have people telling you that they think you should have won that heat.”

“I’ve been doing it for so long now though I’ve formed an internal on and off switch,” she shares. “Once I decide to turn it off then I’m already moving on and looking forward to the next event. I’m very competitive and hate losing, but at the end of the day, we’re surfing! We are very lucky.”

“I’ve formed an internal on and off switch. Once I decide to turn it off then I’m already moving on and looking forward to the next event. I’m very competitive and hate losing, but at the end of the day, we’re surfing! We are very lucky.”

That ability to process and move forward from failure defines the best athletes in the world and it hasn’t escaped Ricardo either. At Bells, in waves that completely suited his powerful rail game, he fell at the hands of a blazing Owen Wright.

“Bells is in the past,” Ricardo shared through Instagram after the event. “To be honest, I was bummed to not keep surfing while the waves were like that, but my head is up and I’m onto the next. I’m embracing the feelings I feel and will channel that fire into what I want to do better next time. I’m loving this challenge and will never stop learning and evolving whilst being immersed in this environment.”

At each event the presence and support for the Kiwis seems to build to a new level and social media is abuzz ahead and during their heats. That support adds another layer of pressure, but in a good way.

“I absolutely love and appreciate the support,” she smiles. “I like the pressure because most of the time I think I use it to my advantage, but it definitely does make it harder when you lose. I feel so bad and really just want to do well for everyone who does support me.”

Paige admitted that she did tend to over-analyse her performances, but tried to learn from them as quickly as possible and move forward.

What’s frustrating from the outside is that we know Paige and Ricardo both have what it takes to win heats – it’s almost as though their natural flair is quashed in the heats.

“Sometimes I overthink and try to do what I think the judges want,” concedes Paige. “Sometimes I take Ricardo’s advice and ‘just surf’. I’ve been doing it for so long, but that’s the beauty of surfing, I’m still trying to figure out the perfect heat plan. The ocean is never the same, so your heat strategy is always changing.”

With the seeding the way it is in the WCT, both Paige and Ricardo keep meeting the very best surfers of the competition in those early rounds. We ask them if that changes their approach when up against those very top ranked surfers.

“It’s a bit frustrating meeting them early, but to be the best you have to beat the best,” asserts Paige. “I like surfing against them because it fires me up more to go hard and I have nothing to lose. For some reason I like surfing against Steph [Gilmore] and Carissa [Moore]. They fire me up the most – I really want to beat them. I also personally think they are the best all round surfers – in particular Carissa. All the girls are good though – there are no easy heats anymore.”

She can take some confidence from her Round of 16 match-up with Carissa Moore in Bali where Paige took the highest wave score early on. Unfortunately she was unable to find a similar back-up to get her though.

“That was a nice positive from that heat,” she shares. “Towards the end of the heat I knew I could do it more than ever, I just needed another good wave. I got the chance, but unfortunately I was a bit out of position, which made my first turn not as good as what the judges wanted.”

“I went and talked to the judges after that heat,” she smiles.

“I’m embracing the feelings I feel and will channel that fire into what I want to do better next time. I’m loving this challenge and will never stop learning and evolving whilst being immersed in this environment.”

With the addition of the tino rangatiratanga flag to the shoulder of his WSL jersey at Keramas for the Corona Bali Pro, spirits looked high for Ricardo. He was in full flight in the seeding round only to be stopped in his tracks by Kolohe Andino in the Round of 32. His attention then moved to WA where he knew he had an advantage.

“Last time I competed at the Margaret River Pro I surfed The Box in all three of my heats,” recalls Ricardo. “It was proper firing. I definitely took some beatings, but I also got some epic visions etched into my memory bank. I love the unpredictability of this event.”

That unpredictability proved to be his undoing as the tide bottomed out at The Box and the event moved to Main Break. Missed opportunities in the heat meant Ricardo couldn’t capitalise on his 7.77 handing Kanoa Igarashi the heat win.

In Margaret River, Paige came up against Caroline Marks in the Round of 16. Caroline is one of the youngest surfers in the WCT and sits in the top 3 in 2019. It was a heat that Paige was excited to contest.

“She’s definitely surfing with a lot of confidence at the moment,” explains Paige.

“She dropped in on me in a free surf in Bali so in my head I was like, ‘I owe her’,” she laughs. “But the bloody grom came out firing and pretty much won the heat in the first five minutes. Obviously I was gutted, but there wasn’t much I could do about it. So the grudge is still there brewing with that one. Watch this space!” [laughs]

Paige said she was fit and healthy right now, injury-free and making a big push for Rio.

“I am taking my coach with me,” she explains. “I would love a result here and believe I have a good chance of getting one here. I’ll be doing everything I can to get one.”

To do that she said she would be implementing some learning from the first four rounds of 2019.

“You have to be gnarly and surf crazy good,” she laughs. “Absolutely no mistakes! I’ve made a few bad wave selections, therefore not giving myself the best opportunity to do my best surfing. I think wave selection is my biggest thing first and foremost.”

In previous years Paige has always looked stronger and stronger as the season progresses.

“I feel like it’s all about to start now,” she offers. “Like I said, I’m taking my coach to Brazil and then we are going to the WACO wave pool and the Kelly Slater surf ranch to work on my surfing. So the next month or so should be pretty exciting and hopefully the ball will keep rolling from there.”

The small break in the season has also given Ricardo some time for reflection.

“I’ve had a bit of time to take a breath after the first solid leg of events,” he admits. “It didn’t quite go as planned, results-wise, but there were some positive moments I have taken from my performances. I definitely learnt a lot – especially in the man-on-man heats. It’s been great working with Stace Galbraith [surf coach] as we’ve been able to analyze things in much more detail then possible on my own.”

For both Ricardo and Paige the need to slot in a few WQS events looms over them if they want to hedge their bets for re-qualification in 2020 – a key year with selection for the Olympics in Tokyo in the mix.

Paige is targeting the Supergirl Pro, California QS6000, US Open, Huntington Beach, CA QS10,000, Pantin, Spain QS10,000, Port Stephens QS6000 and possibly a smaller rated one somewhere else if she can manage to fit it into her schedule.

It was unclear which WQS events Ricardo would be targeting, but he certainly isn’t abandoning hope.

“As long as I am doing everything I can to give myself the best opportunity to perform, then I know it will come together the way I envision when the time is right,” he shares. “I have faith in the process. On to Brazil and South Africa next.”

“As long as I am doing everything I can to give myself the best opportunity to perform, then I know it will come together the way I envision when the time is right. I have faith in the process.”

Juggling three kids with his role as one of the world’s best surfers in the turmoil of a brutal WCT campaign is no easy feat. Ricardo is quick to acknowledge those around him.

“I’m so grateful for the love from my family, my support team and my sponsors. I couldn’t do it without them all.”