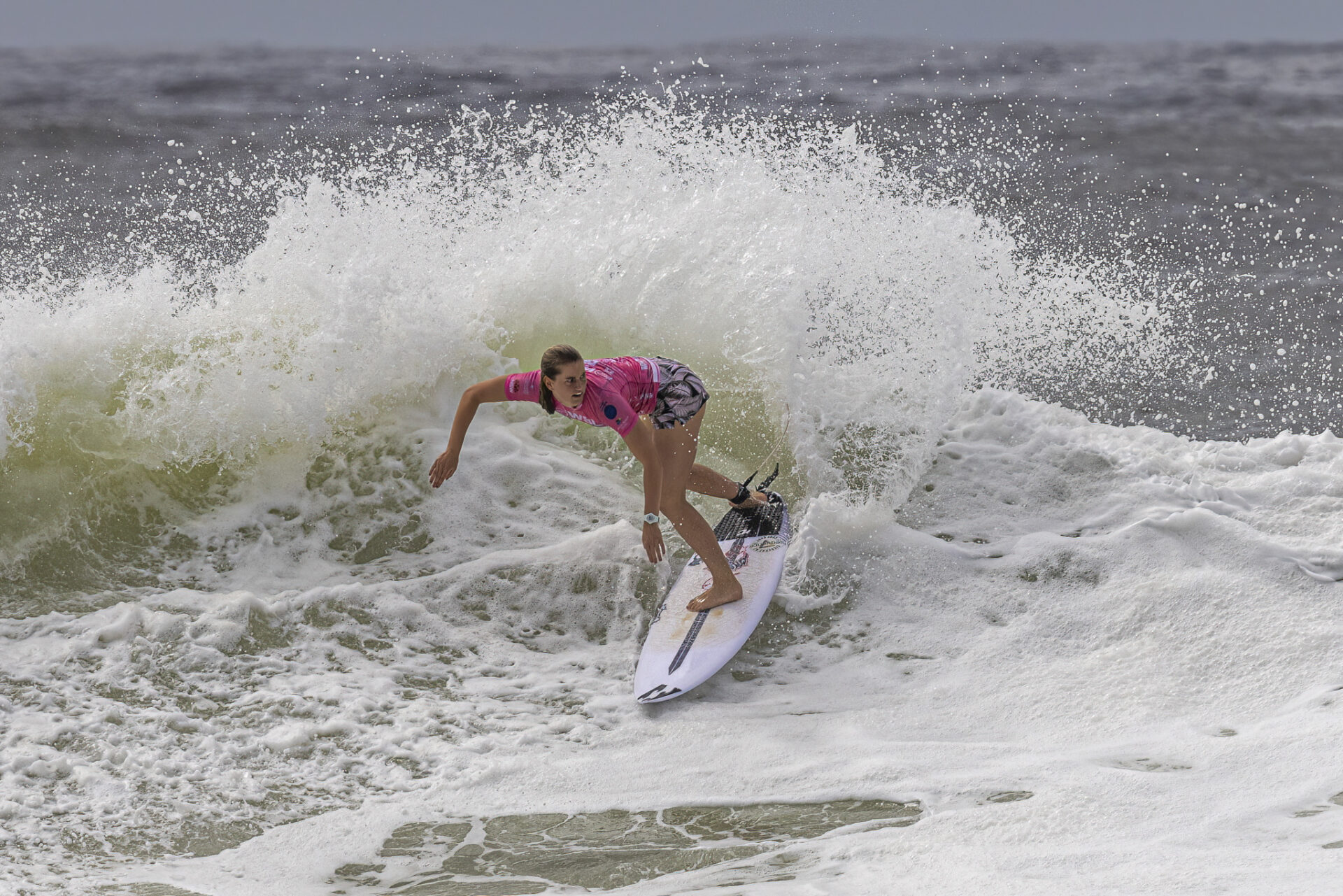 Paige Hareb, Saffi Vette and Tiana-Breeze De Mooij have all been eliminated from the Sisstrevolution Central Coast Pro despite promising starts in the early rounds of the latest stop on the Australia-Oceania Regional Qualifying Series.

Paige and Saffi met in Heat 2 of the Round of 32 with Saffi struggling to find a backup wave in a complicated Avoca lineup. The silver lining to her third was getting to see Paige advance in second. In the third heat of the same round the Gold Coast-based Kiwi, Tiana-Breeze, came unstuck, finishing fourth and ending her campaign.

While Saffi is making the most of Billy’s generous WQS knowledge sharing attitude, Paige is carving out her own path.

“I’ve ditched the New Zealand team and I’m traveling with long-time friend and competitor Philippa Anderson,” she laughs. “I’m mainly doing it by myself, but Philippa and I are travelling together so we try and motivate and help each other out.”

Paige said she was still waiting for a highlight from her QS campaign.

“I had a shocker in the first few events,” she admits. “And the first three weeks in Australia it was flooding with horrible weather and surf.”

“Losing always sucks no matter how long you’ve been doing it for, or how many times you lose – you never get used to it,” Paige explains. “But I’ve been around long enough to know how to deal with it and move on and look forward to the next event.”

At moments in Avoca, Paige has looked strong and calm in her heats, but struggled to find scoring opportunities.

“The waves have been tricky the whole time I’ve been in Australia,” she offers. “It was bigger and cleaner at Avoca so I felt good when I got the right one, but still found it hard to be in the right spot. It’s definitely a little frustrating. I’m feeling good within myself and my surfing, but it still comes down to needing to get the right wave for it to all come together. Next one!”

Tiana-Breeze has been based on the Gold Coast for the past three years and, like Paige, wasn’t travelling as part of the Kiwi crew. Her approach this year is a bit different as she explores other focuses outside of surfing.

“I’m just picking and choosing what comps to do for the best points,” she explains.

She likes the new regional QS structure, but believes the Australia-Oceania leg is stacked.

“In some ways it is good because you can work for the rest of the year and save up to do the comps, but you have to find a job that is willing to pretty much give you two months off,” she smiles. “Also, I personally believe that Australia is the hardest leg of the WQS. Some competitions overseas don’t have the level of talent of Australian surfers. That makes it harder to get a good result.”

When it came to Avoca, Tiana-Breeze admitted the line up was tough to read.

“I narrowly scraped through my first heat then pretty much melted in my next round,” she recalls. “I am still yet to pull together a good heat on the QS even though I have been doing it for nearly five years. Competition surfing is so hard I honestly believe you either have it or you don’t.”

“I’m still waiting to convince myself that I can surf a heat,” she laughs. “It’s such a mental game and it’s still something I can’t quite wrap my head around, but I know I have the ability and can surf just as good as the girls winning the competitions. It’s just putting it into practice and believing in myself.”

Certainly to climb into Challenger Series contention the Kiwi girls will need to make the most of remaining QS events.