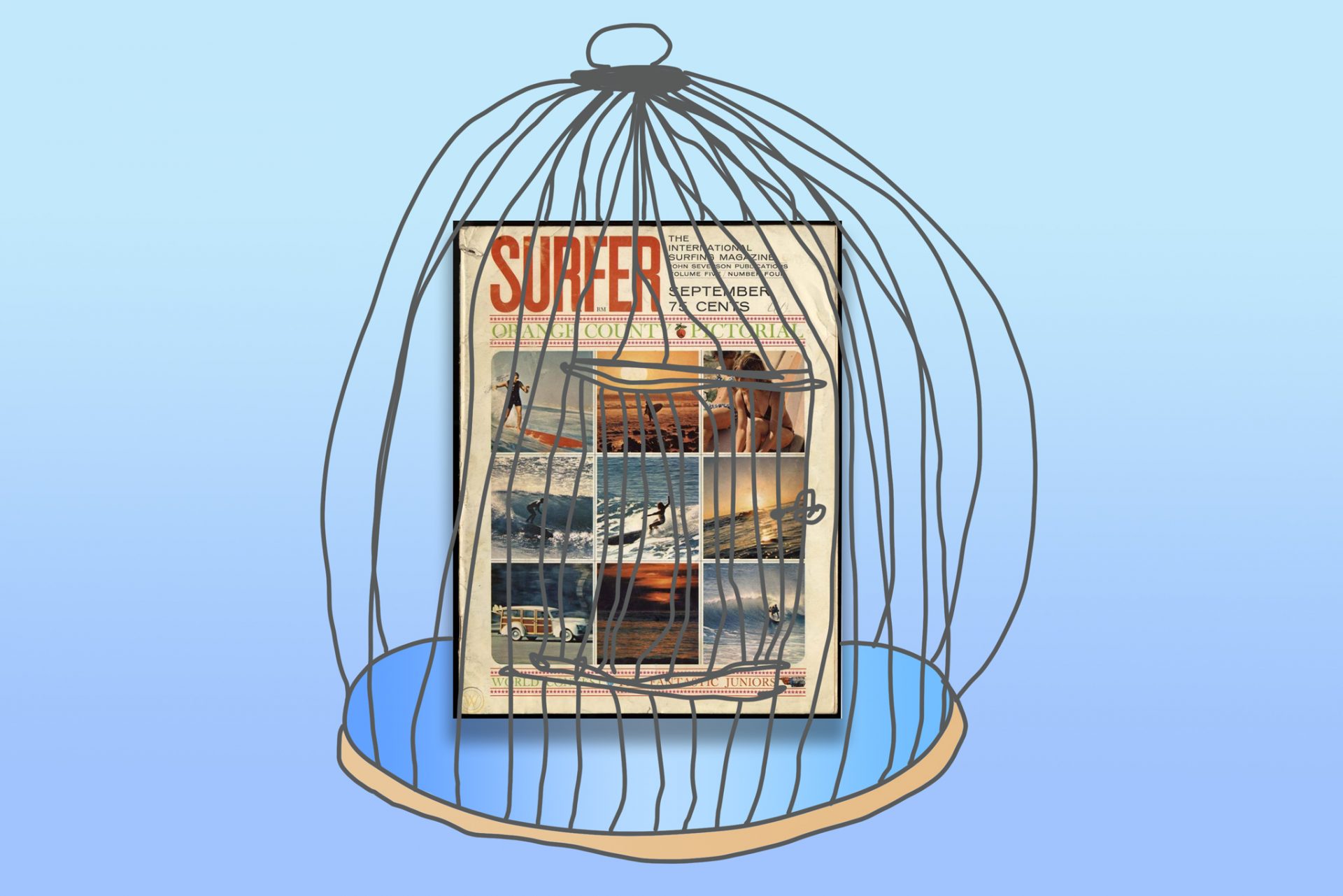 Is Surfer Magazine The Canary In The Publishing Mine?

Just last week Surfer magazine folded. Yes, the seminal work that was started by John Severson in 1960 was suddenly no longer a viable business, according to its publisher, American Media Inc. It was cast aside as easily as you might squish a sand-fly on the West Coast. No fanfare. No acknowledgement of the fact that masthead had captured and fueled an entire sport and lifestyle all the way through to its last week, 60 years after its inception.

Surfer magazine is not the first to fold, nor will it be the last in a long list of casualties in the surf media wars. To be a bit more transparent … and verbose … the plight of print media isn’t restricted to surf magazines. We all know that. Here in New Zealand, German mega-publishing house Bauer used Covid-19 as its excuse to bail on all their Kiwi titles and employees.

Magazines, regardless of what topic they cover, are in struggle street right now. Print cannot compete with the immediacy of online media. But it doesn’t have to. What it can do is provide the full and carefully curated backstory. Sadly, many publishers, and their bean counters, still try to fit the “modern” formula back on to magazines. It’s one that just isn’t working.

There are exceptions and oddities to this. One well-loved New Zealand tramping magazine has a huge readership and a huge subscriber base. The income from the subscribers has eclipsed advertising revenue since it started. The reason – the age group it satisfies is older (includes baby boomers) and they tend to be more organised and happy to pay in advance for home delivery when the quality and relevance of the content is so dependable.

Your costs in running a magazine are; staff, printing (and that’s a big one), distribution and then contributors. So then the bean counters’ come in and say, “well, advertising is easy money. The other two sources are hard costly yards … Mr Publisher put your efforts into going after the low-hanging fruit. Further to that why are you paying so many sub-contractors (contributors)? I thought you said you employed the best editors?”

Add to this another formula: the editorial and advertising mix. This is a ratio – the maximum advertisements the publisher perceives they can get away with compared to the actual editorial content. And Surfer magazine was terrible at this (or from a publisher’s point of view great!). In the late ’90s and early 2000s the scales were tipped well over 50:50. Generally, 60 percent editorial and 40 percent advertising feels about right for a reader.

In saying that, surfing magazines do, or did, fall into a unique category. Often the adverts had the best images in them. So the readers were stoking out as much on the latest Rip Curl Search or Reef advert. In fact, as a surf magazine editor I endured many an ad agency meeting where I had to repeatedly explain our advert culture to the marketeers. More often than not a simple brand logo in the bottom corner of a double-page spread action photo hit the spot. The logo aligned the brand with that personality and talent. Matt Archibald was bad ass … therefore, MCD boardies were hardcore. You could be hardcore if you wore them, too. Simple. Ad agencies rarely got it.

The industry spent more and more money on advertising, surf mags and their publishers lapped it up. Quite rapidly revenue became heavily tilted toward advertising.

In the late-’90s the surf industry went rad. That’s been well documented. It meant surf mags blew out the thirds formula. It was insidious. The industry spent more and more money on advertising, surf mags and their publishers lapped it up. Quite rapidly revenue became heavily tilted toward advertising.

And this is where the criticism that surf mags were becoming mouthpieces for the industry really found its footing. The slight has long been levelled at mags, but it became louder and louder as the revenue pendulum swung. In a culture where the adverts were prized as much for their editorial content it is hard for anyone to distinguish.

Another thing happened. Publishers liked and then got used to the revenue formula being that skewed. They started thinking the advertisers where their core clients, not their readers. They also stopped chasing subscribers and bookshelf sales. Advertising revenues soared and readerships fell.

A good editor knows they are there for the reader alone. That’s their job; stoke out and entertain the reader. But the editor’s boss, the publisher, was now used to the easy money.

Readers of surf mags, the hardcore, were also affected. They became disenchanted with the bloated surf industry. They didn’t want to wear an Australian-branded T-shirt made in the same third-world sweat shop as Nike. The hardcore are not dumb. The surf mags that have died the fastest are in fact the very same that tried to hold on to keeping the industry happy.

Surf mag employees are not dumb either. They are core surfers first, that got the chance to document the culture they love. But more often than not, they got caught between the devil, a non-surfing publisher, and the deep-blue sea.

I often get asked, “what do surf magazines need to do to survive?”

Firstly, I’m an optimist, I think there is still a place for surf print, and specifically magazines. My go to is “change the formula man” and behind that statement lies all the above. There’s no silver bullet, but there are a bunch of lessons from the past.

Surf mag employees are core surfers first, who got the chance to document the culture they love. But more often than not, they got caught between the devil, a non-surfing publisher, and the deep-blue sea.

When magazines were invented in the 1800s they did not have advertising in them at all. They relied solely on their subscribers to pay for the printing, wages and contributions.

The thirds formula was only a temporary guideline that clearly isn’t working anymore … and in fact it got super distorted during the surf industry boom, that’s long since burst. The rule of thirds is irrelevant in publishing these days.

Surf mags got so massive and so profitable that corporate publishers swept in and bought them up. Just about all those titles that got sold off are the ones that are gone – including Surfer that was bought by American Media Inc, along with many other action sports titles, in 2019. The few magazines that are left are owned by publishers who are surfers and who understand the cultural tide ebbs and flows.

Let’s just hope the tide turns to once again fill the void for all those who love the smell, feel and tactility of a surfing magazine. You know the moment: glossy inspiration wedged into the dashboard of an old wagon, as a bunch of mates head for a promising strike mission.

The Great NZ Surf Journal Board Giveaway: How It Works