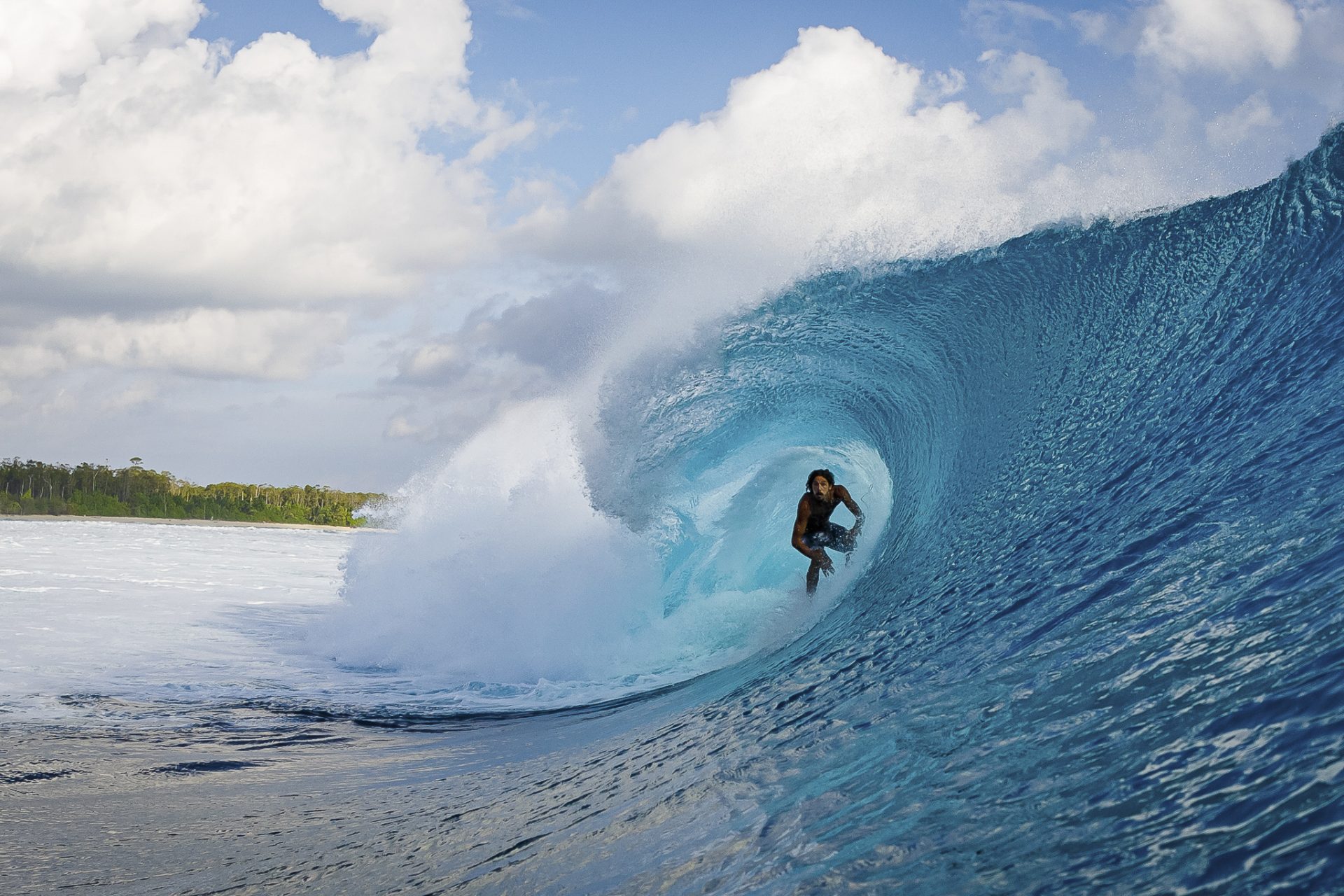 In 2017 Mount Maunganui’s Travis McCoy went for a surf that ended in an horrific fin gash to his face. But it was what the subsequent scan showed that changed his life forever. Surf photographer Peter Chamberlain sits down with Travis a few years into his recovery to see how his view of the world has changed. 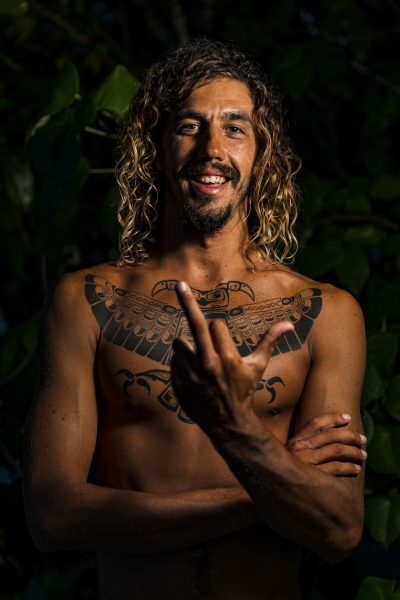 Time is relative – in the grand scheme of things we are are only on this planet for a very short period of time. What we choose to do with it is the question.

We all have ambitions and aspire to fulfil our dreams, but in reality, the best that most of us can hope for is that we live a long and meaningful life having worked in the same job, living in the same place and retiring happily.

Our mind spends most of the time lost in fantasies and illusions, reliving pleasant or unpleasant experiences and anticipating the future with eagerness or fear.

We never seem to live for the moment or live in the now.

But what if the rollercoaster of life dealt you a serious curve ball, such as a tumour deep within a critical part of your brain?

Meet Travis McCoy and discover the exceptional circumstance that changed his life forever, forcing him to re-evaluate his priorities to allow him to be able to follow his dreams.

But what if the rollercoaster of life dealt you a serious curve ball, such as a tumour deep within a critical part of your brain?

Trav, how are you feeling right now?
Right now I am good. I’m just sitting in Padang about to go back out to the Mentawai Islands and I am getting better – heaps better than I have been – but I am forever riding on waves of emotion and tripping out. The accident is something that changed my life within a split second. I went from thinking that I’m going to grow old and have a long and happy life to basically; I have this short time to live or, the best case scenario, will need to have an operation that will leave me physically impaired.

What brings you to the Mentawais?
This place is my second home. I will be coming back here until I am six feet under. The waves you surf. The people you meet. Also, I get to kick it with one of the best humans in the world. Diego (owner of Mentawai Surf Camp) is the best mate anyone could ever ask for. This place is where I feel the best and where all that medical stuff feels the most distant.

So tell us, what led up to the diagnosis from the doctor?
Well, me and one of my best mates, Divey, Alex Dive, were surfing our local spot back home in Mount Maunganui – my first surf in New Zealand waters having just arrived home from the Mentawais. This session had a strange feeling in the air about it from the start. I remember that morning. I woke up at 4am by chance and couldn’t sleep. I drove all the way to the harbour, about 50 mins from home, just to watch the sun rise. I sat on the hill. The swell was looking pretty big and had an angry look to it. So I called Dad (my old man surfs) and gave him a report. I basically said that it looked gnarly and the craziest thing was he replied, “Don’t worry about it. Just sit this one out.”

However, when I arrived home, Divey was fizzing for a surf, tow session, so I thought, “Fuck it. Let’s go.” This day, the surf was a mean, square 6-foot and closing out. We surfed a few until I got the last wave, which ultimately changed my life forever. This wave came through and it was bigger and thicker than the majority of waves, so we thought we would give it a crack. As I pulled off the ski and pulled under the hood, it raced off. Divey straightened the ski out and set it straight up on the beach to park it, so we could paddle. As I pulled under the hood, the wave made my fins skip and I landed on my back. I didn’t penetrate through the wave, but instead went back over the falls and landed on the fin of the board head-first. It basically tore my head right open leaving me semi-unconscious and blood gushing everywhere. I was rushed to hospital where I had 34 stitches to the head and a scan.

What was the diagnosis from the scan?
The scan showed that I had a tumour deep inside my brain. It’s pretty hard to say exactly what it is without them drilling into my skull to take a sample. But we do know that it’s growing slowly, due to the fact that I had a few follow up scans three months down the track and then another one after a year. They wanted me to have chemo and live surgery, but the risks were too high and could have left me physically impaired. It was hard to know what to do: leave it or try to fix it. Either way, it’s a cloudy road that is hard to digest.

Has it mentally affected you?
This has changed my life in so many ways and it has affected me massively. I have developed anxiety and a small bit of depression over it for sure. There are days when I can’t even sit still. My brain’s bouncing off of my skull and I look into the sky wanting to scream, “Why me?” and cry my eyes out. You go from thinking you’re young and fit, to basically … you’re dying. I have mentally fought my way back from the dark place I was a year ago. Some crazy thoughts have entered my head that to this day still send a shiver up my spine. But then you have to think, “I can do this. I am living with it: one of the hardest things in the world to be hit with. I guess I try to pat myself on the back, but it’s a hard road mentally and one that I thought I would never have to walk. But hey, I am here and getting better.

Has this changed your approach to surfing?
Yeah, it has. It makes me realise that what I have done over the past eight years was so right.  I have travelled every inch of the globe surfing the best waves it has to offer. I don’t have a house, a wife, kids and all the rest, but I have fulfilled my biggest dreams. When the waves are big, I sit there and think about what I have been through. Nothing is scarier than that, so I put my head down and just go. I think, “this swell will be gone tomorrow. This wave won’t be coming back. Who knows how long we have on this crazy planet, so just send it.”

The ocean is the world’s most powerful medicine for sure. Without surfing, and the rhythm of the waves, I don’t think I could have mentally overcome this and be where I am today.

My wise words are, “go and live your dream and do it now. Tomorrow isn’t a given and you can’t buy time when things get heavy”.

Thanks for sharing your story, Trav.
Cheers legend. Peace.

“Go and live your dream and do it now. Tomorrow isn’t a given and you can’t buy time when things get heavy.”

Travis McCoy is the owner of South Pacific Surf, which is based in Mount Maunganui. Travis has a long lasting love for the art of surfing and wants to take everyone he can on the journey to experience the magic surfing has given him. He started surfing at the age of 11 with his father and got hooked. That sent him on a journey that would take him through Ireland, Mexico and finally Indonesia as a surf guide at Mentawai Surf Camp where he learnt the ins and outs on running a successful business in the art of chasing waves.

Peter Chamberlain is a surf photographer whose work has appeared in numerous magazines throughout the world. He is based in the United Kingdom and splits his time between shooting weddings, editorial and surf. You can find out more about him right here.