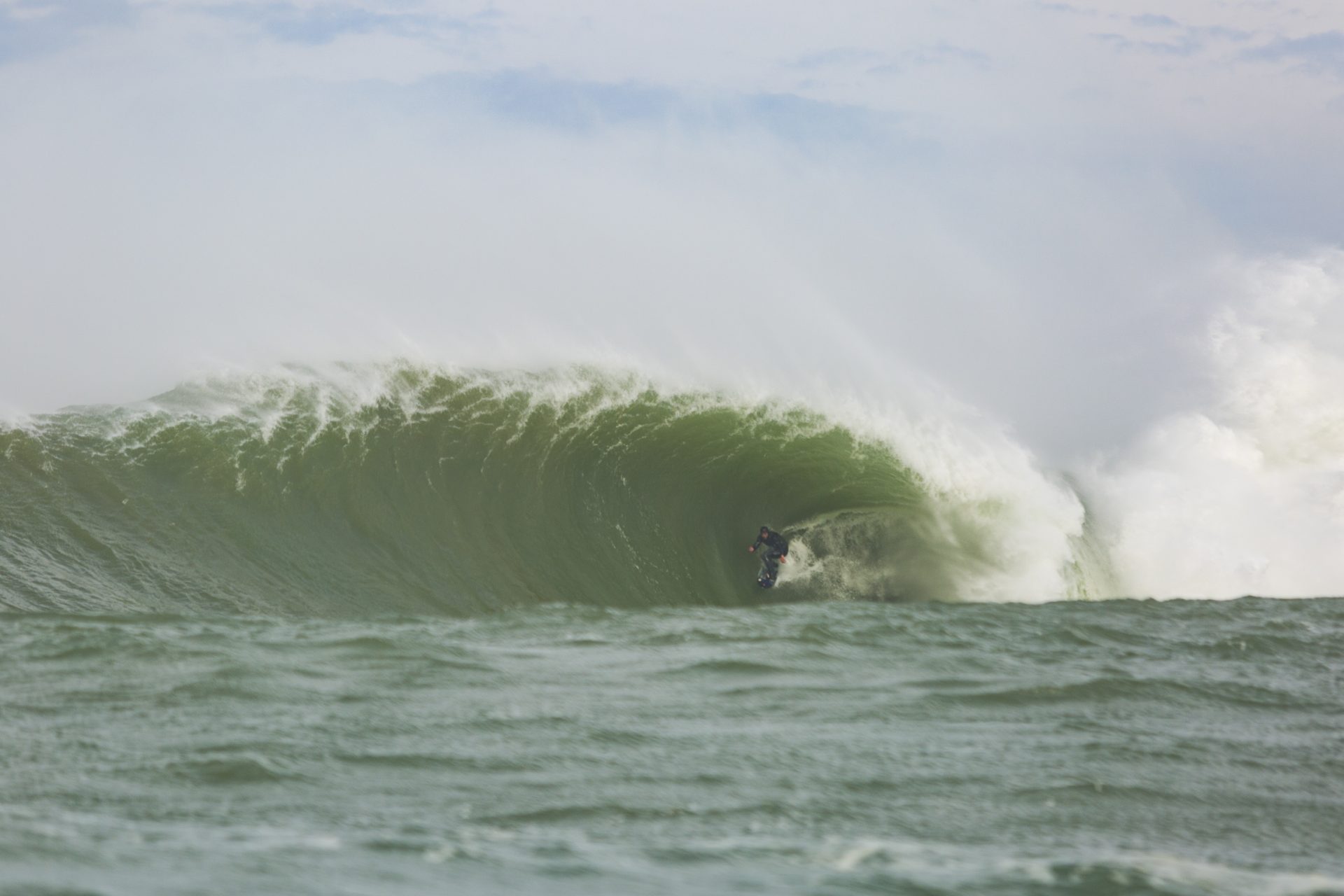 Bobbing around on a jet ski near a reef off the southernmost tip of New Zealand’s South Island it dawned on me that I had been drawn here like a moth to a flame. Each passing set of waves grew in size and intensity and started to look more like the megaswell we were promised.

A few days earlier Australian waterman Ross Clarke-Jones had been sitting in his home at Bells Beach, Victoria, when the phone rang.

“Ben Matson from Swellnet called me and said, ‘what do you think of New Zealand?’”, laughs Ross. “I wasn’t even thinking of it. He said it was going to be massive and that was all I needed. I called Doug Young and he had skis lined up and I was on my way.”

Ben Matson uses a wide range of tools to forecast surf conditions and, in the Southern Hemisphere, he monitors the progress and pattern of the “Long Wave Trough” – an upper-level atmospheric wave that helps “steer” weather systems at the surface.

“For the weeks preceding this particular swell event, the Long Wave Trough had amplified in the Southern Indian Ocean, generating a series of intense storms, but most of them were initially aimed towards Indonesia and southern Australia,” Ben explains. “These patterns usually migrate slowly eastward, so I knew that the storm track would eventually slide into southern New Zealand’s swell window at some point. The tricky part is identifying the right window where the swell peaks and the winds are favourable.”

We were focused on the size of the swell more than his prediction of very strong offshore winds. And so Kiwi big-wave chargers Doug Young, Sam Hawke, Andy Eman and Dan Smith were joined by Ross as we waited for the long-period swell to kick in. Kenny Kennedy and Kevin Haugh piloted the safety skis.

Dan, or Delta as he is better known, was first into the toothy peaks and managed to ride some wild pits as the wind started to intensify. By the time Doug and Ross had entered the line-up the wind was whipping the peaks into an intense and consistent horizontal torrent. Kenny and I got blown clean off our ski by one gust, swam a bit, regrouped and tried to hold position in some of the wildest weather I have ever experienced. Then the big sets began to march in, feathering hundreds of metres out the back in swarms of three and four. The whole ocean was alive and seemed barely habitable when Ross managed to fling Doug into a giant set. We still don’t know how he managed it but he rode that thing all the way into the stinging spray and into the bowl of death before popping out the end. By now the conditions were so wild Ross made the call to try another spot. I was relieved and probably not the only one.

“The morning session was radical,” recalls Ross. “I have never seen wind like that. I was doing wheelstands on the jet ski and getting airborne. It was really dangerous and wasn’t fun at all. You couldn’t see anything – it was actually unsurfable. I did see a couple of amazing waves – I don’t know if you could have caught them, but it was a real wave.”

It was Ross’s first surf back since he blew the ACL and MCL ligaments in his knee while tow surfing four months ago. Instead of surgery he opted for Keiser training.

“It’s non-invasive – more like a method of weight training, but really slow – around two-minutes and the weights are counter-balanced at the peak of the movement. As a result I’ve now been towing, snowboarding and surfing without the surgery.”

I have never seen wind like that. I was doing wheelstands on the jet ski and getting airborne. It was really dangerous and wasn’t fun at all. You couldn’t see anything – it was actually unsurfable. I did see a couple of amazing waves, but I don’t know if you could have caught them.

Ross is fresh from a trip to big-wave spot Nazaré, Portugal, to put things in motion for the impending Northern Hemisphere El Nino winter. Nazaré is where some of the biggest waves in the world are ridden and Ross is lining them up.

“I’ve been setting up my ski with Mark Matthews. There’s a bit of bureaucracy to go through over there to register a ski – it’s a safety issue and it’s good because that place needs it,” he admits. “I prepared all my boards and I go to Hawaii in a month or two and will base myself between there and Nazaré.”

“I rode this same board last year at Nazaré, but I’ve made it a bit narrower,” he says tracing an arc on his red tow board. “I took three there and narrowed them a bit – you don’t need them too wide because you’re going so fast and trying to lean over is so hard if they’re too wide. So I narrowed them and filled them with lead. I bought 100 Euros worth of lead – a big pile – for my three boards. That offshore we had today – sometimes it is like that at Nazaré. Maybe not quite like that offshore this morning – that was another league.”

The southern reef hadn’t delivered for us, but the lads pushed through, driving in their wetties, to another more protected reef’s airbrushed walls. And the rewards came.

“We jagged a window with a couple of waves with big walls and it was like snowboarding,” Ross explains of his session. “It was clean on the face – we got a window of good wind, but we also got hail, had lightning crashing around us and driving rain. The biggest wave I got was in a full hailstorm. It was all worth it though,” laughs the 49-year-old. “I’m making the most of it – you have to.”

Ross has been asked once again to compete in the Eddie Aikau big-wave surfing invitational in Hawaii – an event he won in the 2000/2001 season.

“The Eddie Aikau is my priority and the whole North Shore is likely to be erupting this winter. It’s forecast to get really big this season, but we will be limited to Log Cabins and maybe Jaws although Jaws doesn’t get any taller – just more evil.”

Ross reached global fame with his Storm Surfers series and movie, but it’s more about the surfing for him these days.

“Storm Surfers took a lot of my time and we had to be where we were told to be. So I really enjoy being able to be a bit more free like with this trip. We didn’t even record it and I didn’t care about photos or anything – I just wanted to go surfing with Dougy. It’s nice that we captured it, but we’re not relying on doing this for the cameras – we’re doing it for ourselves,” he offers. “I said to Dougy, I don’t care if I only get one big wave I’ll be happy. He’s the positive club so it was pretty cool.”