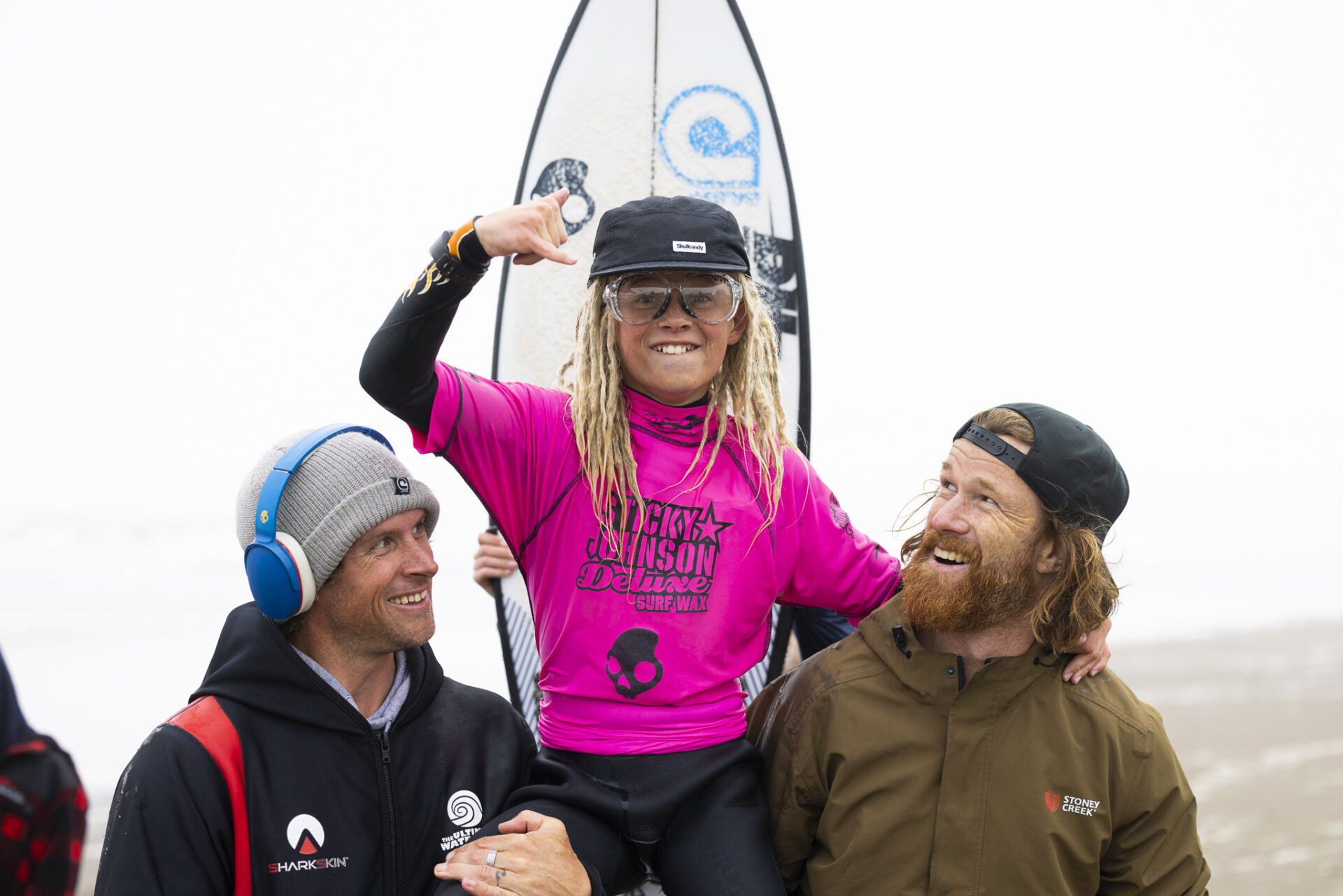 Indica Corcoran and Alani Morse win the premier divisions at the New Zealand Primary School Championships at the weekend as local Archie Alder and Ohope’s Celia Martin claim the younger Year 6 and Below Division titles.

The Sticky Johnson Primary School Championships presented by Skullcandy was held at Midway Beach in Gisborne with surprisingly good conditions across the Saturday and Sunday with a small southeast swell finding light to offshore winds as a storm’s eye paused over the surf city for the weekend.

The event adopted a round robin format for its preliminary rounds, providing competitors with three opportunities to impress before heading into the knockout portion of the event.   Rain tried to dampen proceedings but the best young surfers in the country had a blast as the wave quality remained fun throughout the event window.

Mount Maugnanui’s Bay Boardriders defended its title as the top club for the third time running.

In the Year 7 and 8 Boys Division, it was Indica Corcoran that surfed to a last-minute win with a 13.50 point heat total.

“That’s my first title at this event and it feels unbelievable, it doesn’t even feel real at all,” said a beaming Indica Corcoran.   “It’s just something that has been on my bucket-list ever since, like seven years ago, this was the first event that I ever did so ever since then, that’s when my dream to win this started.”

It was a 6.0 point ride that sealed the win with Corcoran needing a 5.51 on his final wave to take the top spot from commentator, Simon Fritchley’s son, Sol. Sol had carved an impeccable run to lead right into the dying moments of the final. With the onshore winds, Corcoran couldn’t even hear the scores and admitted to the some nerves in the dying stages.

“I couldn’t hear the scores and I saw everyone getting good scores and I got nervous so I had to hunt it out. Then I got that buzzer beater at the end and it was a six or something. Then I heard when I came in that I won and I was just like, ‘wow’”, said Corcoran after the final.

Fellow Mount surfer Sol Fritchley dropped back to second in the final after surfing to the highest single wave score of 8.50 early in the heat. Sol finished on 13.50.   Kaikoura’s Sonny Lyons finished in third ahead of Remy Sale (Mnt) in fourth.

Raglan’s Alani Morse surfed to her third Primary School Championship title this weekend. Morse won the Year 7&8 Girls Division with the highest heat score of the day – 13.90 points out of 20.

Morse started the final well with a 7.5 before falling behind eventual runner up Lola Groube (Pau). However, it was a late backhand wave that netted Morse 6.40 to jump back in the lead and win the heat.

“I’m pretty stoked – I got a couple of nice scores and pulled through, yeah I am psyching”, smiled Morse afterward.   “You know, the worst conditions bring out the better surfers and all the girls in the final were ripping. I was getting stressed out at one point and I didn’t know if I was holding it down, so I just had to surf as good as possible until the final hooter.”

Local Gisborne surfer Archie Alder stormed out of nowhere to claim the Year 6 and Below Boys Division.

Alder rallied to the cheers from family and friends on the sand dunes surfing to a 9.57 point heat total. Round-robin standout Beau Broadhurst couldn’t find the form that saw him win his prior four heats and he had to settle for second place on 8.53 points. Gisborne claimed another finalist in Harry McFarlane who finished third ahead of Haru Marsden (Mnt) in fourth.

Mahia surfer Celia Martin took out the Year 6 and Below Girls Division with superb style in the final surfing to a 9.67 point heat total. Martin battled her way from second into first midway through the final, leap frogging Megan Luke (WGM). Luke held the lead early finishing with an 8.70 point heat total ahead of Millie Dyck (Mnt) and Riley Miskell (Ohope) in third and fourth respectively.

Jack Of All Trades, Master Of Most: Jack...